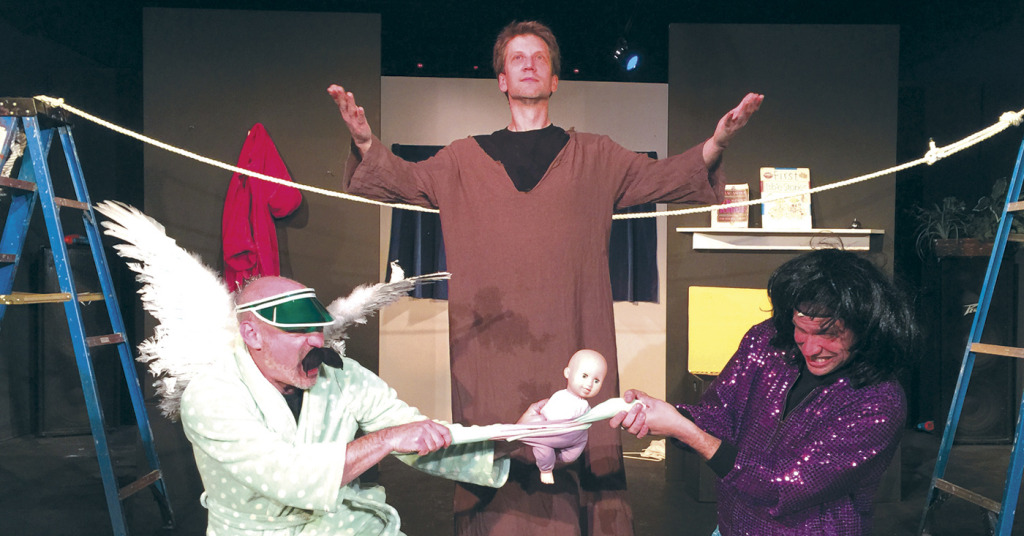 It’s a long way from Eden to Armageddon. The King James Version of the Bible contains 66 books broken up into 31,102 verses. That’s way too much material to cover in a single night of theater, so Reed Martin, Adam Long and Austin Tichner, of The Reduced Shakespeare Company, did what that company does: they cut the Good Book down to size and built a fast-moving set of comic sketches around a host of familiar texts.

“The Bible: The Complete Word of God (abridged)” opened last weekend at The Alley Theater in a fast-moving, laugh-out-loud production that runs through mid-January (assuming divine retribution doesn’t cut it short before then).

The Alley is pretty much the perfect company for this play. Though the company mounts all kinds of productions, it has a particular affection for pop culture parody. Their production of “Point Break Live” is a legend among those who saw it, and in the years since, they’ve offered send-ups of “Star Trek,” “The Princess Bride” and more.

The Alley’s “Bible” has a playful, improvisational feel that heralds some serious comic craft at work. It opens to the strains of Richard Strauss’s “Also Sprach Zarathustra” and a tableau of fig leaf-clad actors in statuesque poses. A stentorian voice announces: “Lo, the actors put their clothes on and the audience was well-pleased — and we’re off and running through a guitar-laden blues-rock take on the Genesis creation story that suddenly finds the Lord morphing into a fire-and-brimstone preacher giving humans dominion over the land and fishes, the power to reason and a cascading cornucopia of divinely dubious gifts that run the gamut from Oxycontin to shopping mall to ozone depletion to CSI on every TV channel.

The pace of the Genesis stories is so fast that the play might win favor with creationists who think the world is only 6,000 years old. Or perhaps not, since a recurring joke (with a superb second act punchline that involves some very fun audience involvement) has to do with Noah’s Ark — complete with delicious local references to Kentucky’s own Ken Ham.

The spirit of the sketches isn’t especially new. Many of the sight gags and ideas (and most of the groan-inducing puns) channel the tone of early American TV and pre-“Monty Python” British comic revues like “Beyond the Fringe.” But maybe a more intentional reference is to the old-fashioned Borscht Belt story-tellers and stand-up comics of old. The three actors — who play myriad roles over the course of the ninety minute production — certainly have the chops for that kind of comedy, and for the musical segments that punctuate the action.

There’s no way to track all the roles played by these folks — scenes slide from the murder of Abel to the parting of the Red Sea faster than roomful of Easter rabbits begetting more begetters (though a hand-out detailing the line of descent from Adam through the sons of Noah comes in handy for those who are trying to keep track).

But as for the players, Joey Arena often serves as the de facto narrator, offering implausibly wild interpretations of the texts with a sly, dry wit that cloaks madness in calm reasoned tones. J.P. Lebangood dons long flowing wigs to play many of the women of the Bible — and there are plenty of them to play (he also often takes on the role of a clueless naif). Scott Davis brings a pesky intensity to his enduring focus on getting the stories straight — and making sure the Ark story gets its due. And because the production has no compunction about breaking down the fourth wall, it’s worth mentioning that Sterling Pratt serves a quasi-visible role as stage manager and technical director.

It’s an amusing ride. And the theater experience at The Alley Theater is decidedly fun and informal. As you walk through the lobby, you smell fresh popcorn (the first bag runs a mere three bucks; refills are free). The concession stand offers not only an assortment of candy bars, etc., but also a small assortment of craft beers.

“The Bible: The Complete word of God (abridged)”
Through January 17
The Alley Theater
thealleytheater.com