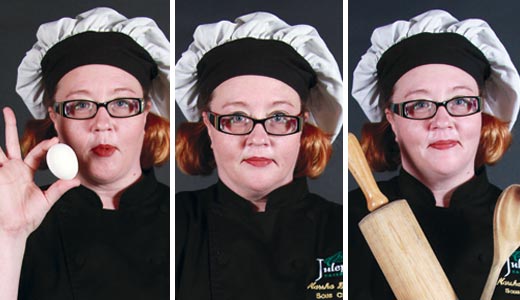 That scene in “Jaws.” You know the one – Quint and Hooper are comparing scars attained from shark-hunting: “You wanna drink?” “I’ll drink to your leg.” “OK, so we drink to our legs!”

Comparing cooking scars is typical after-hours cook talk. We often have ladders of oven-door burn stripes on the insides of our forearms. Then there are the little toothy marks the film wrap cutter strip leaves when it bounces against your wrist. Blisters. Knotted burn scars on the webbing between your thumb and forefinger from over-enthusiastic sautéing. Blackened fingernails from smashing your pinky between the wall of the walk-in and a hot rondeau. Toenails in the process of falling off because someone dropped a case of frozen chicken on your foot. A guy I know was breaking down onions in a Robot Coupe and just stuck his fingers a little too far down the feed chute and: hello, fingertip, meet rotating blade.

A friend of mine was once unfortunately arrested for a minor offense, and the police officers at intake accused him of being a crack smoker … because his fingerprints were somewhat obscured, or flattened, and I guess — as we found out later — crack smokers often burn their fingerprints off while holding a hot glass pipe. We cooks typically have “hot hands,” which means we are able to pick stuff up with our bare hands that home cooks and normal folk would never pick up, and our fingerprints get seared off, temporarily. My friend was in no way a crack smoker, but his bald fingerprints made the authorities suspicious.

When I was a culinary student at Sullivan, I had the honor of assisting a guest chef demo in our newly minted Kitchen Theater. The chef that day was preparing lobster. Now, bear in mind, real chefs don’t avail themselves of silly props like garlic presses or shell-cracking tools. Real chefs use their chef’s knife for almost everything. So when you’re breaking down lobster claws, you use the back of your chef’s knife to break the claw shell, then you (hopefully gracefully) remove the claw meat from the claw shell with a seafood fork or something similar.

I was super successful at cracking the claw shells with the back of my knife. Then I promptly sliced the side of my thumb open on the serrated edge of the broken lobster shell. I started to bleed, but I still needed to keep going, removing the claw meat from the shell. I wrapped a paper towel around my thumb. That towel became sodden with blood almost immediately. And there my hand was, in glorious 20-foot technicolor, bleeding into a paper towel. I finally had to bail, and the chef had to finish up with the lobster meat by himself. I was mortified.

There just aren’t that many professions where everyday injuries are an accepted, normal part of the job. I imagine doctors and nurses and EMTs get a lot of injuries from flailing patients. And I guess athletes accept daily injuries as a given. We cooks wear our battle scars as badges of honor. Backs get sore from lifting five gallon containers of dressing onto a top shelf of the walk-in. Shoulders ache from carrying used fryer oil out to the oil dump, which a service will pump out later in the week.

Restaurant cooking isn’t “The Deadliest Catch,” but it can still be pretty painful on a day-to-day basis. Please remember that many of us don’t have or can’t afford proper health insurance. We don’t have life insurance, and burying us in the back yard isn’t really an option for our wives, husbands and partners.

Cardboard boxes can cut. Aluminum foil cuts are exquisitely painful. Sometimes we just put superglue on a cut, or if there’s NewSkin in the first aid cabinet we count ourselves lucky. If you get cut badly during a heavy service, you just wrap it up in duct tape and carry on. And there are never, ever enough bandaids. There aren’t enough bandaids in the world to stock all the first aid cabinets in every restaurant. Just know that if we cut ourselves we immediately throw away all the food product that could possibly be adulterated by blood or bodily fluids. You don’t want us to save it, and we don’t either.

If you want to reward the cooks at your favorite restaurant this holiday season, buy them four boxes of band-aids in varying sizes. We’ll remember you forever.

That scar we’re sporting was no boating accident. It’s a result of pure love for what we do. Happy New Year, everyone.