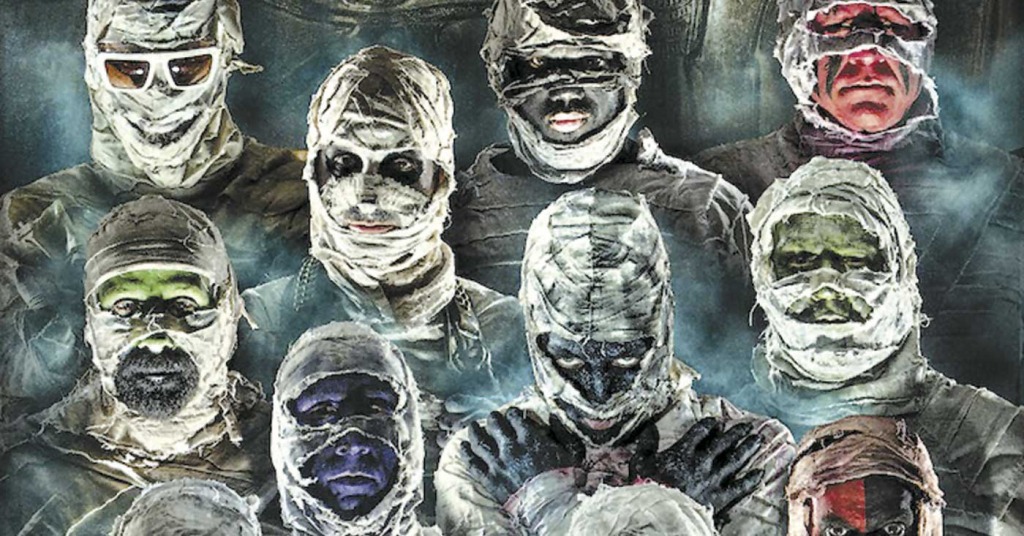 Here Come the Mummies is a live show that’s 5,000 years in the making. According to lore, the boys were unearthed and dusted off in the 1920s by Professor Nigel Quentin Fontenelle Dumblucke IV (b. 1895 – d. 1993), and they’ve been rocking stages all across the country nonstop since. Their music walks a fine balance, primarily focusing on one of the band’s two favorite topics: their ancient Egyptian heritage and sex, all filtered through a prism of 70’s funk. At least that’s the story.

In reality the band is an anonymous group of Nashville studio musicians that supposedly keeps their identities quiet to prevent contract squabbles between the myriad of labels each member is signed to. Somehow, the truth seems as fantastic as the lore — it’s rumored that there are over 100 Grammys between them and we’ll never know who they are.  But the band’s drummer, known only as Java, spoke with me about all things Mummy.

LEO: Having heard millennia after millennia of musical trends, what made you all decide on 70’s American Funk?

Java: All we are after, baby, is sweaty dancing women: no more, no less. Over the millennia, we have always tried to play the genre that best accomplished that, so when the 1970’s funk bomb fell, it just felt right. It could be argued that we should move more towards EDM for dance maximizing, but old, undead dudes in lab coats sitting behind laptops just seems wrong. Besides, early experiments in EDM just led to too many half-eaten wires during shows.

LEO: It’s been a busy couple of years for anyone, much less for a bunch of 3,000-year-old men; since 2013 you’ve released one full album, four EPs, a concert film, and have consistently toured. Where do you all find the energy?

Java: Our energy source is libido. We tried alternate energy sources, but the sun burns us, it is hard to funk in a wind tunnel, and oil just tastes bad.

LEO: Tell me about the decision to put out four EPs in one year, and give them all away for free.

Java: You’re young. Do you buy music? Thought not. It is not just our EPs we are giving away, but our entire catalog. The EP model was fun, because it allowed us to constantly put out new tunes all year, though we will see if we have the time and sanity to continue it.

LEO: You all are based out of Nashville; what is it about Music City that makes a Mummy want to build his crypt there?

Java: Two factors: it is a great touring hub, and the cold air conditioning in recording studios helps us not decompose.

LEO: I’m guessing you all named one of the EPs Shocker, because people are “shocked” the first time they see how good your live show is. Is this an accurate guess?

Java: That is a more noble guess than the truth. Your readers will get a more accurate answer from UrbanDictionary.com.

LEO: Have you had the opportunity to try Kentucky Bourbon yet?  If so, what do you think?

Java: I am so the wrong mummy for this question, but I know that our baritone sax man, The Flu, discovered Kentucky Bourbon a couple decades ago, and he is now completely covered in it.

LEO: The ladies are always a temptation for you all, but how do you avoid the temptation of drugs?

Java: Easy, drugs make us either feel terrible or hornier than is containable.

LEO: How important was Prof. Nigel Quentin Fontenelle Dumblucke IV to your career?

Java: Were it not for Dumblucke, we would still be rocking underground, baby … and there is a dire lack of beauties in the dirt.

LEO: Tell me a little about the gentleman that inspired the classic ode “Wiener Man.”

Java:  You mean Uncle Chuck? He was a wiener-roasting serial killer, but otherwise a jovial guy.

LEO: Being raised in ancient Egypt, a country that had its own share of political turmoil with King Tut and Cleopatra — how does America’s current state of politics compare?

Java: Baby, we stay away from politics. There are [so] many of us that our political thoughts run the entire spectrum. Thus, we are guaranteed to piss everyone off.

LEO: Which smells worse, decomposing or the bus after a show?

Java: They are one and the same, but just imagine the mixture of decomposition and late night pizza.

LEO: My mother has seen you all twice, and I can’t bring myself to explain to her what a “Freak Flag” is, can you help with that?

Java: Everyone … your mom included … has some naughty secret needs. Whether it be cross-dressing, a love of spanking, urolagnia or retifism, we say let the beast out to walk in the street.