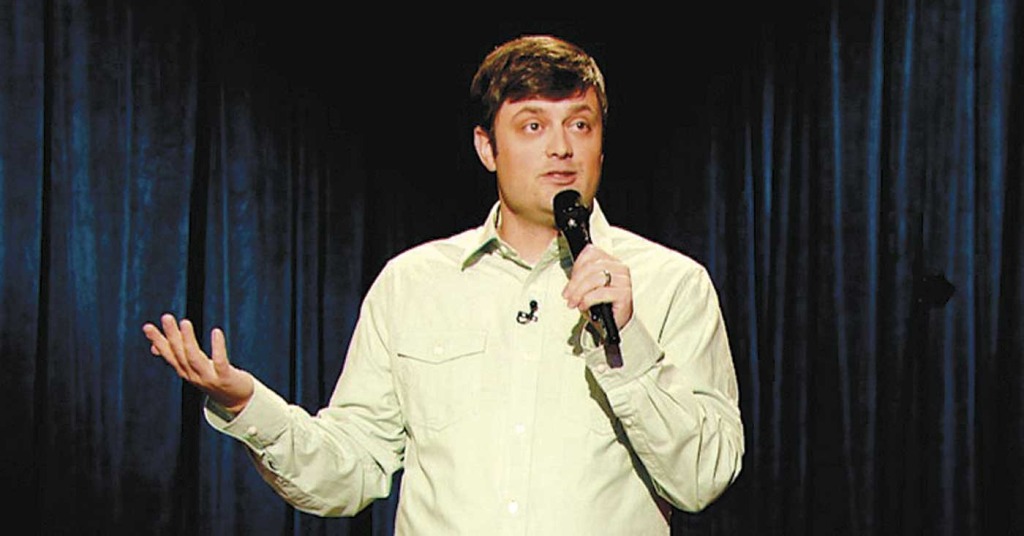 If, like Bruce Lee said, “Life is like water.” Then Nate Bargatze is on Jurassic Park vibrating as the all-consuming T-Rex of fame approaches to his flank. You might not recognize him now, but you’ll definitely remember him later. After years of playing the road, club gig after club gig, Bargatze refined a sharp witty perspective on the world and a whole dump truck full of top notch material. He was given his own Comedy Central presents … special, plus he has appeared on Late Night with Conan O’Brien and The Tonight Show with Jimmy Fallon several times already. He has also been name dropped during interviews by comedy giants like Marc Maron and Jim Gaffigan, in publications such as Rolling Stone and Esquire, respectively. Bargatze took a few minutes to call in and talk about his Louisville roots, the upcoming weekend of shows here, and a few other odds and ends.

LEO: We are really excited about the shows.
Nate Bargatze: Oh, me too. My entire family is from there, my parents are from there; they grew up there, both of them. So almost all of both sides of my family is in Louisville. A couple of us live in Nashville, which is where I was raised; but being there right before the holidays works out perfect, so I can just stay through with them.

LEO: Your father was a clown and a magician, what was that like growing up?
NB: Uh, it’s different. He’s still a magician, he hasn’t been a clown for a long time, but when I was a kid he was still a clown. It’s funny when I talk to people, because it wasn’t weird … that’s just what I was born into. I thought it was normal, I felt like everybody’s dad was a clown.

LEO: Him being a magician and snooping in his bag and learning the tricks of the trade, did the world get demystified for you early on?
NB: It did do that. I can’t perform any magic tricks, but I do know how a lot of them are done. Magic was never something I got into, ya’ know? I could just see it at home, so I don’t think I ever really seeked it out. I’m growing now to appreciate it more than I used to as a kid. It’s all kinda come full circle. Now, also I know how much I travel on the road doing gigs, I kinda realize that’s what he was doin’, too. And I realize how hard he worked. I didn’t get it as a kid, but now I get it; I’m sure he did a lot of really bad gigs I didn’t even know about just to support us.

LEO: You studied at Second City in Chicago. I have to imagine that, as a young performer, it has to be incredibly intimidating to step on that stage knowing who all has come before you.
NB: Yeah, it’s crazy. There’s so many huge names that come out of there, the most famous people in all of comedy go through there. It’s a lot, being young, 23 – when you’re just along for the ride and don’t really know what’s going to happen. It was really special.

LEO: Do you have a show that stands out as the worst?
NB: One time I did a show with my dad in Nashville, he had me come open for him. It was at like noon at the Opryland hotel. I had to be there at like 10 in the morning, I finally go on people are eating, the lights are on – I’m in a big room with like 500 people, no one’s paying attention, and I’m literally talking to nothing. I’m watching people hug, greeting each other; if you asked them later about me doing comedy there, they would have no idea. I was in the midst of talking to no one, then I brought my dad out and he did great. So I think he did that on purpose, I think he wanted me to set him up so he’d have a great show by letting me be the one that goes out there and just bombs.

LEO: Is it strange having guys you used to look up to talking about and promoting you?
NB: Yeah, it’s very weird. In comedy you always feel like you’re one foot out the door, and just waiting for the comedy business to come in and say, “Alright you had fun, now get out … we have to get back to work.” So having guys say stuff, like Fallon who has been very nice, it’s unbelievable. Even getting to where you’re kind of friends with those guys, and you dig so much what they do; it’s surreal. But it’s also what you want, what you’ve been working for, because in any profession you want the respect of your peers. So yeah … it’s the nicest, strangest and best thing ever.