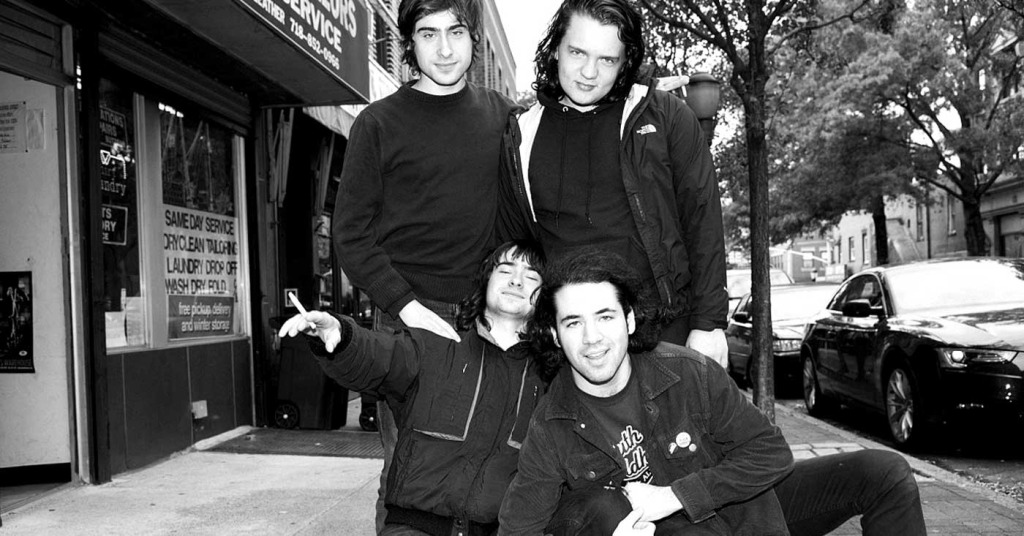 In many ways, White Reaper is the living embodiment of catchiness, at least as filtered through a surf-punk aesthetic. There is kind of a sneering Ramones-meets-Beach-Boys-while-bent-on-caffeine sound, an entirely kinetic affair that uses strong hooks and undeniably memorable melodies at every turn. Relatively new to the Louisville scene, White Reaper has been making big waves over the last year, and understandably so. Just this year the boys released their self-titled album on the Polyvinyl label, put out a video for their track “Cool” — which lives up to its name — and toured throughout the year.

Singer/guitarist Tony Esposito has fond memories of their start.

“Ryan, our keyboardist and I sat around in my basement for weeks recording songs over the summer before I went away to college with Nick, and one of those songs actually ended up as the first track on the EP,” he says. “Nick and I went to school and tried to be a guitar/drum duo playing the songs Ryan and I wrote but school totally sucked and we dropped out after one single semester and moved back to Louisville. We got Nick’s twin brother Sam to play bass and Ryan joined back on keys.”

Keeping with that breezy ease by which everything else has seemed to cohere, Esposito had an equally pragmatic answer to the origin of their name. Like so many good things, it just kind of fell together.

“We walked around Halloween Express and stole “White Reaper” off of the price tag of some cheap Halloween decoration,” he says.
Of their rather infectious and dynamic sound, he explains, “That same summer we sat in my basement and recorded these super simple songs, we would write them all in about half an hour — lyrics and everything. If we couldn’t figure out a song in less than 45 minutes we basically just gave up and started a different one. We didn’t really think about whether or not it sounded like Louisville, I just thought it was fun writing songs as quick as I could.”

His expectations were simple going in and have remained so. Despite having crafted one of the most fun bands of 2014, Esposito has a laid back take, and one with plenty of promise for things to come.

“I really just expected to be writing songs in half an hour in my basement and I still am, and I think I always will,” he says. “We really just want to make the music that we want to hear.”

Of course, it’s not just Esposito cranking out the hits.

“I record really rough demos that I send to everyone else, and if they like it, we learn it,” he explains. “There are some songs like ‘Cool’ that Ryan and I worked on together, or ‘Funn’ that Nick and I did together, but for the most part I just send the guys some songs and then we learn them as a band.”

Writing in the basement has taken him far. Regarding their video for “Cool,” a goofy and sometimes provocative production, Esposito remembers, “Zach, our manager who directed the video, came to us with an idea and he really just made it happen. We got all our friends to hang out in this weird upstairs storage kind of attic type room and we just filmed ourselves going nuts in black and white. I got slapped pretty hard a couple times so that was cool.”

As for the lyrics, well, that’s slightly more ambiguous. Esposito knows where his head was upon his writing, but has a sublimely it-is-what-it-is approach to the specific content of his songs.

“I suppose some songs are about certain people or about certain things or about certain feelings, but it really doesn’t matter if people get it or not,” he says. “I’m more interested in the way lyrics sound than what they’re supposed to mean. People should take whatever they want away from art because everyone sees things differently and you never know what anyone else is thinking.”

Between their amazing debut album and that video, the boys managed to win not one, but two awards from the second annual Louisville Music Awards. In what has become increasingly obvious fashion, Esposito and crew were surprised, but relaxed about the whole thing. Regarding their two wins, Esposito humbly recalls that is was, “very goofy. We had no idea we even had a chance at one award, let alone two.”

The band certainly has the right help in manager Zach Hart. This last summer, the band signed with indie label Polyvinyl, home to bands like Deerhoof, Of Montreal and The Rentals.

“Our manager is friends with the label manager and he was able to convince them to let us audition,” Esposito says. “Playing that show was the most nervous I’ve ever been in my life, but everyone at Polyvinyl is so laid back, they’re the best label to work with and we absolutely couldn’t be happier.”

Having such a successful freshman outing leads inevitably to questions about the future. What comes next for a band poised to conquer? Per usual, Esposito keeps an even keel: “We’re very excited to be recording a full length in January with Kevin Ratterman; it’ll probably be ready for a release around summer time. It’s gonna be real rock & roll, and we can’t wait to finally make it.”

Still, White Reaper seem apt to set a high bar for their live sets. Esposito muses, “I think the audience at rock & roll shows should be expected to perform on the same standard and at the same energy of the band, and sometimes that happens and sometimes it doesn’t.”

You can see that play out this weekend as White Reaper takes the stage with Cincinnati trash-poppers Tweens and Louisville Gothic-wizards Old Baby. Esposito has high hopes and thinks you should too, adding, “Well, we got a shitload of new songs and we’re super excited about playing Louisville again, especially with Tweens and Old Baby. Also, it’s the first time we’ve ever played in town on a Saturday night so the stars have kind of aligned in a perfect way and we really can’t wait.”