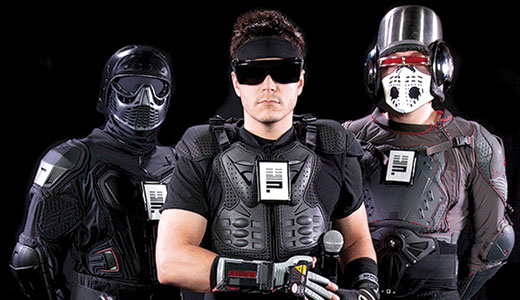 For the last decade, Ultra Pulverize has made some of the weirdest, most compelling electronic music in Louisville — or, for that matter, anywhere. To give you an idea of what to expect, singer Ultra identifies the composition of their band as including, “synths, a theremin, beat machines and samplers. And my mouth. Tony Robot plays all the beats and rhythms by hand, not sequenced like a lazy baby.

“The band began as a byproduct of a video project in 2004, then became a social experiment of sorts in the form of live shows,” Ultra says. “Over the past 10 years, it has evolved into a polished electronic machine that continues to deliver entertainment to brains.”

And, as Ultra Pulverize has grown as a band, the audience reception has changed. “In the beginning, most people didn’t know what to make of us, but that just made us more excited — weirding people out. Nowadays, fans know what they’re getting into for the most part. It’s still fun to see that what-the-hell-kinda-music-is-this face on some people every once in a while. There’s nothing difficult about having a good time doing what you feel like doing onstage, especially with the continued support of the lovely Louisville community.”

In addition to their lengthy catalog, Ultra Pulverize has become notorious for their entirely appropriate live re-scoring of “RoboCop.” Born from a clear love of the source material, Ultra explains, “Everyone is urged to join us in giving thanks to ‘RoboCop’ at Headliners on Thanksgiving Eve. Humans attending the show will also be entered in a free raffle to win a gift basket including donated robot movies and a gift card from Wild and Woolly [Video], and also our discography with an Ultra Pulverize slap wrap bracelet. We have no plans on releasing this score as of now, and we don’t know if and when it will happen again in Louisville’s near future, so see it while you can! Can you fly, Bobby?”

You can catch them tonight at Headliners and pick up their new album, “Toxic Vacation,” available now.