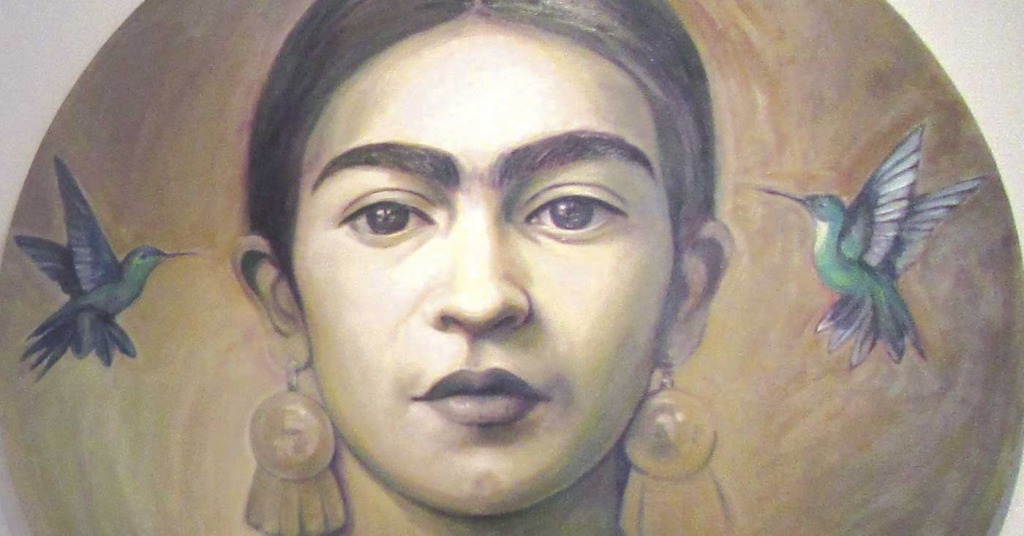 'Homenaje a Frida' by Diane Kahlo

Madonna wanted to portray her. Jennifer Lopez too. Salma Hayek won that battle and received an Academy Award nomination. All for the admiration of Frida Kahlo, an artist as famous as her unibrow.

As with many artists who get reduced to one or two identifying factors – ear/Vincent van Gogh, white wig/Andy Warhol, short/Henri Toulouse-Lautrec – Kahlo is much more than an ad for hair removal. She has firmly earned her place as one of the most expressive artists in the 20th century. Kahlo’s so beloved that on the 60th anniversary of her death, the exhibition “En el Espiritu de Frida” has opened as a homage.

Who is Frida Kahlo? She was a Mexican painter who specialized in self-portraits. Another piece of shorthand besides the unibrow: horrific bus and trolley accident as a teenager. Practically every bone in her body was broken and a metal handrail pierced her torso. She should have died; instead, she went through a series of surgeries and body casts that caused her a lifetime of pain. Her art gave her some release from both the emotional and physical turmoil.

The five artists in the show are Pilar Acevedo, Diane Kahlo, Joe McGee, Mari Mujica and Jacque Parsley. McGee and Chuck Swanson of Swanson Contemporary are the catalysts behind the exhibition. Swanson connected the dots between McGee’s interest in Kahlo, shown in such work as “Frida and the Agave Plant,” and Diane Kahlo, a distant cousin of Frida’s who lives in Lexington, Kentucky. McGee got the ball rolling and curated this show to honor Frida.

Diane Kahlo’s five-foot round oil on panel painting of her relative is the centerpiece of the show. Diane is the first to admit the name “Kahlo” comes with expectations. “Sharing the same surname has made the influences more complex, and at times somewhat difficult,” she writes, “knowing that there will always be the obvious questions, knowing there will even sometimes be comparisons.” Addressing the issue head on with “Homenaje a Frida (An homage to the life of Frida Kahlo),” she states it is, “a tribute to the woman, the artist who has so profoundly influenced my own work.”

McGee says, “Pilar is the star. She had a solo show at the National Museum of Mexican Art [in Chicago] this year. Wish we could have gotten her paintings down but her husband is ill … I was not sure she would be able to participate as [the show] got close, but she really produced such a strong series of drawings right in the final weeks … “ An excellent example of Acevedo’s conte and charcoal drawings is “Wings to Fly, No. 2,” a portrait of herself as a child from her passport photo.

Mari Mujica’s untitled “body” of chicken wire and used tea bags alludes to Kahlo’s life story. “It is a museum [quality] work in my opinion,” states McGee, “with direct references to the corsets Frida used in her many surgeries and recovery.”

Those who are familiar with the art of Jacque Parsley knows she’s included images of Kahlo in her work for years. Her “Fibromyalgia in Frida Kahlo’s Life and Art,” a collage that references Kahlo’s injuries, is typical Jacque.

The University of Louisville also contributed to the exhibition. Dr. Christopher Fulton wrote the essay “WWFD? (What Would Frida Do?)” and his students constructed an ofrenda (altar) to Kahlo. All of the exhibition text is in both English and Spanish, translated by the language students of Dr. Clare Sullivan.
For additional information, visit the blog designed by Pilar Acevedo at enelespiritudefrida.weebly.com.