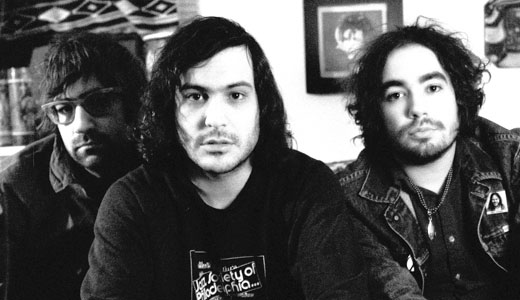 The fuzzed-out guitar psychedelia of Purling Hiss comes drenched in white noise, but it’s full of love. There is a gleeful mayhem in the completely unpredictable but undeniably pop-friendly music — a rare but potent blend. You can feel that lust for life when talking with singer/guitarist Mike Polizze; this is a man who wants to play and enjoys doing so unapologetically. Polizze had an auspicious enough start, making music to his own muse, but was spurred on by Philly underground wizard and longtime friend Kurt Vile, and a collection of infectious tunes.

“Back in around 2007 and ’8, I was recording on my 4-track; I had some various recordings before that. But in this particular time period, I was working on a guitar noise experiment, and I was adding in some white noise to it, sort of a noisy thing,” he says. “And the end result of it was that first album[, which] came out in 2009. I looked up some words and ‘purling’ … means ‘white noise.’ I didn’t know it was going to be a band or anything. In 2010, I got invited on a tour and put together a band.”

Listening to Purling Hiss’ records made since, you can hear a shift not only in the songwriting, but also in the production. Their newest, “Weirdon,” out now on Drag City, has a cleaner tone — a reflection of a band with resources. But Polizze has a laid-back approach to recording.

“I think there are people out there that can be really great at execution; you might be really great at guitar and have a great tone. The other side of the spectrum is, you might have great ideas, but your engineering and sound [are] terrible,” he says. “I care less about execution and how pristine it is. I like idea people. It kind of just seems natural to start in a bedroom and now in the studio. I think my point gets across on the 4-track. I’m thinking about even putting out a tape that’s real low key. You learn things, you challenge yourself and you move on: It’s kind of fun to document along the way and watch it happen. Where I’m at personally, production can be important, but it doesn’t have to be for art to be good.”

That easy vibe informs Purling Hiss’ set as much as their music. Polizze has a simple but effective philosophy, believing that a good show is just “playing passionately, like you mean it, even if there are two people in the audience. From that perspective, you play your songs the best and put it out there.”