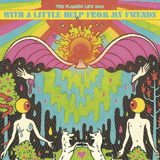 While some of it sounds like Pink Floyd jamming in a garage while getting blacked-out drunk after a peyote binge, The Flaming Lips-led “Sgt. Pepper’s” cover album, “With a Little Help From My Fwends,” has its moments. Some people say this is a Beatles masterpiece and shouldn’t be covered, but I disagree: Really, “Sgt. Pepper’s” was a forward-thinking album that paved the way for a lot of pop-psychedelia whimsy and scatterbrained ambience to come. So, why not? It’s good, not untouchable. Of course, at times, The Flaming Lips overdo it. The Lips, My Morning Jacket, Fever The Ghost and J. Mascis throw the opener into a tornado of weirdness, making the tune bounce from transcendental to frustrating and back in a matter of seconds. Miley Cyrus suppresses her attention hunger and hits this incredibly spacey, ethereal source of power that makes you want her to start a rock band as she absolutely nails the toughest track to re-create: “Lucy in the Sky With Diamonds.” Phantogram’s “She’s Leaving Home” hits the perfect balance between tribute and making it their own, Maynard James Keenan is Maynard James Keenan on the excellent “Being for the Benefit of Mr. Kite!” … but much of the rest of the album struggles.