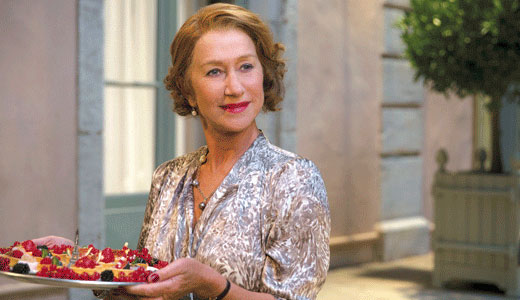 DAWN OF THE PLANET OF THE APES

While the first chapter in this “POTA” reimagining was exceptional, we like this sequel even better. Head ape Caesar (Andy Serkis) and his growing band of simian followers are peacefully ensconced in the mountains outside San Francisco, with most of the human race dead from the simian flu epidemic. Life is good, especially for the little apes, his own son among them. But when desperate men enter the forest to restart a vital electric dam, you just know it is all going to hell. The ending sets things up for a slam-bam winner-take-all in the next movie. Recommended.

Helen Mirren shines as always in this small film about a culture clash between two eateries in the south of France. She runs the snooty Le Saule Pleureur with icy precision, brooking no dissension from her talented staff. And when she learns that an Indian restaurant is moving in close by, she goes completely off the rails, determined to do whatever is necessary to rid her life of this culinary abomination. Producers Steven Spielberg and Oprah Winfrey join forces to tweak the nose of time-honored traditions with help from lovely Charlotte Le Bon, whose auto accident sets everything in motion. Inspired.

We seem to review an awful lot of gay films in this column, and frankly, many of them have little to recommend. But this one has a hook we couldn’t resist: Nicholas Brendon, Buffy’s sidekick Xander from “Buffy the Vampire Slayer,” and more recently, “Criminal Minds,” plays the clueless would-be love interest of overweight, gay Bob (Jonathan Lisecki). Once rejected, Bob decides that radical surgery is the only way he’s going to find happiness. Here’s our philosophy: Happiness can’t be found, only given.

For the uninitiated, “Fagbug” is the name given a certain Volkswagen Beetle owned by Syracuse, New York, artist Erin Davies after it was spray-painted with anti-gay graffiti in 2007. Incensed, she began driving it around town to raise awareness about hate speech. That campaign grew until Volkswagen of America and HD Radio offered sponsorships; she immediately had the car repainted rainbow colors, expanding her vision to include a tour through all 50 states, recording the journey in this doc. Also available, “Fagbug” (2009; $24.99), her less polished original doc on the car’s first year.

A quartet of gay Spanish-language shorts, each representing a different stage in a man’s sexual life. The youngest is a boy of 11, confused over his first crush; the oldest (and best of the bunch) follows an impoverished old man trying to raise money to visit a young male prostitute. His growing obsession leads to a stunning realization about the nature of desire.

A provocative and potentially exploitable topic — is Internet access good or bad for our children? — gets a much-needed examination in this British doc from writer/director Beeban “To Wong Foo Thanks for Everything, Julie Newmar” Kidron. Moving from high-intensity marketing meetings at American firms to their consumer targets — that is, children who have spent most of their lives staring down the barrel of intense media advertising — it’s hard to avoid the conclusion that this generation is only the first in which free will has become a commodity. Don’t sell yours cheaply. Required viewing, especially if you have kids.

A welcome Blu-Ray release of the stage recording of the Stephen Sondheim musical starring Bernadette Peters and Joanna Gleason. It’s an original bit of dark nonsense based on classic Brothers Grimm tales, with elements of “Cinderella,” “Little Red Riding Hood,” “Jack and the Beanstalk,” “Rapunzel,” et al., complete with cursed cows, golden slippers and magic beans galore. Frankly, the photography is terrible, but don’t let that stop you from enjoying this entertaining and nicely priced stocking stuffer.

In a dark world, an orphan joins forces with an ex-cop to avenge her parents’ murder. Seen it before? Not like this you ain’t! With blistering India “The Secret Life of the American Teenager” Eisley as the woman and Samuel L. Jackson as her partner, this thing nicely goes off the rails, perfectly in keeping with its anime roots. And watch for Callan “I Am Number Four” McAuliffe as the guy who helps her find her deadly scarlet-wigged persona. Unredeemable, but who cares?!

This, a part-two “mid-quel” in the popular anime series, fills in many of the gaps between the original “Queen’s Blade” and the recent “QB: Rebellion,” providing much-needed backstory for  the franchise’s many characters. Yet it stands perfectly well on its own, a fine introduction for new viewers. Best of all, this is an OVA, an “original video animation” — the genre term for a straight-to-video product, unbound by Japanese and American censorship — so it is chock-full of “fan service,” that wonderful phrase implying three hours of uninhibited sex, nudity and violence. As God intended.

Brandon Lee, only son of the legendary Bruce Lee, was killed in a stage accident while filming 1993’s “The Crow”, ending a promising film career almost before it began. Now available: this welcome re-release of his only Hong Kong movie, long unavailable on video. It’s a John-Woo-meets-Shakespeare nightmare starring Lee as a hardworking nobody with a beautiful girlfriend (Regina Kent). His best friend, a brutal drug lord, desires her, setting in motion a crime which sends the innocent Lee to prison. But when he gets out eight years later … A must own.

TALES FROM THE CRYPT/VAULT OF HORROR

A pair of perfect Hammer Studios horror anthologies, together for the first time on Blu-Ray. In the first, master director Freddie Francis drops five bewildered souls into a slimy catacomb, the lair of cryptkeeper Sir Ralph Richardson. He narrates how each came to this lowly state – and with a cast that includes Peter Cushing, Ian Hendry, Patrick Magee, and Joan Collins, you can be sure of a devil of a good time. The second was clearly inspired by the first, with Roy Ward “Five Million Years to Earth” Baker directing Terry-Thomas, Tom “Doctor Who” Baker, and Denholm Elliott through five more well-earned downfalls. Two nicely creepy willies-fests for one great price.

Fans of the “Dragon Tatoo” films are crazy over this international-crime detective series from Denmark. Jens Albinus (“Borgen”) is Hallgrim Ørn Hallgrimsson, the inspector who earned his nickname of “The Eagle” through his uncanny ability to spot clues that others overlook. But, unable to see his own personal failings, his personal life is a complete shambles and he can barely hold his team of forensic and technology experts together. Simply extraordinary TV unlike anything offered by lame American broadcasters. Two new 3-disc seasons now available for a giveaway price.

THE INSPECTOR AND THE SEA: SEASONS 1 & 2

Set on the breathtaking Swedish island of Gotland, this series eschews the usual “genius investigator outsmarts criminals” plotline in favor of a sleuth who’s something of a dumbass – and afraid of the water to boot! Okay, we’re being unfair: the German Inspector (Walter Sittler) isn’t stupid, he’s just an average guy trying to do a tough job, piecing together mysteries in a place and culture he doesn’t really understand. Very nicely written, with an excellent supporting cast – including Inger Nilsson, better known as the big screen’s Pippi Longstocking! – plus enough Nordic eye candy to keep things interesting. We liked it.

Writer/Director/Producer Nicole Conn first burst onto the scene with 1992’s groundbreaking “Claire of the Moon”, about a woman facing her sexuality at a cloistered meeting of female writers. Obviously a topic close to her heart, Ms. Conn has gone on to become something of a celebrity in the lesbian romance genre. Four of her best works are captured here, including “Perfect Ending”, “Elena Undone”, the short “Cynara”, and a 2-disc version of “Claire”, making this the perfect giftset for that someone special. Like yourself.