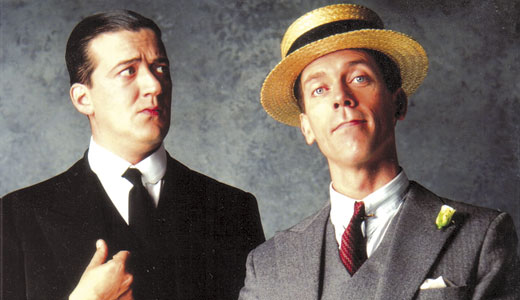 If there was ever the perfect pairing of actors, it has to be in this gut-busting Limey series starring Hugh “House M.D.” Laurie and Stephen “V for Vendetta” Fry from 1990. Laurie plays Bertie Wooster, a brainless, lazy, aristocrat/layabout whose every step drops him deeper into comic misadventure — often with horrible matrimony as his only escape. And Fry is his loyal manservant Jeeves, the only thing standing between Wooster and complete ruin. Their constant banter, a tirade of double-entendres and sneaky jabs, is pee-yourself funny yet underscores their deep friendship. Based on P.G. Wodehouse tales, it all takes place in 1920s England, the ideal setting for these two masters of mayhem to run amok. And you can win a free copy at  videotapeworm.com!

This, the 31st MST3K video collection, is perfect Thanksgiving Day couch- fodder, featuring four never-before-released titles from both the Joel Hodgson and Mike Nelson eras, including “Jungle Goddess” with George “Superman” Reeves, Ralph “Dick Tracy” Byrd and heaping mounds of stock footage. Lassie sniffs “The Painted Hills”; schlock abounds in “The Screaming Skull”; and ‘80s earthworms eat people in “Squirm.” Complete with both brand-new and classic Turkey Day intros, plus the historic “Gumby’s Parents” short that spawned the MSTie holler, “That squares my breasts!” We love these things.

Sixteen bliss-filled episodes from Cartoon Network’s perfectly math-magical series about a human boy and his “brother” Jake, a future-dog who can stretch to any size or shape. Ranging from damned silly to profound and back again (often in the same sentence), these incredibly smart bits of nonsense represent the best that television has to offer. But as good as they are, what really sets this set apart is that it comes with a free kid-sized backpack, just like the one that Finn wears! Mankind’s finest hour.

While we have nothing like it America, Japanese youngsters have long enjoyed dating-simulation games, including the PS2 progenitor of this anime series. It follows Junichi, an average, likeable high-school boy, still smarting from his first breakup, and his friends of both sexes as they meet, develop friendships and experience romantic feelings for each other in a variety of different ways. While some might call this a soap opera, it can be downright silly at times but never goes off the rails. Pristine visuals and innocent, attractive characters yield a series that is infinitely entertaining, even for jaded farts like us.

This Comedy Central guilty pleasure works because it is so insanely, irresistibly, unredeemably stupid. Here’s the idea: (1) Someone tells a completely true historical tale, in their own words, while drunk as a skunk. (2) First-rung, usually uncredited, actors act out the tale in costume on period sets, lip-synching the drunken storyteller’s words. Sound simple? You’d HAVE to be! Some of the most spontaneous, unpredictable guffaws since the days of Uncle Miltie. If this sounds stupid, well, it is! But it is also gloriously funny; something that the corporate shills at CC rarely achieve. A must-own.

This is an anime about a video game, or more accurately a massively multiplayer online role-playing experience called Elder Tale, whose adherents become so obsessed with that they often lose touch with reality. But upon release of the mystical 12th Expansion Pack, reality loses touch with THEM: 30,000 players are transported physically INTO the game where they can fight, breathe and (dunt dunt DUNNN) die! (Temporarily.) Awkward college student Shiroe finds that he kinda likes it there, joining forces with two friends to help everyone live full lives in the strange new land. One of the most immersive and visually beautiful animes we’ve ever seen.

Brenton Thwaites is a young man from an emotionless world of perfect conformity (Middletown), never questioning how or why this strange life came to be. Then he becomes “Receiver of Memory” and is taught a dark lesson by Jeff Bridges (oh, so many quips …), setting him on a desperate journey of escape that will somehow protect those he loves. We guess that this all made sense in its popular YA book form, but it’s still a pleasant, simpleminded escape flick, if you don’t think about it too much. Co-star/Cameos include Meryl Streep, Alexander Skarsgard, Katie Holmes and Taylor Swift, along with winsome eye candy Odeya Rush.

Pierce Brosnan reportedly made this “ex-CIA hitman comes out of retirement” shoot-’em-up on a lark to relive his James Bond days one last time now that he’s reached the creaky age of 61. Former Bond girl Olga Kurylenko co-stars, with Luke “G.I. Joe: Retaliation” Bracey as his protege, out to kill them both.

Daniel Radcliffe seems to go out of his way to escape his Harry Potter past, often taking odd roles in small movies. Here plays a med-school dropout, burnt out on love yet surrounded by people who all seem to have found that special someone. He meets and befriends Zoe Kazan (“Happythankyoumoreplease”), already in a long-term relationship. They become best friends and realize that there is an attraction, but neither wants to change their lives. But “what if” they did?

A Norwegian family adventure flick aimed at pre-teens, mixing Indiana Jones and that country’s Viking heritage. Pål Sverre Hagen – star of the TV series “Buzz Aldrin, hvor ble det av deg i alt mylderet?” (“What Happened To You in All The Confusion?”) plays the requisite archeologist who uncovers a rune-encrusted stone, revealing the burial place of a legendary Viking queen – but evil others want to beat him to his prize. What to do? Why, grab the kids and race to the frozen north, of course! Harmless fun, but with enough jumps to make the wee-ones wet ‘um.

This BBC series is a charmer. Joanna Vanderham, a most virginal and model-lovely creature, plays the innocent young woman making her first foray into the “modern” world, just as the 18th century comes to a close. Based on Emile Zola’s “Au Bonheur des Dames” and its 2005 stage version, “The Department Store”, she revels in the joys of first love, getting to (gasp!) hold hands in private with her widowed boss (Emun Elliott). In the season opener he proposes to her, just as the store is struck with its most threatening challenge. It’s embarrassing how much we enjoy this thing.

TOUCH OF THE LIGHT

Now here’s a movie that is truly different. Blind piano prodigy Yu-Siang Huang plays himself in a bio-drama based on own his life. Born in a squalid Taiwanese village, his incredible musical passion inspires others to pursue their own dreams, regardless of the dangers. But his journey reaches its most difficult point when he arrives at a university and must compete against the nation’s most gifted, sighted students. That’s when he meets lovely Sandrine Pinna, an impoverished dancer. Together they inspire each other to succeed.