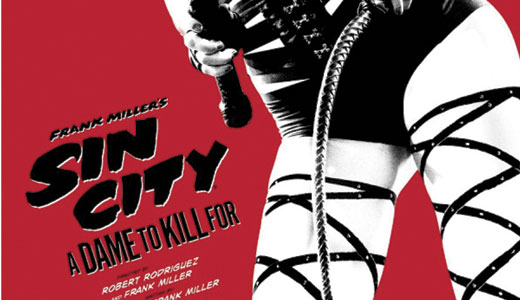 Sin City: A Dame to Kill For

While the original, “21 Jump Street” didn’t plow any new comic ground, it had the great fortune of starring 30-somethings Jonah Hill and Channing Tatum as “teens” undercover at a high school. Here the two return to infiltrate the college drug scene, and we were pleasantly surprised to find a familiar plot — actually it’s the exact same plot as “21,” which the two continually point out for comic effect. This time, Tatum develops a man-crush on a football player, which upsets the partners’ already dicey bromance, while Hill becomes infatuated with art and some comely art majors.

SIN CITY: A DAME TO KILL FOR

To call this a flop at the box office would be cruel, but it certainly didn’t live up to expectations — and exactly why is a mystery. Reuniting directors Robert Rodriguez and Frank Miller, using much of the original cast and those evocative graphic-novel visuals, only the story has changed. Josh Brolin comes onboard as Eva Green’s lover/patsy. Returning greats include Mickey Rourke, Rosario Dawson, Powers Boothe, Jessica Alba and Bruce Willis. Even the always-bankable Joseph Gordon-Levitt didn’t fill seats. But for what it’s worth, we thought this was every bit as entertaining as the original. Check it out.

AS THE LIGHT GOES OUT

This wildly dramatic Hong Kong actioner is a crazy bag of hot buttons, all being pressed at the same time. A heroic band of firefighters is called to battle a nighttime warehouse blaze. On Christmas Eve! Right next to a power plant full of natural gas and lost schoolchildren! And there’s a typhoon coming! Intense character backstorys keep the tension cranked up to 11 while broken personal dramas are played out amid the darkness, heat and smoke. As the danger mounts, the only way any of them are going to survive is with the help of their brothers. Fun stuff.

While not the greatest movie ever made, this entertaining tale of near-future intrigue does one helluva good job exploring mankind’s relationship with technology. In an eco-damaged world of Republican overlords, robots are about all that keeps the human race alive. But when one of them overrides its own programming, investigator Antonio Banderas delves deeply into the cause and finds … We won’t spoil it, but we liked this better than “I, Robot,” if only for the cast, which includes Birgitte Hjort Sorensen (Nordic nudie antagonist of “Borgen”), Melanie Griffith, Dylan McDermott and Robert Forster.

Renato Russo, South America’s answer to Bob Dylan, famously wrote the 1987 song “Faroeste Caboclo” about a man who leaves his hometown for a better life in Brazil’s capital, where he falls in love with a beautiful woman and becomes a drug-dealing outlaw. This is the movie version of that song, set in the early ‘80s with Fabrício Boliveira as the man and model/actress Isis Valverde as the woman. Has a nice “Django Unchained” vibe throughout and terrific music. May be the best movie you never heard of.

I COULDN’T BECOME A HERO, SO I RELUCTANTLY DECIDED TO GET A JOB

Better known as “Yu-Shibu,” this anime series, based on popular Japanese YA novels, follows the travails of Raul, a young man who once dreamed of fighting the Demon Empire. Unfortunately, before he can start his training, the Empire goes belly up, leaving him no choice but to settle into a boring sales job. That’s where he meets huge-breasted Fino, the cute blonde daughter of … the Demon Lord! Hopelessly smitten, he spends most of his time protecting her from their bosses and friends who aren’t prepared for her wild tales of torture and madness in the demon realm. Perfectly captures ever guy’s “learning about girls” phase of life. A hoot.

Chloe Grace Moretz has charmed us since we first saw her foul-mouthed child superhero in “Kick-Ass.” Here she continues to wow as a likeable, carefree teen, full of hope, joy and promise, who finds herself quite literally in a life-or-death decision that will change the lives of everyone she ever loved. Yeah, it’s all a bunch of romantic schmaltz, and manipulative to boot, but Moretz pulls it off effortlessly with help from boyfriend Jamie Blackley, parents Mireille Enos and Joshua Leonard, and especially Stacy Keach as Grandpa. A weepy YA chick flick, to be sure, but a good one.

Warner Bros. takes elements from a half-dozen crappy SyFy movies and shows how to do them right. The little town of Silverton has a very bad day, as horrific storms spawn scores of tornadoes. The fun part, of course, is watching all those idiot TV stormchasers meet gory ends amid howling winds and flying razor-edged debris. But that is just the beginning: A super-duper mega-storm is on its way, guaranteed to leave no living thing standing — even the dedicated, square-jawed, storm-chasing hero. Enjoy.

WHEN COMEDY WENT TO SCHOOL

Jerry Lewis, Sid Caesar and Milton Berle are just a few of the legendary performers from a generation that redefined the very nature of Western comedy and whose effect is still strongly evident today. This doc introduces that generation, the bloody history behind it, and why it may be America’s greatest cultural gift to the world. For us, the best part takes place in upstate New York’s Catskill Mountains (better known as the Borscht Belt because of its many exiled Russian Jews), where so many of these performers “went to school” before moving to New York City, making that the unlikely home of early TV. Entertaining as hell.

Dan Cohen is the founder of the nonprofit group “Music & Memory”, dedicated to the scientifically-accepted fact that music can combat both memory loss and most of the psychological problems associated with it. Unfortunately our nation’s pill-centric health-care system doesn’t keep abreast of such breakthroughs, making it nearly impossible for sufferers to get proper treatment. This doc follows Cohen on his quest to change all that, with help from author Oliver Sacks and musician Bobby “Don’t Worry, Be Happy” McFerrin.

Here’s a treat for cult-film fans: The first ever 4K/Blu-Ray upgrade of a true Christmas stinker from 70’s horro-auteur Lewis Jackson, complete with a big red bagful of bonus goodies. A Santa-obsessed psycho works in a toy factory by day, then puts on his furry red coat to punish the naughty at night. While it was something of a rallying cry for early “war on Christmas” noisemakers, today it is best remembered as the breakout role of star Brandon Maggart, a former Sesame Street regular and dad of singer Fiona Apple. Enjoy.

HOW TO LOOK AT A PAINTING

Right up front: This is the dumbest idea for a TV series we ever heard, following Brit Justin Paton around as he introduces us to some of humanity’s greatest art treasures. And, yes, he then explains how to look at them, or more precisely, he explains what it is about each that makes it so important. In some instances his insights suggest that our artwork may record moments of evolving genius, pinpointing the exact moment when the artist first glimpsed some truth in the paint that no one had ever imagined before. Okay, we’re not explaining this well; you need to watch it for yourself – but be prepared to be blown away as you see the world through his eyes.

IN THE LAND OF THE CANNIBALS

Writer/director Bruno “The Italian Ed Wood” Mattei was the unheralded king of no-budget splatter films until his death in 2007, reveling in kinky sex, grotesque mutilation, Nazis-and-nuns, gratuitous nudity, blood, zombies, madness, sharks, and other assorted nastiness under a series of pseudonyms including Vincent Dawn, Martin Miller, Pierre Le Blanc and Bob Hunter. Our kinda guy! Here he recycles the plot of “Predator” with cannibals instead of aliens, adding big, blonde Cindy Jelic Matic as the prize. She also appears in another Mattei title being released this week, “Mondo Cannibal” (2004), as a telejournalist who mounts an expedition to record man-eating atrocities for a ratings boost. Doesn’t go well.

Readers born after the election of president John Kennedy can’t imagine the effect he had our lives. Before, America was a stiff, stifling, cookie-cutter land of white people, quiet, obedient children, and church on Sunday. His ascension heralded a seismic cultural shift: Music became loud and expressive, black and white children ran free together, teens openly took drugs for the first time while their parents shook their heads publicly, but were secretly filled with pride that they had thrown off the shackles of almighty conformity. This doc is an extremely intimate peek into the life of the first political rock-star, built largely from unseen footage, spiced with visits from his many close friends and admirers. Worth your time.

K2: SIREN OF THE HIMALAYAS

We have trouble understanding how mountain climbing is a “sport”, but we have the same problem with golf, so what do we know? Anyway, this doc lets us tag along with a group of dedicated (and, somehow, amazingly well-funded) Alpinists as they attempt to take K2, the Earth’s second-highest point, on the 100th anniversary of the historic first ascent. Truly hair-raising and edge-of-your-seat thrilling at times as they relate how this path has claimed the lives of one out of every four men who have ever attempted it.

Hallmark Channel movies are always pretty lame, and when they do a Christmas movie it borders on painful. So why are we mentioning this one? Because it so perfectly embodies the struggle to create adult entertainment that is both watchable and inoffensive. Originally titled “Fir Crazy” (love that title!), it was renamed for reasons we can only guess at, and stars smokin’ Sarah Lancaster from “Chuck” as a somewhat jaded woman who, raised on a Christmas Tree farm, is sick to death of both the season and the stifling responsibilities of family. But she reluctantly steps in to save the farm when it is threatened, falling for the charms of Eric “Smallville” Johnson along the way, and learning to appreciate Christmas all over again. As writers we just found this interesting. With Colin Mochrie.

One of the scariest and most original creatures ever to crawl from the slime of Stan Winston’s monster factory is fitted with wings and extra cheese for this lesser sequel. But oh! What a cast! B-movie appetizers include Ami “Mickey’s Kid” Dolenz, Linnea “Return Of The Living Dead” Quigley, Soleil Moon “Punky Brewster” Frye, Roger “Bill’s Bro” Clinton and a raft of soap stars, all of whom get chased around for 90 minutes or less, depending on their fate. Half the fun is trying to remember each face before it gets ripped off. Finally available on a pristine Blu-Ray.

A gay Argentine tale about a twenty-something man who has arranged a night of squishy carnubial bliss with a very sexy and much older gay couple in a long-term committed relationship. As the night progresses he comes to realize that sex is just a necessary stepping stone — or a stumbling block — on the way to spiritual maturity. He wakens the next morning older, wiser, ready to accept the lessons that life may offer. And desperately in need of a shower.