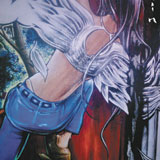 Perhaps Satellite Twin’s greatest achievement is in illustrating just how durable mid-’90s indie can be, which by my estimation remains remarkably listenable. Such can be said for “A Tower in the Right Flood,” the newest EP by Satellite Twin, recently released via the band’s Bandcamp page. That the album was released digitally wasn’t the only indication that the genre has moved into the 21st century, as Satellite Twin put their own stamp on it, making music that somehow straddles 30-something high-school/college nostalgia (or so it does for me) that has evolved into more than the sum of its parts. The vocals are pitch perfect, and every instrument finds its niche without sacrificing anything in terms of performance — which all adds up to an invigorating and dynamic second outing. This is equal measures Fugazi, Unwound and King Crimson, and the end result is transcendent.