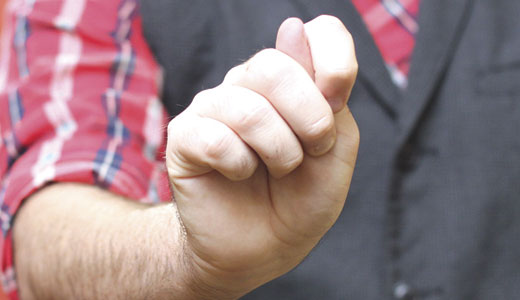 At one point in Nina Raine’s play “Tribes,” an angry family shouting match abruptly dissolves into white noise and pantomime. It’s rare that raw noise conveys an eloquent message, but here it articulates one of the play’s central themes: Sometimes even our most strongly felt words mean nothing more than static.

In terms of story, “Tribes” is about a smart but dysfunctional family whose every conversation takes the form of a verbal duel. The head of the family, Christopher (John Judd), is a brusque literary critic whose speech is arrogant, erudite and obscene. In one breath he might talk semiotics and in the next dismiss some hapless writer as a cunt.

If Christopher’s wit is quick and cruel, he’s not alone. The rest of the family follows his lead. His wife, Beth (Meg Thalken), is in the throes of writing a detective novel that involves a murder and a marriage that (perhaps not coincidentally) is breaking up. Their daughter Ruth (Monique Barbee) is recently smitten with dreams of becoming a professional opera singer — and she’s as obsessed with the lyrics of her arias as with their melodies. Her brother Daniel (Ryan Spahn) is writing a thesis arguing that “ultimately language is worthless” and “words are just a pale photocopy of life.” Ruth and Daniel are constantly at each other, though they agree on one thing: the only kind of love to be had from their parents is abusive love.

A fine play could be made from these four characters. But “Tribes” is more than a fine play. It’s an innovative drama that looks deeply at the very nature of communication.

It does so through two devices: First, there’s a dramatic device. This family includes another brother: Billy (Alex Olson). Billy takes little active part in the family banter — because he was born deaf. Although he’s a supremely gifted lip reader, it’s hard to read a roomful of lips that are simultaneously talking over and around one another.

And when Billy meets a woman named Sylvia (Claire Siebers), the well-established family dynamic starts to disintegrate. Sylvia was born hearing, but both her parents were deaf — so they taught her sign language. Now her own hearing is gradually deteriorating, and she is on the road to deafness. For Billy, meeting Sylvia is transformative. His own family has systematically kept him isolated from the Deaf community and Deaf activism, and they’ve never allowed him to learn to sign. Sylvia helps Billy break down all kinds of barriers. Their first romantic encounter, a multilingual blend of signing and lip-reading, with surtitles to help the audience follow along, is tender and touching. Throughout the play, their use of sign and speech (especially Sylvia’s poignant loss of control over her own voice as her hearing deteriorates) is beautifully executed.

In time, Billy’s new life in the Deaf world awakens a longing for personal independence that threatens to shatter his family (and perhaps his own life, as well via a gratuitous plot development that doesn’t quite ruin the second half of the play).

There is also a brilliantly executed technical device: the use of sound, and the work of sound designer M.L. Dogg. In scene after scene, sound is used to punctuate and comment on the action. Gorgeous orchestral excerpts highlight the emotional power of music. But music is also used to build barriers — headphones and blaring radios create islands of separation. Offstage sounds are purposefully used to emphasize Billy’s sonic isolation and loneliness.

And in an extraordinary scene, Sylvia first debates Billy’s family on the power of signing to express complex thoughts and emotions. Then she sits down at the piano and plays a few poetic bars of music as the family watches in rare silence. All except for Billy, that is. He faces away, unseeing and unhearing.