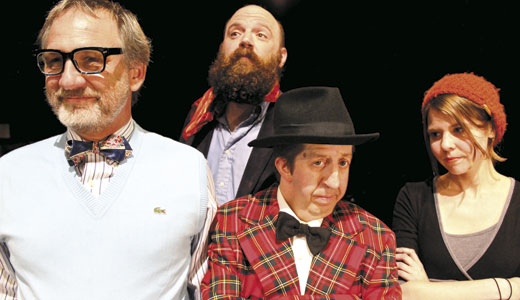 While the Louisville theater scene boasts over a dozen local companies, Slant Culture Theatre Festival is the first and only of its kind to tap into the talent and experiment with its collaborative power. Spanning over the next 11 days, Slant brings together 17 different companies and solo artists, establishing a once nonexistent avenue for local semi-professional theater to collaborate and flourish. As described by festival producer Alison Huff, “We recognized that there now seems to be a cadre of semi-professional theatre in Louisville. While each group has its own core audience, there’s not as much cross-pollination as you would think. But these are theater professionals and masters of their craft who make a living in the field producing exciting, relevant and high-quality theater on a consistent basis.”

Beyond the ensuing interaction among professional groups, Walden Theatre, with its roots in theater education, developed Slant with the goal of producing “new plays by rising writers that feature complex teen characters, in order to challenge young actors to seek inspiration from a new angle — inward.” Overarching themes of self-discovery, experimentation and collaboration resound throughout the 18 productions selected specifically for the festival, whose description — “a laboratory for uncommon works”  —comes through in everything from psychological dramas to poetry slams to magic shows. Huff says this variety largely aids in creating a community throughout such diverse productions that one can “feel throughout the building during the run. … [It] is amazing and undeniable.”

The Slant Culture Theatre Festival serves as an intentional sampling for all the collaboration, experimentation and self-discovery that major Louisville production companies have to offer. Walden Theatre introduces this to Louisville in a familiar way, complete with food trucks, a bar, a launch party and production companies, all coming together over several days in order to make theater an approachable subject for everyone.

‘They’re all a little slanty’

In anticipation of the year’s most far-reaching theater, music and arts event, we chatted with Slant Culture Theatre Festival producer Alison Huff to get the vibe of the experience, the scope of its human involvement and the secret to its long-term benefits to the local arts community.

LEO: What’s the overall vibe of the productions?

Alison Huff: The productions are all over the map, by design. We intentionally choose the companies and the shows involved to offer a little taste of just about everything out there on the Louisville scene. The one through-line is that they’re all a little quirky — or “slanty,” as we like to say. Each show is either something brand new, or something that is old but is done in a fresh, new way. Collectively, it’s a theater experience that you won’t find anywhere else in town.

LEO: Some of the funniest, most appealing pop culture isn’t just a story; it’s a relatable mirror into our own life. I think that mirroring angle is something that anyone can appreciate.

AH: Of course! Theater is all about the human experience, and human connection in particular. What makes going to a play so magical is that you’re exploring complex stories of humanity — not with a rectangular screen and a digital projection, but with other humans: the ones performing, the ones sitting next to you in the audience. … It’s community and shared experience, and when you see a show that has particular relevance to stories in your own life, it can be one of the most powerful experiences you’ll ever have.

LEO: How many people are involved for the full run?

AH: Eighteen theater and storytelling offerings; 20 live, local music acts, plus Over the Rhine from Cincinnati; about 70 performances, all featuring about 200 artists, staff and volunteers. And we’re expecting about 2,500 to 3,000 audience members over the run.

LEO: Is there a single, must-see performance this year? A production that completely encompasses the Slant Culture Theatre Festival goals?

AH: All of it! I suggest you get a festival pass and see as much as you can. … But if you’re going to see just one … I have to encourage you to come see the Walden main stage show, “Jane the Plain.” Our kids do really fantastic work!

AH: This kind of large-scale, cross-sector collaboration is truly rare, especially in Louisville, and most especially in Louisville’s art scene. Instead of operating in silos, the Slant Culture Theatre Festival seeks to build meaningful collaboration, pooling our resources in a way that creates a product bigger than the sum of our parts. And the relationships we build through that process foster additional partnership and collaboration year-round. Yes, we have created a fun, entertaining festival of theater, music, visual art, storytelling, food and more … but more importantly, we’ve created a model for how arts groups can work together to achieve more.