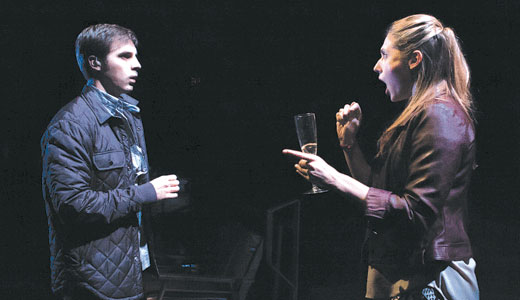 Alex Olson and Claire Siebers in "Tribes"Photo by Bill Brymer

In theater, sound design is an invisible art. Unlike the front-and-center visuals — makeup and costumes, sets and props, lighting and the physicality of the actors themselves — sound design often works, barely noticed, in the dark corners of our consciousness.

Sound design is also the least understood of the theater arts. We know this because last summer, the Tony Awards Administration Committee, which oversees the Tony Awards, decided to eliminate awards for sound design in straight plays and musicals. The rationale, as reported by The New York Times, was that “many Tony voters do not know what sound design is or how to assess it.” In the months since, more than 30,000 people, including luminaries Stephen Sondheim, Cyndi Lauper and Hugh Jackman, have petitioned for the awards’ reinstatement. The Tonys recently announced that the decision is under review.

Meanwhile, Louisville theater-goers can experience a brilliant example of sound design at Actors Theatre, where “Tribes,” Nina Raine’s witty, moving story of two hearing-impaired characters and the people around them, runs through Dec. 7.

This production, directed by Evan Cabnet, is one where sound and silence, music and noise are central to the experience. They’re woven into the fabric of each scene and the seams between, sometimes reinforcing the action, sometimes undermining it with sly ironies, shaping our emotional responses to what’s happening onstage, and always heightening our awareness of the paradoxical ways in which both silence and sound serve to connect and isolate us.

The sound designer for ATL’s “Tribes” is M.L. Dogg, whose long list of theater credits includes a stint as assistant sound designer at ATL in the late ’90s. In a phone interview from New York City, Dogg talked about his work on “Tribes.”

“I’m an instinctual designer,” said Dogg. “I’m not heady or theoretical. I like to spend a lot of time watching the rehearsals, getting a sense of the rhythms of the performers, the flow of the scenes, and the director’s approach.”

These days, it’s typical that freelance technical theater professionals join a production toward the end of rehearsals, work their magic and then move on. Dogg, however, spent two weeks watching “Tribes” rehearsals before the tech work started. By that time, he’d spent untold hours thinking about narrative structure, character development, the playwright’s instructions (sometimes specific, sometimes open-ended), the challenges of the performance space (“Tribes” is staged in the round, in the Bingham Theatre), listening to music and choosing specific recorded performances (the first act is full of glorious sounds), and learning about the experiences and perceptions of the hearing impaired (a matter of personal interest for him, as a family member is now experiencing progressive hearing loss).

In simple terms, “Tribes” is an archetypal story of voyage and return. Hearing-impaired Billy (Alex Olson) meets Sylvia (Claire Siebers). Following her, he forsakes his family and finds a hitherto unknown world. It’s a voyage mapped in music. The world of Billy’s family (and the first half of the play) is dominated by classical music — except for the muffled, bass-heavy siren call of Jason Derulo’s “Bubblegum,” which gives way to “Turn Down for What” (DJ Snake and Lil Jon), sounds that accompany Billy and Sylvia’s tentative first encounter. In the second half, Dogg transports Billy further into his new world, starting gently with a Damien Rice track that blends strings and guitar. Later, it’s a return to opera that heralds Billy’s reconciliation with his family.

But it’s in the detailed textures and split- second timing where Dogg’s work makes its greatest impact. Here are a couple of scenes that highlight the process.

An early offstage argument involves intricately choreographed movement that gives us a palpable, authentic sense of events that we hear, but never see. In another scene, a tumultuous family discussion leads Billy to remove his hearing aid — and the audience hears a burst of white noise. But it’s not simple white noise; rather, it’s eight seconds of calculated sound, based on Dogg’s research and interviews he conducted with people in the Deaf community.

“It was a challenge,” said Dogg. “And it was a scary moment. Any time you have a cue in a script, you want to express it as well as you can. My challenge was really to find an authentic way to do something that expressed what the director, the playwright and I wanted, and somehow create something that would jive with everyone’s expectations. Everyone is going to have a notion of what it’s like to be deaf, and some people are going to be more knowledgeable than others. As hearing people, we don’t really know what it’s like to be deaf. But we can talk to people who have experienced hearing loss. I was trying to capture that, while also using the playwright’s description of an ‘underwater buzz.’”

In the end, Dogg used some 25 layers of sound. “Touching a microphone has a very distinct sound,” said Dogg. “So as [Billy] took off the hearing aid, I wanted those initial sounds. It’s an electronic device, so I wanted to play with the ‘electronicness’ by adding electronic beats and noise. Then there’s the eight-second drone of the underwater [buzz]. For that I put together a bunch of different elements; some were reversed, some were slowed down, some from underwater sound effects tapes. Then, because the scene comes out of that deaf sound into more action, I had to build a layer of sound with a cue that would bring them back.”