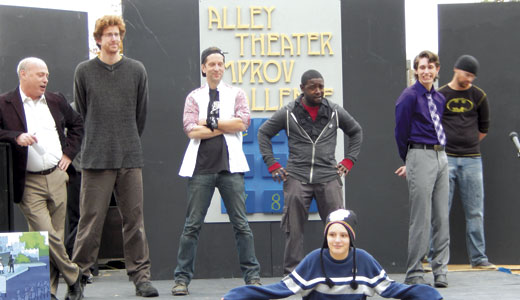 Last Saturday, on a bright, chilly November afternoon, The Alley Theater set up business at the Louisville Zoo.

When I asked for directions, a zoo employee told me to walk past the giraffes, in the general direction of the elephants, and turn right when I happened upon a herd of long-horned addax antelopes.

There I found a well-worn TARC bus, its paint faded and streaked with rust after who knows how many miles traveling the city’s streets. One side of the bus had been carved up to create an opening, from which jutted a black-draped stage adorned with a couple of loudspeakers controlled by a soundboard located off to the side.

I checked the bus’ header sign, because you never know when you might actually run across a streetcar named Desire. But alas, it was blank.

This bus does have a name, though: Salley. And it’s the first of a planned three-bus fleet that over the next year will deliver portable pop-up entertainment at schools, festivals and community events throughout the metro region.

These salvaged buses — purchased from TARC for the princely sum of three for a dollar — are The Alley Theater’s newest tools for demolishing the barrier that separates stage from audience. The company has long had a strong commitment to bringing theater to the entire community, says founder and producing director Scott Davis. The buses, which constitute The Alley Theater Arts Caravan, will enable the company and partner organizations to deliver theater to audiences throughout the area — including neighborhoods that have historically been underserved by arts and culture organizations.

Based on Saturday’s delightful and wide-ranging preview performances, these buses might be just the right tools for the job.

Most of the program, which lasted the entire afternoon, was lighthearted. A staged episode of “Candy Matson,” a radio serial from the late ‘40s and early ‘50s, was a droll parody of classic Raymond Chandler-style detective noir that involved a sinister communist plot to steal plans not only for the A-bomb and the H-bomb but also for other alphabet bombs as well. The heroine (played by JoAnne Sweeney) and her over-the-top foils (Spencer Korcz, Sterling Pratt and Daniel Smith) offered plenty of fast-paced patter — and plenty of visual shtick as well.

“Cliffnotes of Insanity: ‘The Princess Bride’ in 30 Minutes or Less,” one of several short comic pieces the theater keeps in repertory, was a quintessential example of The Alley Theater’s distinctive mix of scripted and improvised theater. The performance began with a call for audience members to audition for the villainous role of Prince Humperdinck. Then came a perilous sea crossing (in a boat represented by a dangled blanket), pirate ships, plenty of swordsmanship (using “Star Wars” light sabers), and plenty of quick-witted verbal and physical comedy from the regular troupe members (and the audience volunteer).

While Alley’s contributions focused on comedy, a partner company, Teatro Tercera Llamada, brought a more serious tone with its production, “Las Pantomimas: Historias de Emigrados (Stories of Emigrants).” The company, which focuses on Spanish-language theater, performed a suite of pantomimes about the immigrant experience.

In an interview, director Jomaris DeJesus said that although pantomime is a fringe art form that some view as in danger of dying away, it’s also a powerful storytelling medium that transcends language and cultural barriers.

It was certainly so on Saturday. The pulsing beat and English-language lyrics of Charlie Winston’s “In Your Hands” served as the musical backdrop for one segment that vividly captured the absurdities of the bureaucratic nightmares that ensnare even legal immigrants to the United States. But many immigrants face nightmares that are far more chilling. And even on a crisp sunny afternoon, the company’s depictions of the tragic hazards of a perilous ocean crossing and the clinically brutal nature of contemporary human trafficking cast a dark shadow over the afternoon.

In the end, though, the company ended on a bright message of hope and dreams over the strains of Diego Torres’ international hit “Color Esperanza.” It was an apt message on a day that saw the culmination of an idea that Davis says he first imagined nearly 20 years ago.

And there’s more to come. Over the winter, The Alley Theater plans to complete the outfitting of all three buses with a view toward building relationships with area schools, festivals and partner organizations in the arts.

By spring, Salley and her partner buses may be rolling into your neighborhood.

In the meantime, if you want to see what The Alley Theater does in a more conventional setting, the company premieres its production of Dario Fo’s “The Accidental Death of an Anarchist” this Thursday.

In the early ‘80s, when the play saw its first U.S. production, the U.S. government barred Fo from entering the country because of his anarchist and communist political views. After years of protests and multiple applications, he was finally granted entrance in 1984, when the State Department described him as “an alien of distinguished merit and ability.”

The play, a satirical farce based on the unexplained death of an Italian anarchist railroad worker, runs November 13 – 22 at The Alley Theater, 633 W. Main St. For information, connect to thealleytheater.org or call 713-6178.