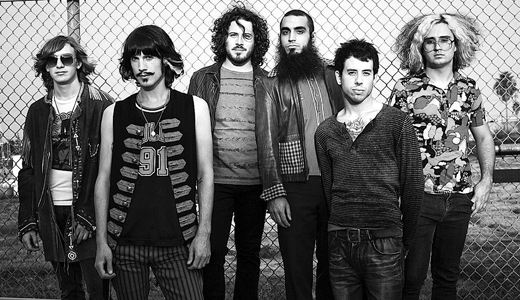 For the past decade, Foxy Shazam has been the little band that could. Theirs was a special kind of energy, a classic kind of arena-rock vibe that bristles with energy and big moments — the sort where you might expect someone in the band to jump kick at any moment, like a rowdy David Lee Roth blitzed on caffeine. But that all came to an end this last week. Just before the band was set to blow the doors off The Mercury Ballroom, they announced their hiatus courtesy of an open letter, where they explained, “After more than 10 years of our lives completely revolving around Foxy Shazam, it is time to disband for an unknown amount of time.”

That the band released “GONZO,” their latest and greatest, free of cost on the Internet, serves only to exemplify their dedication to their fan base. This model, made famous by acts like Radiohead and Nine Inch Nails, is made possible only through the rather costly diligence of the band — an earnestness that ultimately cost them. Per their open letter, “Performing more than two thousand shows together around the world has been life changing, but also has kept us from spending time with our families and pursuing our own passions and ways to grow individually as artists.”

This is the life of a musician in 2014, where touring, not album sales, is the biggest means to an end. And this is the cost of every free record we get — a price ultimately paid by the artist in the long run. Still, the free model is inarguably a forward-thinking approach that accounts for the diminishing returns of a post-Internet entertainment economy.

Before Foxy Shazam announced they would be putting everything on hold, LEO caught up with bassist and Louisville native Daisy Caplan. Speaking of the “GONZO” release, he said, “We released it for free on the Internets, because it was the easiest way to get worldwide distribution with as little outside interference as possible. Physical copies on vinyl are available only directly through us.”

Foxy Shazam definitely worked hard at shaping their craft and being the best entertainers they could. But the stress of constant touring takes a toll. During LEO’s interview with Caplan before the breakup, he alluded to the hardships of constantly being on the road: “I think the absolute weirdest thing for long-term touring (like, almost a decade of being gone 8 – 10 months a year) is that weird vampiric feeling, where you’ve been gone for a few seasons or a year and your friends gained weight or grew their hair out or died or had a kid or got older or whatever, just goes exponential. And it just gets weirder and weirder until people you love aren’t relatable and it’s kinda freaky, because you don’t change with them — you see their changes all at once, once a year or once every couple of years. On a molecular level, people aren’t even the same after seven years. They’re totally different people. It gets hard to maintain friendships, and it stays that way. Since that’s literally everyone you know that you’re not in a band with, it becomes this freaky and constant reminder of mortality that’s both sobering and isolating.”

Caplan added, “The rest of it — all the amp-carrying, band-fighting and van-sleeping — is not really hard compared to anything that’s actually hard, like construction work or warfare or famine, so it’s not worth complaining about. That one thing weirds me out pretty bad, though.”

On the other hand, according to Caplan, recording was a bit easier, even though it was always different. In terms of songwriting, a process was never set in stone, but that helped maintain a better creative flow for the band. Caplan said, “We have composed and do compose in a number of different ways — some things start out with music, some start with vocals. Some things are an equal collaboration, some things are initiated and/or spearheaded by one or two people at a time. One thing I’ve learned going through the publishing wringer, where agents try to get bands to argue over what the most important part of the song is and who wrote it for meager percentages [is,] just as meaning is created by a consensus, I feel like even if someone in the band isn’t necessarily composing music or lyrics, there’s other ways to contribute to a song. Everyone in the band always has their thumbprints equally on the feel and vibe of the song, which are just as important as a chord change. People always contribute their own parts on their own instruments. Sometimes the best way to contribute to a song is to not contribute, to get out of the way of someone else’s good idea.”

Caplan went on to clarify, “I will say that, in my opinion, the material I personally think of as our best — ‘Oh Lord,’ ‘Welcome to the Church Of Rock And Roll,’ ‘Don’t Give In,’ ‘Red Cape Diver’ — was the most collaborative songwriting-wise, and came together quickly with everyone working together at once.” After all that, Caplan still remains humble. When asked what advice he might have for aspiring musicians looking for any modicum of success, he offered, “I think the only real marker of success is if you’re still plugging along and you’re still happy doing it. So basically, I’d tell someone to figure out what they want to do and then do what’s necessary to get there. I don’t feel like that’s that different of a place than where I was at 10 years ago, really. I just had dumber, louder opinions because I thought I knew more than I actually did, because that’s what you do when you’re a kid. Now I know for a fact that I have a very, very tiny amount of all the relevant information in the world, so I should keep my mouth shut and my ears open. Nobody knows you’re an idiot until you open your mouth.”

While this is the end for now, Foxy Shazam hopes to ride again someday. Documented in their open letter was a ray of hope. They wrote, “We truly believe there is a future for Foxy Shazam that our best art is yet to come. We don’t know how long this will take, but we plan on someday returning more powerful than ever.”

Ultimately though, when LEO asked for a post-breakup comment, Caplan had this to say in the short term: “I’m personally super bummed that our disbandment coincided with having to cancel our Louisville show. I lived in Louisville for 20 years, and most people attending would be old, dear friends. Unfortunately, things often happen quickly in a way that can’t be helped. Personal issues came to a head in a way that made finishing out the year properly impossible, and we chose, as a group, to put on the brakes rather than continu[e] in a half-assed or diminished fashion. I don’t feel like that’s something to apologize for, but I am genuinely sad to miss a show in my hometown. Extra-special shoutout to everyone who asked to be on the guest list and everyone who bought tickets or thought about buying tickets on the website Groupon.”