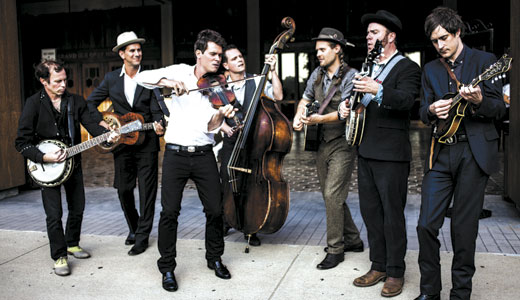 Old Crow Medicine Show has survived as a band for more than 15 years. From busking on street corners in Nashville to playing major stages like the Grand Ole Opry, their career has gone through its share of metamorphoses. Ahead of their Friday, Nov. 14 show at the Louisville Palace, founder Ketch Secor graciously shared some of his thoughts on politics, the band and the connectivity of humanity to music.

“I’ve been watching the debate between Mitch McConnell and Ms. [Alison] Grimes. I don’t think Kentucky is on a new plan or path,” he told LEO prior to Election Day. “I think it’s going to take a lot longer for Kentucky. I play in Kentucky and I know Kentucky pretty well. It’s like voting against your old grandpa because he’s a bigot. ‘Oh, God bless old Grandpa,’” he teases, cheekily. True to Secor’s analysis, “old Grandpa” held onto his Senate seat.

When asked about the band’s street musician past, he talked about the excitement they found playing the corners. “We came to Nashville on a bus from Bowling Green,” he said. “We made 300 bucks. I’d never been in a place where I could make that kind of bread on a corner. The curb was a place that always felt familiar. The instruments lend themselves to outdoor performance, and the canon of song lends itself well to the hucksterism of busking — the way that you call in your audience and convince everyone that they have a ticket to your show and need to pay for it.”

Secor lamented the demise of the lucrative street music scene since their days on the corner. “I don’t think Nashville is the same town for buskers,” he said. “I don’t actually encourage people to busk in downtown Nashville anymore. The zenith has come and gone. The real tell-tale sign — for me — was when George Gruhn left Broadway with his vintage banjos, fiddles and guitars, and moved to the suburbs. There’s a lot of hands open on Broadway and not a lot of dollar bills to go around.”

In their journey to bluegrass, the band followed what Secor calls “the Bob Dylan breadcrumb trail.”

“Every Bob Dylan album is like a signpost to the next Dylan album,” he said. “From that, I was listening to Lead Belly, Woody Guthrie, The Carter Family and a great Kentuckian, Bradley Kincaid. For as hip as Louisville is, I hope that it’s going to get so hip that it rediscovers Bradley Kincaid.”

At times sounding more like an anthropology professor than a musician in one of America’s leading bluegrass/country bands, Secor tends to consider the subtext when speaking about the lineage of his chosen music.

“It’s good-timey music most of all,” he said. “There’s a surface message to jump up and clog or get a buzz on and put your arm around the gal you came with — or the gal you didn’t. That’s the broadest appeal. As someone who’s interested in ethnomusicology, there is a deeper connection that you may not be aware of­. At that concert, by putting your arm around that girl you came with or didn’t come with, and with a little libation in you, you’re performing the same act that your great-great-great-grandfather performed. You’re connected to an earlier version of yourself and to all of humanity. Going to see a fiddle played is something that’s been happening in our country for about 400 years but in our species for 40,000.”

Much like the connection to our history through music, Kentuckians have a deep relationship with the military and the state’s two bases. The track “Dearly Departed Friend” on the band’s latest release, “Remedy,” talks about the difficulties soldiers have transitioning back into the culture at home after so many tours of duty. Secor feels an obligation to our military personnel and expresses respect for their service.

“I know that folks who come to our shows have come home from Afghanistan and Iraq and that they are at our concerts because they heard our music while they were in those places and it made them feel closer to Kentucky,” he said. “It’s one of the parts of our gigs that I’m most proud of and most interested in exploring. Because I think they are the hardest-working people in America and that country music is supposed to be this distillation of the hardest-working people in America’s hopes and fears and loves. I think there is a particular responsibility that someone who plays on the Grand Ole Opry has to somebody who serves on a troop ship — whether headed away or headed home, or living on an Air Force base [and] bringing up three kids while their partner is away. We just try to bring comfort and distraction and to commiserate and ally ourselves with the men and women who serve our country because it feels right to do it. It sets a good example for others.”