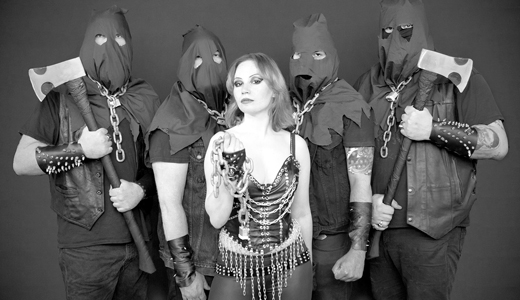 When you hear a piece by Jean Sibelius, it sounds like Sibelius — which audiences will happily discover when guest soloist Elmar Oliveira performs Sibelius’ stark and stirring “Violin Concerto in D” in concert with the Louisville Orchestra. Music Director Emeritus Jorge Mester, who, throughout his career, has enjoyed a reputation for excellent collaborations with solo artists, takes the baton with his former orchestra. Mester has chosen Sibelius’ “Finlandia” to lead off the programs, which also include Felix Mendelssohn’s “Symphony No. 3.” That picturesque symphony is nicknamed “Scottish,” but again, listeners will have no problem finding the German composer Mendelssohn sounding like … Mendelssohn! —Bill Doolittle

With a breezy, slacker vibe that’s infused with just enough roots influence to keep them out of indie’s growing cliches, Athens, Georgia’s Futurebirds fall somewhere in between Southern rock and that dreamy Brooklyn sound that’s been ubiquitous over the last five years. The middle ground gives them a certain amount of charm, versatility and unpredictability. But, it’s not necessarily what makes them a good band. That falls more on the effortlessness of the entire sound. They don’t seem to ever try to be something they aren’t. Not every band has to reinvent the wheel — and some, like Futurebirds, are all the better for not trying to. —Scott Recker

Really, the only adequate word here is legendary, because Loretta Lynn’s contributions to country music — and just music in general — are incalculable. She pushed countless boundaries with her fearless attitude and really didn’t care whom she upset along the way. Some radio stations refused to play her in the ‘70s because she sang about things like birth control — but she still ruled the charts. She did things on her own terms and fought the status quo — something more musicians have been given credit for than actually did. And her latest album, 2004’s “Van Lear Rose” — produced by Jack White — proved that, decades later, she’s still the same Loretta. —Scott Recker

In the world of modern metal music, few have had as wide-ranging an influence as Carcass, a band who helped create and shape three distinct types of metal: grindcore, death metal and melodic death metal. A rare claim, and back in their heyday in the early ‘90s, the group made their way onto Warner Bros. Records, although they struggled with taking a stripped-down approach, soon breaking up. After a lengthy, decade-plus separation, the band started touring again, which eventually led to last year’s comeback album, “Surgical Steel.” Joining them onstage is fellow legendary status act Obituary, as well as the morbidly obsessed filth-mongers in Exhumed, with explosive support by grind assassins Noisem. The last time Carcass played Louisville was in 2008, so if you miss them this time, you might be out of luck forever. —Austin Webber

Eve Theatre Company is opening its third (expanded) season with “The Oldest Profession,” which it’s billing as “‘Sex in the City’ in Spanx.” With a phrase like that, I could probably just stop writing now … but I’ll go ahead and fill you in on some details: Set in the Reagan ‘80s, the play features Michelle Chalmers, Mary Ann Johnson, Gilmer McCormick, Susan McNeese Lynch and Diane Stretz-Thrumond as practitioners who have just about aged out of the oldest profession. In addition to the many laughs that emerge from the plot setup (aching joints, diminishing johns) is a beautiful New Orleans-style bluesy musical score. —Laura Snyder

While viewing this exhibition, I thought of Margaret Mead’s quote, “Never doubt that a small group of thoughtful, committed citizens can change the world; indeed, it’s the only thing that ever has.” The committed citizens of this story are civil rights activists Anne and Carl Braden, who helped an African-American family move to Shively in 1954. The photographs and documentation take viewers back to the time when that integration deed led to the bombing of Andrew and Charlotte Wade’s house and the Bradens’ trial for “plotting a communist takeover of Kentucky.” A related program, “From Freedom Summer to Ferguson: Why We Need a New Culture of Belonging,” will take place November 11 at U of L’s Belknap Playhouse, 1911 S. Third St. —Jo Anne Triplett

Local occult heavy metallers Savage Master bring their national tour home for “Metal Mondays” at the Highlands Tap Room. The national tour promotes their debut studio album, “Mask of the Devil,” which, appropriately, was released this Halloween. The album art was designed by famous French heavy metal artist Chris Moyen, who has created covers for Slayer, among others. Leather-clad Stacey “Savage” Peak is an electrifying lead vocalist with great power and range. Her voice is a perfect complement to guitarist Adam Neal’s lashing style. Savage Master is passionate about the metal genre, and you can feel it in your bones as soon as they hit the first chord. The leather and masks are a nice gimmick, but these savages have the chops to back it up with talent and skills. —J. Cobb

Kim Huber is an artistic recycler in this new exhibition of old stuff. She took various objects collected over the years, including leftover fragments from her days as a textile artist and paper she bought in Asia but never got around to using, and created new mixed-media art. The title of the show, “Collected Materials + Familiar Things,” says it all. “I spent the summer [of 1981] studying in Japan for six weeks through the Parsons School of Design,” she states. “I’ve always liked Japanese textiles. I appreciate the care and intensity they put into design, especially with the tradition of the kimono. A lot of that has stayed with me.”  The show will be on display during the November 7 First Friday Trolley Hop from 5 to 9 p.m. —Jo Anne Triplett

Sculptor Ben Bridwell explains that his “background in metal fabrication and welding provided the framework from which my art has emerged.” LOVE IT! Art can sometimes smack an unsuspecting, thought-I-wasn’t-the-creative-type person into thinking with the right side of the brain. I get giddy when someone tells me they thought they didn’t like art. So Bridwell came to it through the back door, becoming a self-taught artist who ended up winning some awards along the way. His company, Millennium Steel Werks in Pewee Valley, specializes in stainless steel and aluminum wall art, furniture and flowers. Regarding his highly colored metal flowers, he says he started doing those because “I have always found some sadness in the fact that their overwhelming beauty [lasts] for such a short time. So I wanted to create a flower that is everlasting.”  —Jo Anne Triplett

“Tribes” promises to be one of those delightfully meta plays where everything is about something else, and all along the play is commenting on the very act of communication. On one level, it’s about competing ideologies in the deaf community: the value of lip reading (mainstreaming) versus the value of signing (preserving a distinctly deaf culture). When Billy — who was born deaf and grew up reading lips — meets Sylvia — who is hearing impaired and grew up signing — he has to come to terms with identity issues, cultural differences and philosophical questions that are universal in their import. Critically acclaimed, “Tribes” is praised for being funny, smart and beautiful as it asks its audience to consider the power of language to create the world around us. —Laura Snyder