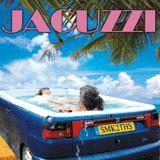 There is an undeniable ‘80s veneer that envelops everything with “Smoke To This,” a retrospective collection of tracks from Louisville electro-indie act Jacuzzi. That there are a total of 28 tracks here makes it difficult to identify any one sound, although there is a relatively consistent theme throughout the entirely instrumental album that is kind of like a particularly daunting hangover after a night of excess. The frequent presence of electronic drums and synth, combined with the pronounced lack of vocals, makes this the perfect soundtrack to a film that never happened. While several of the tracks are whimsical, there is a sadness that runs throughout the entire affair, imbuing the compilation with a mournful quality that balances comparatively celebratory aspects with a lighter, more sobering tone — perhaps a bit remorseful, like an afterparty held inside a video game.