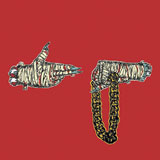 If there is anything that Run The Jewels seems to specifically stand by, it’s a dedication to making unapologetically hard-as-fuck rap music. I’m drawing a distinction here between hip-hop and rap — each has its own social valence, like the graphic novel to the comic: one elevated over the other. But Run The Jewels doesn’t give a shit about any of that, preferring instead to play with rap tropes and themes of all varieties. And they do it so capably that it’s like a master class in beats and rhymes. Rapper/producer El-P provides those beats, still vibrantly as ever, and half of the rhymes, partnered up with Killer Mike again for a seriously right-eous album. Just like its predecessor, RTJ2 is full of bangers and demands full-volume replays.