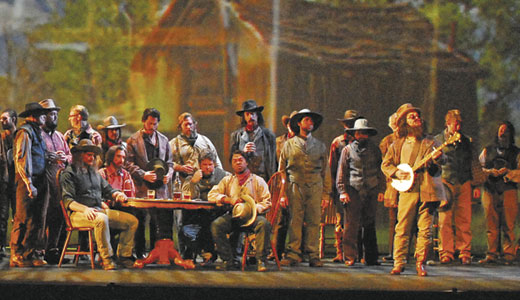 The allure of the American West reached all around the world, and Italian composer Giacomo Puccini was as fascinated as anyone with tales of cowboys and Indians and gunslingers and stalwart lawmen. In fact, when Puccini traveled to New York in 1907 for the Metropolitan Opera premiere of his opera “Madame Butterfly,” he also attended a play called “The Girl of the Golden West,” by David Belasco, and decided that very drama was just what he was looking for. When Puccini filled the play’s canvas with music, the opera “The Girl of the Golden West” was born.

Alas, Puccini’s new opera soon faded. Some say the problem with “The Girl of the Golden West” is that it was just too big to fit onto a theater stage at the time. One understands that the picturesque qualities of the West that make it so wonderful for movies — the majesty of its mountains, the height of its blue skies and the ruggedness of its characters — may be more naturally suited to film than live theater.

The solution, says director Mark Hoomes, who will stage Kentucky Opera’s version of “The Girl of the Golden West” this Friday and Sunday at the Brown Theater, is to bring cinema to the stage.

“I was thinking, if we were doing a movie of this, it would start with a helicopter tracking shot through the Grand Canyon,” says Hoomes. “You have this ‘dah, da-de-dum’ melody and the canyon walls are spinning by. I thought that would be a great opening for a movie. Maybe start the shot in modern times, with the walls a blur, and when it lands we’re back in the Wild West. That was our jumping-off point.”

Talking with a live audience at Kentucky Opera’s “Lunch & Listen” program at WUOL Classical FM, Hoomes says he and designer Barry Steele were thinking cinematically when they pioneered the unique staging of “The Girl” with Nashville Opera in 2012, using video to create dramatic indoor and outdoor vistas for a backdrop.

“What you’ll see when you come to see it is, we have a good bit of scenery onstage, mostly a few scenic pieces and a lot of furniture, like that fantastic bar of the saloon, which I’d love to have in my house … if my house [were] big enough! But the primary scenic element is a projection screen on which we have very high-definition video. So when there’s a snowstorm in the High Sierras in Act 2, this is all video. Very intense video. It’s almost like we did a movie and put the opera in the middle of it.”

The video scenery is generally stationary, but Hoomes is soon lifting off in his helicopter again. “There’s one section in Act 2, when [the opera’s female lead character] Minnie sings about how she loves living in the mountains, and how she rides her horse in the mountains. That’s where I can get my tracking shot, the sky at night, with mountains and stars, into this helicopter shot going over a river in Montana at night with the sun coming up — and it is just beautiful.

Michelle Johnson takes the lead role of Minnie, the good-hearted and street-smart owner of the Polka Saloon. Jonathan Burton sings Dick Johnson, who is Minnie’s lover — and a man with a secret. Franco Pomponi is Jack Rance, a law-and-order sheriff with a romantic yen of his own for Minnie. Plus there’s a Wells Fargo agent looking for outlaws who have held up the stage, a friendly bartender, and a good-sized gang of thirsty miners.