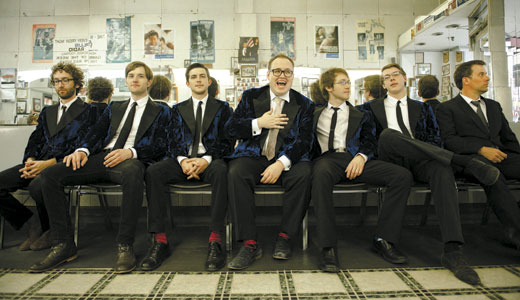 Paul Janeway showed signs early in life that he might be a born performer. “My mom was telling a story, and I don’t remember this, but she said when I was about 4 years old, I’d line up my stuffed animals, get on the bed and I would preach to them,” Janeway recalls during a recent phone interview. “She said she always knew I’d do something like that.”

What neither Janeway nor his mother saw was that this inclination toward performing would lead him to a career in music. In fact, Janeway didn’t start thinking about a music career until about two years ago.

That’s when a bandmate from a former group, bassist Jesse Phillips, contacted Janeway, saying he had gotten some free time in a studio and invited him to come over for the day. The idea was to try to finish writing and record a song they had started on during their time in the previous band, which specialized in Led Zeppelin covers. They actually thought it would be their last hurrah with music and after that, they would go on with their regular lives.

That song was called “Broken Bones & Pocket Change,” and when recording was finished, Janeway knew his life path had just taken a surprising turn.

“I think we had flirted with [finishing] it in our previous band,” Janeway said of the song. “But we just didn’t have the band to do it. When we did that song, yeah, we just knew when we did that, it was like this could be something. So now it’s turned into whatever this is.”

“This” is called St. Paul & The Broken Bones, the soul-infused band that Janeway and Phillips started immediately after finishing “Broken Bones & Pocket Change.”

It’s been only about two years since then, and St. Paul & The Broken Bones are now looking at a very promising future. The band’s full-length debut album, “Half the City,” is one of the year’s best albums. The group has been touring pretty much nonstop, steadily gaining fans as reviews of the “Half the City” and word of the band’s spirited live shows gets around.

Janeway grew up on a steady diet of gospel in the small Alabama town of Chelsea, but later discovered the classic soul music of artists like Otis Redding, O.V. Wright and others. He got interested enough in music as a teen to learn guitar and start flirting with songwriting.

He didn’t see music as a career option, though, and was nearing a degree in accounting when he got together with Phillips to finish writing and record “Broken Bones & Pocket Change.”

Things progressed quickly from there. Janeway and Phillips continued writing, finishing enough songs for a four-song EP, which was released in December 2012. A soul-rooted sound emerged naturally as the first few songs were written.

“Obviously, I sing the way I do,” said Janeway, whose potent voice can range from an Al Green-ish croon to the gritty tones of Wilson Pickett. “I’m obviously a huge fan of soul music, and I think everybody — I mean, who’s not a fan of soul music? But it happened very organically, and I think when I said hey, I want a band with horns, I think that really kind of clinched, OK, that’s what this is.”

The group found early allies in John Paul White, who signed the band to his startup label, Single Lock Records, and Ben Tanner, keyboardist with the Alabama Shakes, who signed on to produce the album that became “Half the City.”

The only drawback in choosing Tanner was his busy touring schedule with the Alabama Shakes. It left him only two short windows of time when he was available to produce the album — in January 2013 or sometime in the spring. The band planned to release the album in June 2013, which meant the band had to write eight of the 12 songs on “Half the City” between Thanksgiving and Christmas 2012 in order to be ready to record in January. Ironically, the release of “Half The City” ended up being pushed back until this past February.

Despite the severe time crunch, the group made an album that will make St. Paul & The Broken Bones a leading contender for 2014’s best new band.

There are plenty of highlights on “Half the City.” “I’m Torn Up” and “Let It Be So” are terrific ballads. “Don’t Mean a Thing” brings a jazzy dimension to the album with its swirling horn lines. “That Glow” shines with its taut and darkly hued melody. “Sugar Dyed,” meanwhile, is catchy and fun. The album’s centerpiece, though, is “Broken Bones & Pocket Change,” a slow-burning track that builds from a tender start to a stirring climax.

Janeway said he hopes the band never has to create an album on such a short deadline again, but he’s pleased with how “Half the City” came out.

“It’s so weird, doing that in a month, and I mean granted, I think it all worked out,” he said. “I think we’re all really happy with the result. But it was kind of like making music with your hair on fire. It was just crazy doing it that way.”