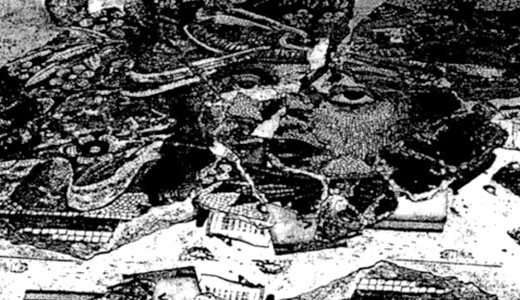 Perhaps Louisville’s best-kept secret, Sapat has a long and storied musical history that charts a wide course, from psychedelia to world music to indie-prog, all in a context that makes perfect sense. In that spirit, the band is releasing “A Posthuman Guide to the Advent Calendar Origins of the Peep Show” on the label Sophomore Lounge this week. The lineup for Sapat, a nebulous collection of like-minded friends, has had its series of ups and downs, of tragedies and victories. We sat down with guitarist Kris Abplanalp to discuss their history, art and improv.

LEO: Tell us about Sapat. How did it start?

Kris Abplanalp: My angle into Sapat’s inception — 15 years ago — was fueled by both a voracious obsession with records, books and movies, and the breaking of a hermetic seal of introversion that had enveloped most of my early adult and teenage life. The small town I grew up in didn’t even have a bookshop. The guy who ran the one record store ended up working in the music section of Wal-Mart, after they put him out of business. Culture was a means both to escape the world, and attempt an understanding of it. Aligning my passions with small-town surroundings seemed untenable. For better or worse, spending one’s formative years as an outsider fostered a robust intrinsic motivation, and a strong suspicion of nearly all forms of extrinsic motivation. Although I knew the difference between being alone and lonely, eventually the abyss started staring back, so I stepped out of the woodwork and surveyed the psycho-geography of Louisville.

LEO: I understand that the band started as an improv collective, and has evolved to have structured songs and a stable lineup.

KA: Well over 100 people have played in Sapat. Most shows consist of at least 10 people onstage. Phase one was comprised of weekly meetings in the Dionysian living room where the salon met the saloon. Phase two involved playing an absurd number of shows almost weekly. Perhaps we are at phase 60 now? I lost count. Whether playing a pop song or a dissonant food fight, the music is always visceral and vulnerable. At its best, it is a group of individuals conjuring a sonic mirror up to a language beyond language they could not have created on their own.

LEO: Is there a value in an objective meaning in art?

KA: Art appears to be valueless in our our late-capitalist society, yet surely it is priceless if you are interested in being human.

LEO: With such a revolving lineup, what makes a band a band? What’s in a name?

KA: Brains are plastic. Identity is not static. Heidegger: We are not born with “fixed essences.” Foucault: Identity is a “shifting discourse.” Rimbaud: “I am the other”. Bob Dylan and the Sun City Girls knew how to wear a mask. Some people write the same book or sing the same song over and over again. Others don’t. That said, we’ve released more LPs under other names than our own!