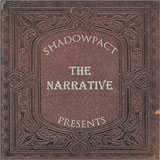 There is a certain early-’90s quality to the production and raps on “The Narrative,” the debut album by Louisville hip-hop duo Shadowpact, and this is a good thing. The beats, courtesy of Artemis the Archer, are a little gritty, with plenty of jazz qualities thrown in for good measure — like a lost Digable Planets or A Tribe Called Quest record. The music skews toward minor key changes and thick bass lines, appropriate accompaniment for the personal rhymes laid down by emcees Modern Marvill and Sleye Kooper. That the two rep nerd culture, with references to “X-Men” and “Star Wars,” alongside raps about serious subjects like relationships and oblique political nods, is a testament to the breadth of the album, which cleverly jumps from subject to subject, remaining fresh throughout.