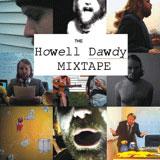 Howell Dawdy plays like the spiritual heir of early-’90s-era Beck, like an eternal loop of the manically insane “Stereopathetic Soul Manure” filtered through the hip-hop-flavored production found on “Mellow Gold.” The alter ego of Lydia Burrell frontman Alex Smith, “Mixtape” is an unapologetically comedic rap album, and one that happens to be particularly well put together. Interestingly, every song is a self-contained vehicle, both sonically and as a standalone narrative, albeit in a way that somehow manages to cohere when listened to as a whole. The difference between a track like “Boo, I’m A Ghost” and “Couldn’t Have No Funeral” is vast, with the former featuring Smith’s deadpan delivery atop spare, lo-fi beats, while the latter is a guitar-driven ballad. Smith’s ability to maneuver between these extremes is on masterful display here, making this more than just a fun gimmick.