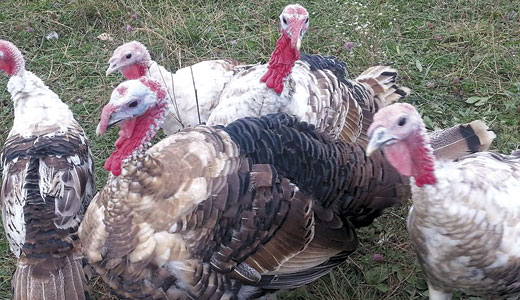 Since we’re approaching the day of giving thanks, I talked with Diamond about her philosophy behind the natural way she raises turkeys. She chose to raise the Sweetgrass breed for its instinct to forage, and for a hen’s ability to hatch her own eggs and mother the babies. Diamond says Sweetgrass turkeys are “sweet, intelligent and docile.” Domesticated turkeys that can breed naturally and that physically resemble wild turkeys define a breed as a heritage breed. It’s those characteristics and gentle personalities of the Sweetgrass that appeal to Diamond, and to her customers.

For Diamond, it’s been a bittersweet year raising Sweetgrass turkeys. She started with 12 fertilized turkey eggs, costing her around $100 for the unconventional breed. Only half of them hatched. Most of a second batch succumbed on hatch day; due to a power outage, the air exchange through the eggshells was compromised by the sudden change in humidity inside the incubator. In her first year hatching turkeys without a hen, she has successfully raised nine birds, all but two promised to CSA customers.

Because the Sweetgrass is a foraging bird, not caged or 100 percent reliant on grain feed, the turkeys take nearly two months longer to grow to a finished weight than their factory-farmed counterparts. Sweetgrass turkeys aren’t built like the Broad-Breasted turkeys shrink-wrapped in our grocery stores. “Their breasts aren’t as big. They look like a natural wild turkey,” says Diamond.

Despite the appeal, heritage breeds make up only 2 percent of the annual turkey population, a very small minority in the shadow of hundreds of millions of industrial fowl that carry 70 percent of their body weight in their breasts. Turkeys raised for maximum meat production in the shortest amount of time suffer weight-related health problems, and the hens have to be artificially inseminated in order to breed. Industrial turkeys wouldn’t be able to forage on pasture, either, because they can’t carry their own weight.

All of Diamond’s animals are pasture raised for the complex, clean-tasting and satisfying flavors that have not graced mainstream tables in over 70 years.

Diversification is Diamond Family Farm’s focus, resisting industry influences to rely on just one breed of a species for meat. “The way we’re doing this is not sustainable,” says Diamond, referring to our commercial meat supply. “Our goal is to raise sustainable animals.” In fact, many heritage breeds of poultry and livestock appear on the Livestock Conservancy’s endangered list.

Diamond’s 16 acres are divided into tight, rotational paddocks. Foraging alongside the cows, Freedom Ranger chickens indulge in their natural scratch-and-peck behaviors, eating bugs that would otherwise bother the cows, and spreading manure over the pasture. It’s an effective system absent from the methods large producers rely on for big production and low prices inside packed warehouses. True to Diamond’s sustainable philosophy, mammals on the farm receive mineral supplements and fodder (hydroponically grown greens) during birthing and lactation, when increased nutrition is necessary. Chickens and turkeys graze pastures for grasses, weeds and protein sources, then are supplemented with locally milled grains — a mixture of non-GMO wheat, oats and corn. Diamond Family Farm does not use pesticides on its pastures.

Pasture-raised heritage breeds mature at a slower rate than breeds developed for maximum meat production. The time Diamond invests with her animals on a daily basis — rotating them to fresh pasture and maintaining the land they graze — is what drives the cost of her humanely raised meats, as well as other meats produced regionally.

Diamond Family Farm’s CSA beef, lamb, chicken and turkey average customers $8 a pound for their preferred combinations of meat shares, purchased in advance for the year. This year’s lucky CSA customers will receive turkeys weighing about 15 pounds each. With an earlier start in 2015, Diamond estimates 18-pound birds for next Thanksgiving. She will breed next year’s Sweetgrass from a hen and a tom she’s keeping from this year’s modest rafter of turkeys. The hen will hatch her own clutch of eggs, mothering them as they grow. True to her CSA vision, Diamond says she will raise only enough animals to meet the pre-ordered demand for 2015.

“My goal is to never sell at a farmers market,” Diamond says; given her devotion to her animals, she simply doesn’t have the time. “My business model is … only raise meat; CSA-based; buy ahead; and only grow what people want.”

Rachel Hurd Anger is a regular contributor to Urban Farm and Chickens magazines.