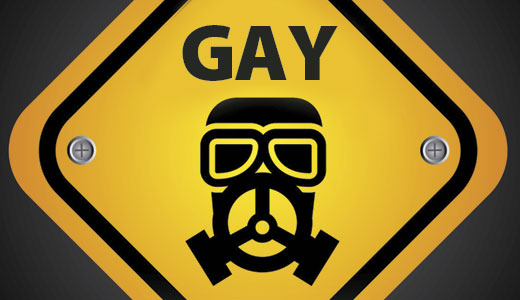 Last week, a teacher at a local Catholic school resigned after being threatened by administration officials to take a 21-day leave of absence. Sam Jones, a former third grade teacher at St. Margaret Mary, decided it was better to resign than to continue working for some complete morons.

After spending fall break the previous week in San Francisco with her husband, Sam returned to school on Monday, ready to teach. Unfortunately, instead of the class clown, it was she who was called into the principal’s office. There, she was greeted by administration officials, as well as representatives from the Archdiocese of Louisville, who expressed concern for the health of the students as a result of her trip to San Francisco.

“I told them that I felt fine, and that San Francisco has not even had an Ebola scare,” Jones told reporters. “But that’s when they told me it wasn’t Ebola they were concerned about. It was fear that I might have caught a case of ‘the gays’ while traveling in San Francisco.”

Jones, married for 12 years and mother of two, admitted that there was that one time in college when things got a little weird with her roommate, but that was the closest she ever came to catching a case of the gays.

“I asked them if they had lost their minds. Their response was that they had received calls of concern from some parents, and that this decision was not reached easily,” Jones explained.

Officials for the archdiocese were not made available for questions, but simply released the following statement: “We are sorry that one of our teachers has decided to resign. She was given the option of a 21-day precautionary leave of absence, but was unwilling to accommodate our request. We have an obligation to the safety of our students, and the peace of mind parents have sending their kids here, and that is the most important part. We cannot put dozens of children at risk of catching the gays, and we stand by that decision.”

The school does not have a stated policy for monitoring the travel activities of its teachers. However, one official speaking on background told reporters that administrators saw so many pictures from San Francisco all over Jones’ Facebook page, they pretty much had to do something.

Harley Dillinger, a health expert at the Centers for Disease Control and Prevention, says that “the gays” is a very difficult disease to contract, and that some people are just born that way. “It’s not like the flu, where someone can sneeze and you can pick it up through the air. In order for it to be a case of the gays, you really have to get close, intimate contact with another person. Most of the time it is direct mouth-to-mouth contact. It’s really a beautiful part of science and nature.”

Jones is in high spirits, and in fact, making light about the incident. “I’m a little jealous of those people getting the Ebola quarantine treatment,” she says with a smile. “I was kind of hoping for a quarantine after this trip. The amount of food and wine … it was one of those where you need a vacation from your vacation.”