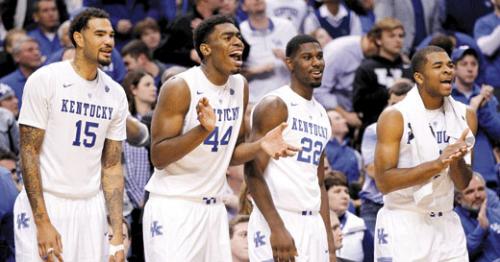 If Rick Pitino started having sex when you started reading this article, he’d be done by now. Of course, that is uncalled for: It’s a juvenile and mean-spirited swipe at a rival coach and entirely unbecoming of the Big Blue Nation. We are, after all, fans of the prohibitive favorite, the loaded No. 1 team in the nation. But we get mouthy when we’re scared — and don’t let any Wildcat fan tell you differently: We are scared.

From top to bottom, at each position, Kentucky is superior to every school in the nation and is poised to dominate. If that sounds familiar, you’ve been paying exceptionally close attention. I wrote that sentence one year ago for the preview of last season’s Kentucky basketball team, and for a while, it looked like it was going to go into the “Smug and Embarrassingly Inaccurate Prediction Hall of Fame,” right between “We will be greeted as liberators” and “Of course Billy Gillispie is sober enough to drive.”

A loss to Michigan State was half expected. A loss in Chapel Hill to the Tar Heels was nothing to be ashamed of. But Arkansas? LSU? South freaking Carolina? We couldn’t even beat the country’s second best, Carolina? Prior to the season, we thought playing the games would be a necessary inconvenience on our way to the ring ceremony. The Big Blue Nation attacked writers for predicting other teams might win, saying it was part of a media conspiracy against us. And now, we were looking at the possibility of a second straight NIT season and a harsh re-evaluation of the coach we regarded as the heir to Adolph Rupp. And then, most frustratingly of all, they went and spoiled our bad mood by stringing together the most thrilling series of victories in NCAA history.

In Bob Dylan’s opus, “Idiot Wind,” a meditation on love and the value of repeatedly calling your spouse an idiot, he sings of a lone and forsaken soldier who “with the final shot … won the war after losing every battle.” It’s hard to find a better description of last year’s Wildcat squad. For the bulk of the season, the wins were unremarkable slugfests, and the losses were nestled firmly between puzzling and depressing. Our superstar, Julius Randle, occasionally looked more interested in impersonating an exceptionally powerful dreidel than making the right play. The Harrison twins — the stoic Texas duo whose commitment served as the Pepto-Bismol to the constant ulcer that was our NIT year — looked like freak athletes who had read a lot about basketball and were eager to try it for the first time. Potential NBA lottery pick and coloring book enthusiast Willie Cauley-Stein sometimes played offense as though the rim slept with his girlfriend and he couldn’t stand to look at it.

When the team slipped into the NCAA tournament as a No. 8 seed — the most glaring symbol of mediocrity among qualifying teams — Kentucky fans felt aggrieved, but we couldn’t explain why. The Big Blue Nation believed in the greatness of this team the way we believed in the risen Christ: as in, we felt it was true in our bones, but we couldn’t point to any evidence.

Then, as so often happens in movies and nowhere else, all these awkward and mismatched parts started to work together, complementing one another and creating something unspeakably beautiful. Julius Randle became a force without having to take over the game by himself. James Young and Andrew Harrison went from looking like squabbling dance partners to floor leaders, hitting clutch shots and leading the team to improbable victories. But, of course, it wouldn’t mean anything if it wasn’t for Aaron Harrison and his testicles.

“He’s got big nuts,” UK center Dakari Johnson said of Harrison in the locker room after one of his many game winners. “I’m surprised he can even walk right now.”

After UK’s can-you-believe-it win against top-seeded Wichita State, many Big Blue fans figured the rest of the season was icing. But then large-scrotumed shooting guard Harrison hit an elbow-three to beat the rival Louisville Cardinals, coached by former UK legend and current premature ejaculator Rick Pitino. As an encore, he broke a tie within the last few seconds of the Michigan game by hitting another 3-pointer. And most dramatically of them all, in the waning seconds of the Final Four, with Kentucky down two points to Wisconsin, he floated up a dead duck of a 3-point shot, barely over the defenders’ fingers. Somehow, like a softball pop-up that lazily drifts over the center-field wall, it carried and carried until it landed in the bottom of the net.

I screamed. I have yet to stop screaming. I doubt that the Commonwealth of Kentucky has been so happy since the early mapmakers said there would be a border between it and Indiana. It’s the sort of magic that can’t be repeated — so naturally, we want to repeat it.

In the John Calipari era, Kentucky fans have grown accustomed to watching their loved ones leave. We smile and wave from afar as John Wall and Anthony Davis make the All-Star team and DeMarcus Cousins becomes the best player in the state of California. Sure, their brief stay means UK greats such as Brandon Knight and Eric Bledsoe get slightly overlooked, but we understand Lexington is not their final destination, nor should it be.

So it felt both alien and gratifying when players looked at the pros and decided the NBA could wait. It was like accidentally blurting out “I love you” at the end of a great first date, and just as you close your eyes and cringe, you hear “I love you too.” Willie Cauley-Stein, Dakari Johnson and the Harrison twins were likely first-round picks, but they came back to town to try to finish the job.

So on one hand, this year’s team is the same frustrating one that disappointed fans for the bulk of last year, minus their two best players. On the other hand, this is a more mature version of a team that went to the championship, but with four brand-new McDonald’s All-Americans.

Some talking heads are skeptical that the “platoon system” — Calipari’s name for his strategy of substituting his starting five with five bench players at once — can work at this high level. True, it has never been done before. In fact, Calipari says the platoons are there to placate the players, and that he hopes to never have to do it again. But doesn’t this hardship sound suspiciously like an advantage? Kentucky is running fresh players at every position, which allows the team to go full throttle without fear of fatigue or foul trouble. Pundits are wondering if the players’ egos can handle sharing playing time equally. Fair point, I guess, though I’d argue that sacrificing personal statistics to play high-level team ball for no money requires less ego than screaming your opinions into an ESPN camera every night.

It’s an attractive story to tell: Nobody believes in us. What good is success without having someone to shake your fist at and yell, “I told you so!” When the Wildcats made their run last year, some of the Big Blue Nation appropriated the lyrics of Kentucky fan Drake’s biggest hit: “We started at the bottom, now we here.” It’s an equally appropriate description of Drake and the Wildcat team inasmuch as in both cases, it’s bullshit. Drake was a child actor who had an agent when he was 8. And Kentucky started ranked No. 1 before their temporary swoon. They started at the bottom in the same way George W. Bush started at the bottom — nobody believed in them after they repeatedly messed up, but they started with all the advantages.

My father always said, “It’s not the despair that’ll get you, but the hope. The only way you’ll be happy is to never have hope.” This proved not only to be an effective strategy to dampen my expectations around Christmastime, but also a great introduction to the world of sports fandom.

Any Kentucky fan can handle losing — we just can’t have hope. Every year, we watch Christian Laettner wave his arms in the air like the inflatable man in front of a used car dealership after he broke Kentucky’s heart. But that year, the Wildcats truly were underdogs. But in 1996 and 2012? Those years, UK was the shark in the NCAA’s koi pond. The Big Blue Nation was thrilled to win, but even more than that, we were relieved we didn’t lose.

And this year? The other night, Kentucky pounded Kansas (a Top 5 team) into stardust. Kansas scored 11 baskets, and Kentucky blocked 11 shots. In the entire second half, Kansas scored 12 points; in three minutes of mop-up time, Kentucky’s 12th and 13th men (Derek Willis and EJ Floreal) scored half of that. It was such a dominating victory that we had to face down the cavernous and terrifying abyss that is hope. From top to bottom, at each position, Kentucky is superior to every school in the nation and is poised to dominate. Dear God, I’m scared.