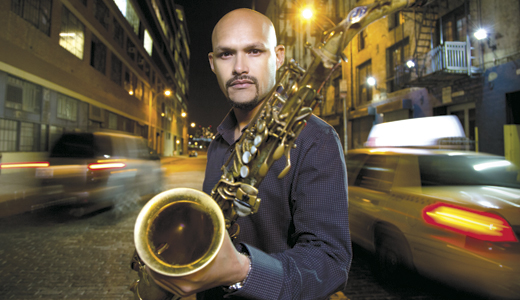 Miguel Zenon is a multifaceted artist: saxophonist, composer, bandleader, educator, philanthropist and more. He’s also a proud Nuyorican, born in San Juan, Puerto Rico, and living in New York with his wife and young daughter. He’s made the cover of DownBeat twice, in 2010 and for the new December 2014 issue. Additionally, he has received both Guggenheim and MacArthur fellowships. He has nine albums as a leader, and plays on dozens of recordings by others. He last visited Louisville almost a decade ago, as a founding member of the SFJAZZ Collective. When he returns, he will be leading, with Luis Perdomo on piano, Hans Glawischnig on bass and Eric Doob on drums. They will feature music from his new album (November 4), “Identities are Changeable,” and newer, unreleased material. It’s an ambitious work, written for a quartet, and expanded with 12 horns, mixing original compositions with snippets of interviews from New Yorkers of Puerto Rican descent.

Zenon spoke enthusiastically to LEO: “I was exposed to music early on; I started at about 11 in a school in Puerto Rico. All the training was classical, so I studied classical saxophone, theory, harmony — that’s where I learned how to read music. When I was about 15, 16, I discovered jazz through friends from school who were passing around tapes, and from public radio in Puerto Rico. I was drawn to it specifically because of the idea of improvisation. Even though the idea was not new to me — improvisation is not exclusive to jazz — the way it was being portrayed by people like Charlie Parker and Miles Davis, the effect that it had on me … I was hearing someone improvising, but the improvisation was coming from a really deep place. The music struck me as having a nice balance between something that was from the heart and something that was more intellectual. I had no one to turn to with questions. But I was obsessed with trying to understand what was going on, what they were doing and why.”

Zenon’s 2013 album, “Oye!!! Live in Puerto Rico,” was recorded with just bass and percussion in a club. He spoke of the difference between that and “Identities are Changeable”: “The approach to both was very different. The one in Puerto Rico was more like playing a session — I liked it, so we put it out. This last recording was definitely more of a concept behind it — the idea of the Puerto Rican community here and the whole sociological aspect of that, and it eventually turned into music. So for this, the road was much longer than the previous one.”

In the new DownBeat article, his bandmates all mention that his compositions were difficult.

“I’m writing what I hear,” Zenon told LEO. “A lot of it ends up being a little more complex, especially what I write for my band, because I’ve been playing with those guys for a very long time. So I know what they play, and I have 100 percent trust that they will do what I need them to do. After you play with someone for a long time, you write music for them. Even though a lot of it might seem complex, at the end of the day, it always comes together. I will take chances with them that I won’t take with other bands. In concert, some 75 – 80 percent is improvised. That’s the core of this music.”