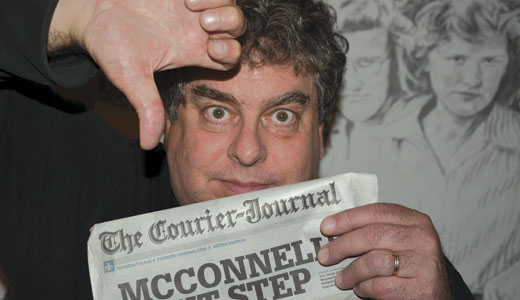 Tristan Conroy is a senior at Centre College. The 21-year old was on campus on Election Day, November 4, when someone showed him a picture from a polling place in his hometown of Louisville, Kentucky. The photo depicted U.S. Senator Mitch McConnell voting while another man stood behind him at another booth, giving the elected official the thumbs down. Tristan looked at the curly-haired man insulting McConnell and instantly recognized him as Joee Conroy. He said simply, “That’s my dad.”

Within hours, the image captured by both Courier-Journal photographer Michael Clevenger and Getty Images photographer Aaron Bernstein went viral. It appeared on the front page of Reddit and in numerous Facebook and newspaper posts. The photo elicited comments from “The Daily Show,” the Christian Science Monitor and comedian Bill Maher, who dubbed Joee “the face of the new election.” All the notoriety led Tristan to post on Facebook later that day, “Dad… You’re killing man!! Keep it up! Joee Conroy you have officially won the Internet.”

For his part, Joee Conroy is a little taken aback by all the attention. Sitting in the living room of his Highlands home days after the election, he is still trying to make sense of his instant celebrity. When he went to vote at Bellarmine University that day, Joee confesses that he never expected to become a national meme.

“Our ballot was really long,” he remembers. “I’m struggling for 10 minutes with my ballot and there is this big commotion. I look up and there are like 150 cameras pointed towards me. I go, ‘What the hell is going on?’ Then I realize it’s Mitch. I just reacted totally naturally as I do when I see something I have an aversion to. Apparently, that jibed with a lot of people’s feelings about Mitch McConnell.”

Joee works as a marketing director for Bearno’s By the Bridge. He is also a musician who co-founded the acclaimed instrumental group Ut Gret in 1981 and a longtime supporter of liberal causes. Joee claims that the only issue that he and McConnell have ever agreed on was opposition to Duke Energy’s attempt to build the Marble Hill Nuclear Power Plant in the 1980s. For that reason, he was supporting Alison Lundergan Grimes’ attempt to unseat McConnell.

“If Alison had won, I would have totally taken credit,” Joee says. “As it is, it was an empty gesture.”

Initially, he did not realize that his thumbs-down had been captured by any of the photographers there to follow McConnell. Joee was heading back to work about 2:30 p.m. when he got a call from his bandmate Jackie Royce. She asked him if he had voted at the same time Mitch McConnell had that day. After he affirmed that he had, she said, “I knew that was you.” Then all the calls, messages and interview requests started coming in from all over the country. Joee estimates that he has made at least 200 new Facebook friends since the photo went viral. He has also had a number of people post insults on his Facebook page. He has “liked” every one of them.

Joee doesn’t have any regrets about his gesture. “Mitch was there for two seconds,” he claims. “It was kind of a photo op for him and I guess I ruined it. I’m happy. If he was absolutely voting, I would have felt a little bad about it because it is a sacred trust. But I think he was just there for the photo op. Some aide probably already filled out his ballot and sent it in. He was messing with my day, so I messed with his.”