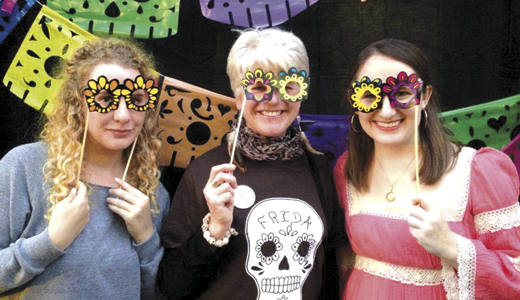 The Day of the Dead (Dia de los Muertos) celebration and the colorful folk art surrounding the ancient Mexican holiday have become increasingly popular in the States and throughout the world. Mexicans honor and remember their deceased family members and ancestors with beautiful altars (ofrendas) bursting with colorful sugar skulls, flowers, food, alcohol, photographs, papier-mache skeletons (calacas) and other mementos. Treasures like these are brought to the graves and left to honor the dead along with a bountiful display of candlelight.

This Friday, the South Fourth Street Retail District (SOFO) will celebrate the Day of the Dead Louisville style in conjunction with the First Friday Trolley Hop along the South Fourth Street Retail District in downtown Louisville, between the Seelbach and Brown hotels. The family-friendly affair is sponsored by SOFO, the University of Louisville Latin American and Latino Studies (LALS) program and the Louisville Downtown Partnership (LDP).

In keeping with the cultural tradition of Dia de los Muertos, a number of temporary altars will be installed along South Fourth Street. The University of Louisville will create altars to Nelson Mandela and Maya Angelou, while the soon-to-open Hilton Garden Inn will erect a shrine to honor celebrities who have died in famous hotels. South Fourth Street radio stations will build altars devoted to famous deceased musicians, and a special altar will be erected to honor artist Frida Kahlo. A public altar will also be available on the night of the event for anyone to place objects in honor of deceased loved ones.

Along with Block Party Handmade Boutique and Regalo, CRAFT(s) Gallery is one of three galleries along Fourth Street hosting Dia de los Muertos exhibitions. Gallery owner Karen Welch explains, “Our annual Day of the Dead celebration grows each year as word gets around Louisville about how much fun it is to embrace this rich cultural tradition, complete with Mexican entertainment,  great ethnic food and beverages.” Welch adds, “In Mexico, the annual celebration lasts for several days and usually takes place between October 31st and November 2nd. But we’re doing it a bit later, as we wanted it to align with the Republic Bank First Friday Trolley Hop.”

The Dia de los Muertos Trolley Hop will feature plenty of hands-on workshops, including face painting, sugar skull decorating, paper flower making and much more, compliments of the LALS program. Partygoers are encouraged to dress in costume, especially as Kahlo or their favorite calavera (skull). Organizers are seeking to gather the largest collection of Kahlo lookalikes to assemble for a record-breaking photo.