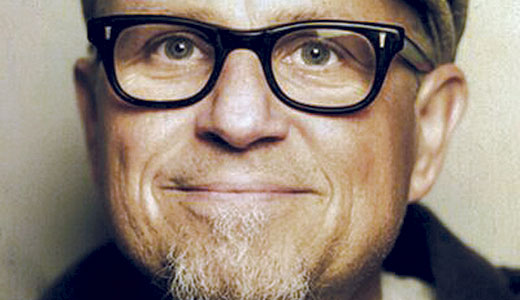 Bobcat Goldthwait has long been known as “The Wild Man” — at least since the late  ’80s and early ’90s, when he was one of the biggest names in all of comedy. For those old enough to remember, hearing his name immediately conjures the image of a sweaty, long-haired, stuttering gorilla throwing nervous, bug-eyed fits onstage, at times barely articulating even a simple thought. That image, however, is a far cry from the soft-spoken, contemplative voice that I heard on the other end of the phone as we chatted about his upcoming show at The Laughing Derby.

Goldthwait initially left the stage in 2005, pursuing writing, directing and acting in self-produced films that have cultivated a loyal cult following. He has also dedicated himself to some pretty hefty behind-the-scenes work on major network shows. He’s been on the road sporadically since 2008.

LEO: You started doing stand-up in your teens. What drew you to comedy at such a young age?

Bobcat Goldthwait: That’s a good question. I was about 9 years old when I saw George Carlin on TV, and I asked my mom what he did for a living, and she said, “No, that is what he does for a living.” I was like: Oh man, that’s great! That is the greatest thing ever!

LEO: I can’t imagine what it must’ve been like as a kid to wrap your head around the idea that a guy gets paid to talk.

BG: Yeah … and just be funny. I was one of the class clowns growing up, so the fact that I could parlay it into a career was pretty exciting.

LEO: When people hear your name, they get a very specific image of “The Wildman.” How much of that is the real Robert?

BG: The earlier version of that character was that when I did stand-up I could say anything outrageous, even stuff I didn’t necessarily believe in, just for shock value. Later on, I could still do that persona but not compromise how I saw the world. I find it interesting that that character is a Rorschach sort of thing for people. … I read about all the drugs I took and stuff; the reality of it is: I got sober when I was 19 years old. So I’ve been sober for 33 years, the whole time I did that character. I don’t usually talk about it because I don’t think it’s anyone’s business, but I think it’s kind of funny.

LEO: To me, that character seems more like it comes from the id than drugs.

BG: Yeah, it was kind of an id thing. I was just letting out a lot of anger and frustration. I was a lot more influenced by the Sex Pistols and The Ramones than I was [by] Johnny Carson or Jerry Seinfeld.

LEO: In the 35 years you’ve been doing stand-up, the industry has changed a lot; is it for good or for bad?

BG: I think one of the good things that has happened is that there are less gatekeepers. … People can now generate their own fan base through social media, podcasts, things like that. Thirty years ago, your only hope was to get on “The Tonight Show” and then maybe HBO. Now, it’s cool that it’s diverse. The thing I don’t like about it is almost the same. The other side of that is that comedians are supposed to give up a lot of their personal lives to promote themselves. I haven’t compromised who I am just to sell tickets.

LEO: Social media keeps us connected by keeping us up-to-date on each other’s lives, but at the same time, personally we’ve never been so disconnected.

BG: Sometimes I have to remind myself that my iPhone, if it doesn’t have a charge, then it’s just a brick. Once you realize that it’s just a brick, you see that these connections you’re making with people in cyberspace aren’t real. They are a little bit, in some ways; but in a lot of ways they really aren’t real.