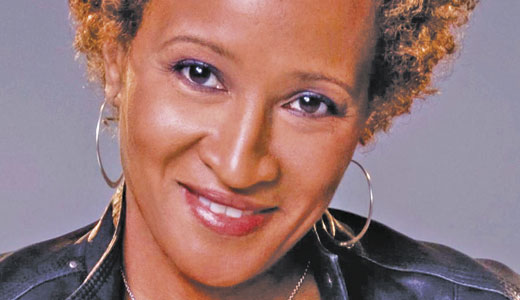 Wanda Sykes is one of Hollywood’s premier funny ladies today. She has a sharp wit and a sharper tongue, holding nothing back when she takes the stage. Sykes, who hails from the Washington, D.C., area, has been on the road for more than 25 years now, and has become one of the most best live performers in the industry. Sykes’ talent for passive sass with a casual delivery has also led her to success all over television with large or recurring roles in classic shows such as “The Drew Carey Show,” “New Adventures of Old Christine” and “Curb Your Enthusiasm,” as well as the current political sitcom “Alpha House” (now in its second season on Amazon Prime). Her easily identifiable voice has also led to lots of work in the animated features “Over the Hedge,” “Rio” and the “Ice Age” series. Sykes took a few minutes out of her busy road schedule to call in and chat with LEO about family, politics and more.

LEO: In your early days, who were the people that inspired you to go onstage?

Wanda Sykes: Definitely Moms Mabley, because I watched her as a kid — as a kid we used to watch “The Smothers Brothers Comedy Hour.” … It’s a shame to say “Ed Sullivan,” but yes, I’m that old. … “Laugh-In.” There were all these great variety shows, so I was exposed to a lot of comedians, but I never could wrap my head around, “How do you get that job?” As a kid I always wanted to do comedy; I just didn’t know how to get there. There wasn’t a comedy class at my school or anything.

Then as I got older, of course, George Carlin, Richard Pryor … “The Carol Burnett Show” was one of my favorites. I loved it when Joan Rivers would sit in for [Johnny] Carson. Bill Cosby, “Sanford and Son,” with Redd Foxx. I can still watch those and they crack me up.

WS: Yeah, I always wanted to do it, so I just made myself do it one day. I heard about a talent show that a radio station was sponsoring, and comedy was one of the categories. I wrote some jokes and tried it out, and that’s when everything made sense. I guess this is how you do it.

LEO: Has becoming a mother had an effect on the material you write?

WS: Definitely. It’s about what’s happening in my life. I used to make fun of comics that talked about their kids all the time in their act, but now I get it. It becomes your world. I can’t sit and write a bunch of jokes about politics and all, because I’m not really paying that much attention. I’m busy, ya know, trying to make sure my kid wiped his ass. … It’s just a different world. These are the things that are important to me now, so that’s what I write about. If I did write about other things, it would feel so manufactured.

LEO: Is having a family now making it harder to be on the road?

WS: Well, it’s making it harder on my family for me to be on the road. And yeah, I miss them when I’m away … but man, I enjoy being in a nice hotel; it’s quiet, I get to sleep, I get to watch whatever the hell I wanna watch. I can’t have my “Investigation Discovery” on when the kids are in the house; I can’t let them know how to get away with murder.

At home, by the time I get to sit down and watch TV, I fall asleep, I’m so tired. I miss my family, but when I’m home I’m so rested and in such a great mood, I’m sure it’s worth it.

LEO: You said you aren’t as political as you used to be, but we just had some pretty big elections. Did you follow that at all?

WS: Yeah, of course, I voted and all. I am still involved. But here’s the thing … yes, it’s bad for the country, but it’s so good for comedy. Some of the best comedy happens when the Republicans are in charge, so I’m looking forward to the new Republicans getting to Washington … you know there’s going to be some crazy talk. It’s going to be genius.

LEO: What do you think your character from “Alpha House” (Sen. Rosalyn Depeche)’s relationship with Sen. Mitch McConnell would be like?

WS: Oh, wow! Hmm … he’s not like Sen. Gil John [Biggs], John Goodman’s character, at all. It would be like a nice-nasty: [She’s] gonna be professional, nice and cordial, but if he fell down a flight of steps, I don’t know that it would bother her too much. She would be suppressing a laugh in there somewhere.