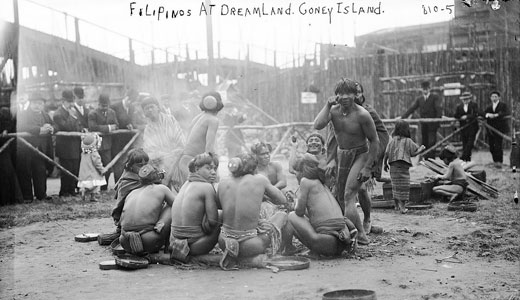 Igorrotes at DreamlandPhoto courtesy of the Library of Congress

Little more than a century ago, Louisville played host to one of the most extraordinary sideshows ever to tour the United States. A “human zoo” of 50 tribesmen, women and children from the Philippines performed a distorted version of their customs for the paying public. Rather than provoking outrage, as this would today, the Filipinos, who were billed as “head-hunting, dog-eating savages,” became a must-see attraction in Louisville and every other town and city they exhibited in across the U.S.

My new book, “The Lost Tribe of Coney Island,” has uncovered the true story of the Igorrote tribespeople who were brought to America in 1905 by a showman named Truman Hunt. The Igorrotes captured the imagination of America and became a national sensation. They exhibited in 50 towns and cities across the country and were written about in newspapers coast to coast. They inspired poems, newspaper cartoons, advertising slogans and even children’s toys, and were visited by millions of ordinary Americans as well as anthropologists, famous singers and actors, and even President Theodore Roosevelt’s daughter, Alice.

Hunt had a strong personal connection to Louisville. In 1904, he fell in love with a young Louisville native, Sallie Gallagher, whom he’d employed as his stenographer at the St. Louis World’s Fair. After a whirlwind romance, the couple married that December.

Sallie was raised in a house on Seventh Street in Limerick, so named because nearly all the residents who had come there to work in the Louisville and Nashville Railroad freight yard had emigrated from the Irish county of the same name.

When in the summer of 1905, Sallie found out she was expecting a baby, Hunt sent her to live with her father, aunt and sisters (her mother had died when Sallie was a girl), believing that touring with a fairground act was no life for a woman in her condition.

Hunt visited his wife often. One day he came with good news: he was bringing the tribe to Louisville and to the Kentucky State Fair in Lexington.

In Louisville, the Igorrotes exhibited in the newly opened Fontaine Ferry Park on the west side of the city. Visitors arrived by steamboat by the thousands from downtown Louisville. They flocked to the Igorrote Village, with its thatched-roof huts and scantily dressed inhabitants. The tribespeople sang and danced, they held mock battles, spear-throwing contests, funeral rituals and even weddings. The visitors listened incredulously as Hunt pointed out the tattoos on the Igorrotes’ bodies and explained that whenever the men came back from a successful headhunting foray, the entire village had these inked onto their chests.

By far the most popular feature of the tribal “show” was the dog feasts. Every day, mutts were brought from the city pound to the Igorrote Village to be slaughtered and cooked by the tribespeople in front of their wide-eyed audience. Though a handful of onlookers complained, the vast majority lapped it up.

After Louisville, things began to go downhill for the Igorrotes. Hunt had promised to pay them $15 each a month in wages, and they hadn’t seen a penny of their earnings. Their accommodations were growing increasingly cramped and uncomfortable.

Word reached the U.S. government that Hunt was mistreating the Igorrotes. Alarmed, the government sent an agent to investigate.

Hunt received a tipoff that the government man was coming. He fled, taking a group of tribespeople with him. As Hunt and the Igorrotes crisscrossed America, they were pursued by the government agent, Pinkerton detectives, creditors and ex-wives accusing Hunt of bigamy and of abandoning an infant child.

The most extraordinary sideshow in American history was about to climax in a scandalous courtroom confrontation in Memphis. s

For a chance to win a Kindle preloaded with “The Lost Tribe of Coney Island,” and to see photos and read more about Truman Hunt and the Igorrotes, visit claireprentice.org.