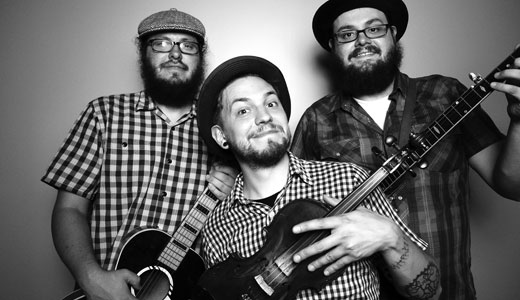 In November, The Tillers will donate 50 percent of their merchandise profits to The Cure Starts Now Foundation in honor of Lauren Hill, a terminally ill 19-year-old freshman at Mount St. Joseph in Cincinnati, which is also the band’s home city. And, for the bluegrass trio’s multi-instrumentalist/singer Mike Oberst, the connection to Lauren is more than something he just saw on the news: His wife works with Lauren’s mother, which has led the to the two families spending time together.

“[Lauren] is really adamant about raising money for kids with brain cancer, to try to find a cure,” Oberst says. “So, this fundraiser is 100 percent in honor of Lauren and her spirit.”

Hill has been able to raise more than $176,000 — and having a venerable local band in the mix should help raise even more cash. The Tillers, who formed in 2007, have a smooth, natural, old-timey style — which, for Oberst, goes back to his childhood.

“For me, it was from a lot of music my parents would play,” he says. “My dad played guitar, my mother played lap dulcimer, and I was a big fan of bluegrass music and other sorts of folk music styles: Scottish folk music, African folk music, all sorts of music. I was exposed to a lot of music that existed before American, rural music, which is what The Tillers try to stick with.”

But, like many of today’s folk revivalists, as a teenager Oberst was drawn into the rebelliousness of punk, which still indirectly influences the sort of music he currently makes. “It doesn’t affect us too much within our music, but it does within our playing style,” he says. “I think we draw from its energy.”

The main focus is to keep moving forward. “I’ve been doing a lot less listening lately and a lot more attempts at creating,” Oberst says. “Our early albums are original songs mixed with traditional songs. The traditional songs outweigh the originals on those early albums. Our most recent album is 100 percent original. We’ve found better ways to write and channel our creativity. This winter we’ll use as a hibernation, to lay low for the winter and work on songwriting. Whether we record or not, we just want some creative time.”