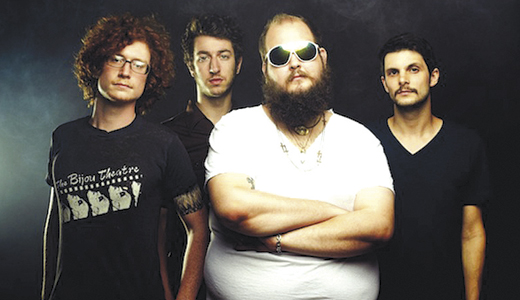 To say that the Grand Rapids, Michigan, electro-pop band Stepdad makes colorful music is an understatement. Theirs is a dreamy, video-game-influenced romp that sees the band dealing with everything from personal aesthetics to ripping themes for popular comic-turned-late-night-cartoon “Axe Cop” for a sound that is part ‘80s arena anthem and part bubblegum emo. It makes sense, then, that the band has been featured in all sorts of pop culture, from video games to television shows.

For songwriter and original member Ryan McCarthy, describing their sound is simple: “We prefer to just call it pop music. Describing music is one of my least favorite things. And bowling.”

Despite their onstage pomp and antics, their origins were remarkably uncomplicated. “[We] started in Chicago. Mark [Tafel] and I were roommates and discovered we had similar styles of songwriting,” McCarthy says. “We wrote the songs for the ‘Ordinaire’ EP and sent them out into the blog-osphere. After that, everything just weirdly fell into place. We would have no idea how to re-create if we started Stepdad again.”

And they’ve done whatever possible to keep it easy and simple ever since. “We do use a lot of mostly electronic sounds,” McCarthy explains. “Mainly because in the beginning all we had access to was our laptops. It’s become an instrument for us. We used a lot of real instruments on ‘Wildlife Pop’ because we had access to a whole studio full of them.”

Of their songs’ meanings, he notes, “We try to write songs that don’t require people to think too much into them. We’d rather people be humming the melody than trying to figure out what the lyrics in the verse mean.”

Continuing, he adds that their version of a great show is “flashy lights and really punchy drums.” It’s that laid-back sense of whimsy that has earned Stepdad their aforementioned prime-time exposure. But McCarthy doesn’t feel that it’s had an impact on their songwriting, save that it’s helped their reputation. “I wouldn’t say it’s affected our songwriting,” he says. “It’s definitely given us more exposure and allowed us to do this for a living. “

You can check them out this Tuesday, Nov. 11 at Zanzabar.