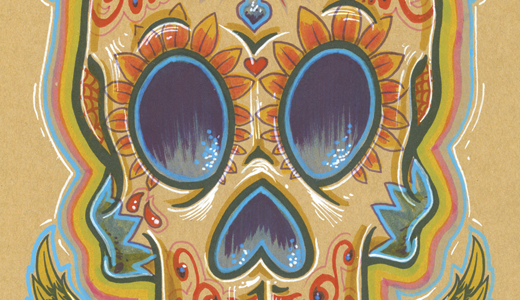 'Day of the Dead Skull' by Jeral Tidwell

If you’re a person who thinks Halloween should be a federal holiday, don’t despair now that it’s over, especially if you have a skeleton or Frida Kahlo costume. Louisville is celebrating the Day of the Dead (Dia de los Muertos) during the Nov. 7 First Friday Trolley Hop, with the galleries along Fourth Street hosting exhibition openings from 6 to 10 p.m.

Jeral hasn’t met a skull or skeleton he didn’t like — he’s based a career on them — which makes him well suited for Day of the Dead. He has an international legion of fans, largely because his highly detailed art has made its way onto about any surface you can name. On the other hand, beautiful stylized foxes and fox hybrids (what she calls “vulpine mixes”) inhabit Sarah’s art world, so she had to work a little harder to get into the groove. The results are cute and cuddly skulls, if there is such a thing.

Joshua Jenkins is having a more traditional exhibition at Regalo (562 S. Fourth St., regaloart.com). “Transition” is about self-discovery, common among artists and people in general. And yet, if we stretch the idea of Dia de los Muertos a little, this show fits in as well. As he obviously has not gone through the final transformation we all must do, his show gives viewers the chance to celebrate his changes (and reflect on their own) while alive. Remembrance is a big part of the Day of the Dead.

“Over the years, history has shown that many artists go through numerous periods within their careers,” says Jenkins. “Approaching just shy of my third year pursuing a full-time career in art, I realize that I have progressed a great deal as an artist in such a short period of time. During this transition, as I am still discovering myself and the new direction [in which] it leads me, I encourage the viewer to appreciate the confused beauty … crawling its way out of my soul and onto my canvases. Transformation is a necessary attribute to have if one wants to survive. As it may be scary at times, I say to embrace it and to enjoy the in-between.”

The exhibition will be up through Jan. 1.

Next door is the Block Party Handmade Boutique (560 S. Fourth St., blockpartyhandmade.com), which is showing the art of Karen Abney through November. She’s another artist well suited for Dia de los Muertos.

She says this work is “a conglomeration of … favorite things: found objects, trees, Mexican milagros and odd containers.” Abney’s study of traditional religious folk votives and charms called milagros makes this holiday of particular interest to her. And her artworks are funny too, incorporating what she calls “a ‘gringo’s’ view” of what it means to celebrate the Day of the Dead in Louisville.