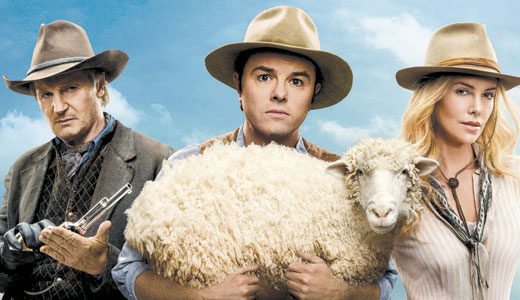 "A Million Ways to Die in the West"

A MILLION WAYS TO DIE IN THE WEST

Crazy-assed Seth MacFarlane goes completely nuts here: writing, producing, directing and starring in this spoof of Westerns with Charlize Theron, Liam Neeson, Amanda Seyfried, Neil Patrick Harris, and a host of others. He’s the cowardly sheep rancher who loses his girl to a tough hombre, is taught to be tough by a gunslinger-gal, eventually facing down her boyfriend’s big six-guns. But that’s all just an excuse for MacFarlane’s patented — and usually painful —pratfalls, double-entendres and impalements. Funny as hell in spots, it runs a bit long, though the rabid audience in the theater didn’t seem to mind.

If you’re a Tom Cruise hater you’ll love this sci-fi flick that blows Cruise’s brains out every few seconds — he dies a hundred times before the slam-bang finale. First introduced as a cowardly, smarmy prat, pushing propaganda while the Earth is being lost to an invincible alien army, what happens next is brilliant. An outrageous, unique, entertaining, colorful, brutal and mind-bending experience, never less than riveting. With Emily Blunt as the warrior babe who trains, kills, and retrains Cruise, big Brendan Gleeson as a general, and Bill Paxton (who nearly hijacks the movie) as the ass-kicking Master Sargeant.

A PEOPLE UNCOUNTED: THE UNTOLD STORY OF THE ROMA

Never heard the term “Roma?” How about “Gypsy?” That’s how we refer to them in the US, usually pictured as itinerant wagonloads of dirty families, rolling picturesquely from village to village; thieving, whoring and curing werewolfery. In truth they are Europe’s largest ethnic minority, and historically the most persecuted. This doc looks at their profoundly old and complex culture, telling of their dark history (including as focus of Hitler’s “Final Solution”) and their bleak future. A people without a country, despised wherever they go because … Well, we won’t spoil it.

Absolutely the BEST supernatural show on the tube! Lesley Sharp (“The Full Monty”) is a shabby, bedeviled medium being studied by college prof Andrew Lincoln (“The Walking Dead”). But this is no childish jump-out-and-go-boo! spooker, instead you’ll find it atmospheric and intelligent, delving into “what if?” and all the consequences the answer might entail. Adult, emotional, affecting, and very, very creepy, this quickly became one of our favorite BBC shows – only to see it canceled during this season. But the producers nicely dreamed up a moving and very satisfying wrap-up storyline that made it all perfect. Get both seasons.

Yes, we are crazy for both horror anthologies and bug-movies, making this low-rent trio of entomological terror-tales a triple treat. There’s an odd theme of body-image underlying each one, which some have labeled as “anti-female.” We didn’t get that, but we did get the pee-willies as bugs chewed in through bedroom walls and out through human flesh to make their point. What point? That horror anthologies rawk! Stars no one you ever heard of, but whose comeuppance you won’t soon forget.

This groundbreaking Netflix series stars Famke Janssen, Landon Liboiron, Dougray Scott and Bill Skarsgård in a totally unique tale built around the brutal murder of a teenage girl in a small PA town. With dark, supernatural overtones, very real voices and impossible, naturally unpredictable – read “real” – characters, this defies easy categorization yet remains engrossing, scary and addictive. Our only complaint is the level of gore, and nudity, largely the contribution of producer Eli Roth. But that’s hardly a problem, now is it?

Adrian DiGiovanni plays a suicidal man who realizes that something in his filthy bathroom is talking to him… It’s the mold! And the best part? It’s got the voice of Jeffrey “The Re-Animator”Combs! Little by little the mold convinces him to clean up his act and get back on the path. It even helps him find a girl (sort of). But then his broken-down TV starts talking to him, too. And says the mold is not to be trusted. The best talking-fungus movie we’ve seen in a coon’s age and a; darling of film festivals from coast to coast.

One of the more original and thought-provoking anime titles around. A middle schooler receives a strange letter asking him “wind or not wind?” He randomly chooses “wind” – and living, breathing dolls show up at his door! Meanwhile, in an alternate universe, the same boy (if older) gets the same letter and chooses “not wind” – and finds himself communicating with his alternate self. It’s all a deep and mystical allegory for growing up (or maybe not), as well as a breathtaking, mind-blowing adventure with some of the best animation that TV has to offer. Truly unique, mysterious and clever.

Comic-book fans know Steve “The Dude” Rude as an artistic legend, a constant inspiration, and the creator of the massive, long-running “Nexus” series. But they may not know that he suffers from bipolar disorder, which caused him to walk out of his career in 2009 to take up the supposedly less stressful mantle of “fine art producer.” This doc catches up with Steve, and examines the pain and crippling humiliation of being bipolar. We’ve missed him.

George “Sulu” Takei’s infamous “of course I’m gay!” autobiography may have been the darling of the book circuit, but this hyperactive video bio takes us – literally – where no man has gone before. Flashing his famous broad grin, we follow on a funny, entertaining exploration of his life and career from Japanese-American internment camp prisoner to American icon, thoroughly pleased to be more popular at age 77 than he was playing the Enterprise helmsman at age 29. Guests include his husband/business-partner Brad and a few of his millions of fans. Great stuff.

A.k.a., “Poklosie”, this is the devastating tale of a Polish man who discovers a horrifying secret in his family history – and the Jewish family who literally vanished without a trace at some time in the past. He and his brother argue over wanting to set things right, with the other locals willing do anything to keep the past buried. A brutal and disturbing look at Polish anti-Semitism and the convenient opportunities that history sometimes provides.

The Fess Parker original series: all 165 episodes; 6 seasons on 36 disks. What more could you possibly need to know?

Adrien Brody and Kristen Connolly are both terrific in this slick if, frankly, less-than-factual telling of the life of Harry Houdini. But we’re not complaining: Houdini thrived by cultivating his own mystery; The History Channel is merely carrying on this tradition of ballyhoo. A master illusionist, locksmith and guru of self-promotion, he used his nearly superhuman physique, unnatural flexibility and reckless nature to become the most famous and successful liar of all time. Then, after the death of his beloved mother, he spiraled into a tireless tirade against the spiritualist movement that had swept the Western world. Entertaining as hell.

IN THE FLESH: SEASON 2

One of the better post-modern zombie soap-operas (the ones in which the rotters are treated as resurrected loved-ones, not slavering killers) courtesy of the aromatic folks at the BBC. Terrific 20-something “teen” thesp Luke Newberry leads as one of the first of the Undead to be “rehabilitated” back into his picturesque little village. Problem is: few of his townsmen are happy about it. And now a violent new group of Partially Deceased Syndrome sufferers rises, the Undead Liberation Army, giving political leaders the excuse to start an extermination campaign.

JACK AND THE CUCKOOCLOCK HEART

One strange, if beautiful, animated kids tale as only the French can do it. A 19th-century Scottish boy, born with a frozen heart, is saved by a midwife’s emergency coronary cuckoo-clock-ectomy. He will live as long as he never touches the clock in his chest, is never angry nor in love (sounds like our wedding vows), all of which he does, of course. The requisite girl has rose tendrils as hair and is blind from crying tears of ice. Okay, let’s call it “whimsical.” Deep and profound, it gave us the willies at times, but our little nieces and nephews ate it up, especially the songs. Inspired.

We continue to be charmed by this toss-off comic PI drama starring hunky Allan Hawco, with “Braveheart”s Sean McGinley as his jarhead dad. Together the two Irishmen sleuth for a living in the picturesque seaside town of St. John’s, Newfoundland, Canada, this season moving from the seat of his cherry GTO into a proper office (over the local pub, of course). Also new is a pretty female lawyer who complicates matters between Doyle and his girlfriend. To us, this is “The Rockford Files” meets “‘Van Wilder”, with Doyle’s crazy, close-knit relatives only adding to the fun. One of the best shows you never saw. Fix that.

Troubled Adam Lynch (rising horro-writer/director Kristian Hanson) believes he is just a character in a video game, required to blindly crush the skulls of everyone he meets with his handy sledgehammer. Not grossed out yet? Okay, he then peels off and collects the flattened faces of his victims. Check, please! Oh, don’t go yet: there’s a carload of nubile teens heading for that secluded campground nearby, This has become something of a favorite among the hard-gore community, evoking the heyday of the mad-slasher movie – with a sledgehammer, of course – and is actually pretty funny at times, if you’re into this sort of thing.

This one-off literary TV murder mystery from Canada is a Master’s course in how to make a movie. The victim is the town’s sainted schoolteacher, so the authorities call in The Big Guns – inspectors Nathaniel Parker, (“The Inspector Lynley Mysteries”) and Anthony Lemke (“White House Down”) – who come to suspect that another murder may soon be in the offing, and their very presence puts everyone in the village at risk. The terrific cast continues with Kate Hewlett (“Republic of Doyle”), as the victim’s best friend, and Susanna Fournier from “Being Human” as an upstart investigator who throws the guys’ theories for a loop. Nicely done.

A masterpiece of British history-drama, telling the true tale of 1963’s hijacking and looting of a Royal Mail train filled with millions of dollars in cash. Told first from the Robber’s, then the Copper’s point of view, it details the largest ill-gotten reward in British history (before investment banking, of course), with Luke Evans as the lead baddie, surprised at the size of the haul, which puts his gang in exceptional jeopardy. Oscar-winner Jim Broadbent is the detective charged with bringing the culprits to justice. Clever and inventive storytelling.

THE PROSECUTION OF AN AMERICAN PRESIDENT

Author and Charlie-Manson prosecutor Vincent Bugliosi declares war on George W. Bush in this intense examination of his botched plan to invade Iraq, destabilizing the entire Arab region, spawning shit that we’ll be dealing with for centuries. Simply put: He lied. There were no weapons of mass destruction, no new threat to America or its allies, no reason to spill the blood of young men and women except to serve Bush’s own political agenda and fatten the wallets of industry fat cats. But this is not some fevered rant: it is the best-reasoned, best-argued examination of a failed presidency that we’ve ever seen. Don’t miss it.