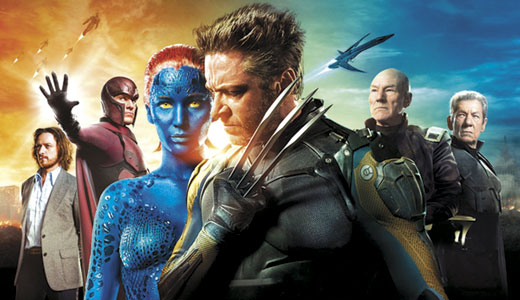 "X-Men: Days of Future Past"

We went to see this at the theater, and walked out after 10 minutes. A lifeless, calculated, corporate, strictly-for-the-bucks CGI exploitation of the legendary 1959 “Rocky and Bullwinkle Show,” neither funny nor entertaining. For less money, ask for “The Complete Mr. Peabody & Sherman Collection,” a 2-disc set of all 91 original adventures voiced by producer Bill Scott –

who also did Bullwinkle J. Moose and Dudley Do-Right – and then-45-year-old veteran Walter Tetley as Sherman.

X-MEN: DAYS OF FUTURE PAST

This high-concept splice of the two “X-Men” plotlines – Charles Xavier’s “present” (Patrick Stewart) as head of the X-Men, and his “past” (James McAvoy) when he first befriends Erik Lehnsherr (Michael Fassbender) – is the type of thing that usually works better on paper, but director Brian Singer pulls it off flawlessly. Any further description should be unnecessary, except to say that the time-travel gag is brilliant, and it’s great to see all the old and new characters again. Sadly, no bonus goodies in this release, but maybe in the much-anticipated extended cut due in early 2015.

This out-there doc on the U.S. House of Representatives and their fanatical Republican … uh, wait a minute … that’s “Assholes.” “Boobs” is a look at the life of Precious Muir, an attractive British girl willing to do anything – including expensive cosmetic surgery – to make it as a buxom NY model. Filmmaker Stone Roberts gets up close and personal, exposing her plight, those gravity-defying solutions, and the surprising consequences of the added, er, attention.

The 10-millionth “secluded resort guests must band together to survive” mystery-thriller this year? Well, maybe, but with a cast that includes Mena Suvari, Brian Austin “Desperate Housewives” Green, Joanne “Warehouse 13” Kelly, and the underused Zack Ward from “Titus,” you know to expect more. When they arrive, the resort is deserted, but the mysteries are more physical than poltergeisty, with hints of aliens, MIB and time/space vortex thingies. Or maybe not. A nice change of pace from the same-old same-old.

Do you have any idea how close you come each and every day to changing someone’s life forever? Sometimes all it takes is a kind word – something as simple as asking, “How are you today?” or “Can I help you with that?” – to effect change. And what if each of us tried? Could we actually change the world? That’s the idea behind this doc, looking at ordinary people who, in a simple act of grace, unexpectedly saved someone from poverty and/or hunger, finding happiness and reward along the way. You are the cure for all the world’s ills. Engage.

Originally a Japanese adult computer game, then a Manga, then this anime TV series, it morphed into a theatrical movie in 2010, which led to an additional anime series due later this year – and a second movie to come out in 2015. Can you say, “popular?” The “it” is the story of Shiro, an orphan raised by a sorcerer, who tries to help others with what little magic he has learned. But when forced to exceed his mystical training he is saved by a beautiful spirit warrior named Saber. Clearly out of their league, the two compete in the Holy Grail War, a deadly competition that can reward them with limitless power. Anime at its best.

In the best movie you never heard of, brooding Aboriginal cowboy/detective Aaron Pedersen tries to solve the murder of a teen girl with links to his own daughter. A simply terrific murder mystery with great texture, great characters, an earthy script, and landscapes that would have made John Ford weep. Co-stars Hugo “The Matrix” Weaving, Jack “The Great Gatsby” Thompson, Ryan “True Blood” Kwanten, lovely Tasma Walton from “Home and Away,” and a cameo by Bruce “The Mouth of Sauron” Spence as the coroner.

A crazy-quilt of murder, politics and religious paranoia aimed at the legion of Fox News mouth breathers who believe that there is a national “war on Christmas.” James Remar stars as an evangelist, the only obstacle in Senator Bruce Davison’s plan for religious reforms that will (gasp!) threaten the Christian faith! When he is framed for murder, the reforms go through, spawning an escape and a big chase through hell-bound America. Cue devilish laughter. Insanely insipid.

Fans of “The Daily Show” will recognize this as the miniseries promoted by Maggie Gyllenhaal in her appearance earlier this year. She plays Nessa Stein, a woman who inherits the family arms business, yet passionately acts to reconcile the Israelis and Palestinians. A provocative and very adult look at the nature of conflict, the chains of history, and the way that industry muzzles any rational voice – a gag that would have sunk this very project were it not for Maggie’s outspoken support. Surprisingly sexy, the all-star international cast includes Stephen Rea, Lubna Azabal and “Pirate Radio”s Katherine Parkinson.

Melissa Carnell, who has made quite a name for herself in such indie horro-flicks as “Boggy Creek” and “Humans Versus Zombies” shines here as a young woman who bolts from her city life to the family cabin deep in the piney-woods. And from the title you’ve probably already guessed that there’s a werewolf waiting there for her. And what a werewolf! One of the best full-hair-suits in memory; this thing is scary as hell. And watch for gorgeous, scarlet-tressed Irena Murphy as the werewolf’s lover in a fully-nude campfire hoedown that’ll set your own little werewolf rising as well. Recommended.

A film-festival darling in Europe, this Gay Polish rom-dram follows an outwardly happy young man, seemingly in love with a beautiful woman, who comes to realize that he’s not fulfilled. But unlike 99% of such flicks, this one doesn’t let the girlfriend simply evaporate. She goes through as many changes as he does; clinging at one point, angry at another, believing that it is her “fault”, even to the point of violence until … Well, we won’t spoil it. Very frank and explicit, just like real life (whatever that is).

A friendly and uplifting doc on the “recent” push to move our dinner tables closer to farm fields. (Actually, this was the norm for centuries, but we lost ground about 30 years ago when agribusiness began to invest in political races and illegal patents. But we digress …) A new wave of urban farming has swept the nation: whether it be chickens in NYC, rooftop tomatoes, or mushrooms under the porch, America has once again fallen in love with growing their own veggies. And it’s so friggin’ fun and EASY! Go on, get as dirty as you wannabe. Infectious.

If you’re not hooked on this bright, entertaining Limey detective show set in 1890’s Canada … what, pray tell, is your primary dysfunction? Yannick Bisson remains terrific as Det. Murdoch, the Great White North’s gifted and energetic man of science whose fondness for then-new techniques of forensic analysis keeps him at odds with the dim-witted local police. Our favorite story this season includes a visit from Thomas Edison (Jr.), in a tale about murder most foul during Toronto’s first-ever showing of a movie – with sound! Some of the best TV we know.

Robot Chicken’s first DC Comics Special collected the “best” of their low-rent stop-motion animated superhero tales, and remains one of our most-watched videos when we’re in the mood for something silly. This one tops it by highlighting all the dark super-villains, including Sexx Luthor with sexy little Sarah Hyland from “Modern Family” as the voice of Lena Luthor, Lex’s (Alfred Molina) daughter. Paul “Pee Wee Herman” Reubens makes a great Riddler, but Nathan “Firefly” Fillion steals the show as Black Adam. You know you want it.

Filmmaker/Artist Morrison may be the most inventive and important modern-day artist you never heard of, the prestigious MOMA holding no less than 8 of his works in their permanent collection. Among other things, he delights in taking decrepit strips of found-film and devising a contextual framework around them, creating something original that will haunt you for days. This 5-disc set includes his award-winning “Decasia” (2002), a collaboration with composer Michael Gordon that defies categorization, but clearly demonstrates the transcendent nature of human creativity.

The video that movie-junkies have been asking Santa for: a 4-disc, Diamond Anniversary Blu-Ray treatment of this perennial Irving Berlin favorite starring Bing Crosby, Danny Kaye, Vera-Ellen and Rosemary Clooney. Resplendent with every bonus goodie you could imagine – including an audio CD with 8 never-before released tracks! – to say more should be unnecessary. But we get paid by the word, so: Buy this or you’ll make Rudolph cry.