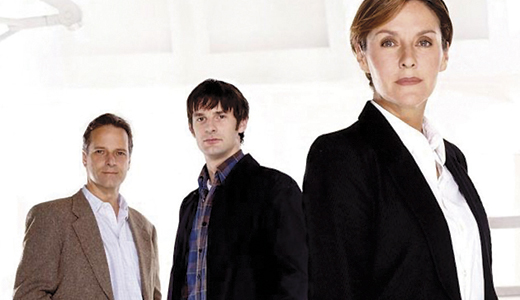 For our money, this long-running forensic cop show is the best on the tube. Amanda Burton, famous in Britain for her role as Commander Blake in the popular “The Commander” TV movies, is Dr. Sam Ryan, a pathologist teaching at Cambridge who assists the police with their investigations. Her first case involves a drowned child whose body shows signs of abuse – the same abuse she saw in an unrelated case, as pointed out by a prison inmate. We’re not squeamish, but you’ll never look at another stiff on “CSI” without a tear. Powerful.

Around 2004 “Silent Witness” moved away from Dr. Sam Ryan and towards Dr. Nikki Alexander, played by the very sexy Emilia Fox, who was such a hoot in “Randall & Hopkirk (deceased).” The stories also became racier and less lab-bound, with plots that included disfiguring poisons, sex tapes, blackmail, Zionism, hate crime, abortion, etc., while never losing their intense focus on the human toll – and the many insults that the body can endure before expiring. A marginally different “Witness” from the premiere season, but not one whit less dramatic or satisfying.

Cheap-assed CGI “E.T.” ripoff, not worthy of holding Drew Barrymore’s nappy. Do your kids a favor and get the real thing.

A raunchy Jason Segel/Cameron Diaz old-married-couple comedy that died at the box office, but makes a passable night on the couch. To spice up their love-life, they film a 3-hour home video enacting The Joy Of Sex, which quickly goes missing, leading to a frantic search lest neighbors see it. Or bosses. Or the PTA, their children, priest, mailman, etc. Cameron is delicious, of course, teasing and titillating, while Jason is, well, Jason. We’ve seen worse, but don’t hold your breath for a sequel.

SLEEPING WITH THE FISHES

A fun and funny little indie Latino-family comedy. Gina “Jane the Virgin” Rodriguez has just buried her no-good dead-beat husband; her life is in shambles and she’s up to her eyeballs in debt. That’s when Mama calls her home for an aunt’s funeral and she must brace herself for the requisite buttinsky cross-examination and waves of personal advice from all her wacky relatives. What else can she do but smile and carry on? Very nicely done; Rodriguez is a charmer.

This is the stupidest idea for a movie we ever heard: In a frozen post-apocalyptic nightmare, all of humanity now lives on one ginormous super-train. And what do they do all day? Why they fight over who gets to DRIVE! That being said, this is actually a lot of dark fun, with Chris “Captain America” Evans as the central good-guy who wants to move from baggage to coach, along with a carload of cameos including Ed Harris, John Hurt, Tilda Swinton, Jamie Bell, Octavia Spencer and Alison “Scot Pilgrim” Pill. A bleak, intriguing, exciting look at Man’s future from Korea’s Bong Joon-ho, who brought us 2006’s excellent “The Host.”

Even if you’re not a fan of anime, you really need to see this. In a world where children are no longer born and people no longer die despite their injuries, a young “gravekeeper” – one of the few who can give the suffering a form of peace – goes looking for the cause. Everyone believes that its because God has abandoned them, but she and a small band of companions suspect that something else is at fault. Despite all the emotional darkness, the visuals glow with a surprising innocence, and the characters are undeniably beautiful and childlike. Truly absorbing; based on a 9-volume-and-counting YA novel series.

Sadly, an entire generation of Americans has grown up without experiencing “The Red Skelton Show”, arguably our most intimate TV achievement. With much of it lost due to the nascent and fragile recording techniques of the day – and Red’s refusal to syndicate reruns – it is with great pride that we announce this 10-disc collection of gentle comedy, most of it never before on home video. Contains 91 episodes on 10 discs featuring Red as Clem Kadiddlehopper, Cauliflower McPugg, Willie Lump Lump, Gertrude and Heathcliff, and Freddie The Freeloader, with guest stars ranging from Jackie Gleason, to a young Johnny Carson, to John Wayne. A Master’s course in entertainment.

Gorgeous Katie Cassidy (“Supernatural”, “Arrow”) stars as a woman with multiple personalities who agrees to undergo treatment in a radical machine that removes the extra personalities one at a time. But, uh, how does it know which one is really “her”? Based on a graphic novel with all the requisite noise, flash, special effects, and a really cool skeletal onesie; watch for Michelle Trachtenberg, Gina Gershon, Sasha Grey, and a cameo by Eliza Dushku, among others.

While we’ve yet to see a truly complete collection of Price’s best films, this line is pretty good. Includes the excellent William Castle entry, “House on Haunted Hill”, the ensemble pieces “Comedy Of Terrrors” and “The Raven” (both featuring Peter Lorre and Boris Karloff), sequels “Return Of the Fly” and “Dr. Phibes Rises Again,” and the groundbreaking zombie nightmare, “The Last Man On Earth,” based on Richard Matheson’s “I Am Legend.” Seven terrific films on four beautiful Blu-Rays, with a nice assortment of bonus goodies, all from the man who knew that it’s as much fun to scare as to be scared. Happy Halloween.

What a HOOT! A doc on the touring company of Terrence McNally’s gay-Jesus passion play. Originally planned for a furtive 6 night run, the play attracted worldwide press – and the outrage of the Religious Right – to become a loving, celebratory 8-year odyssey for all involved. We wish it included the entire play, but you get enough snippets to see how civil rights, HIV and church-state collusion are treated both on-stage and back-stage, and then entertained by parallel scenes of red-faced asshole protesters and their softspoken opposites outside the performance. Gangs of fun.

KUNDO: AGE OF THE RAMPANT

On one hand this is just another of the flood of Korean-made imitation-Chinese/Japanese Kung Fu movies that have dashed upon our shores of late. But on the other hand, there is an undeniable Shaw Brothers vibe here that permeates througout, from the deliberately cheezy music, to the wonderful and completely over-the-top villain, to the demented Sergio-Leone-ish sets. Stars Jung-woo Ha as Dolmuchi, the Good Guy, and flawless little Ye-ri Han as Gok-ji, the Girl. We liked this waaaay too much.

An award-winning gay drama from Venezuela starring Guillermo García as a photographer who revels in the vacuous excesses of the fashion industry until an accident places his partner, a successful surgeon, in a coma. At this worst possible time he also must take care of his insecure teenage son, who arrives from Spain, unaware that his dad is gay. An exceptional soundtrack drives this admittedly melodramatic tale of family and its power to heal all wounds.

Wow, this thing blew us away (no pun intended)! A Japanese doc on the 2011 earthquake/tsunami damage at the Fukushima Daiichi nuclear power facility, focusing on those unfortunate wretches living nearby. The plight of these “nuclear refugees” is literally beyond belief: a living nightmare far more grisly than anything dreamed up by Hollywood, and far worse than what’s been officially reported by the press. Music-free, the camera quietly records their nightmare existence as wretched survivors shamble about, dazed and outraged that their nation has built its future on the very technology that violated Hiroshima and Nagasaki. Will make you angry.

A quintet of 20-something high-schoolers break into an Acme Brand Abandoned Mental Hospital that even Wile E. Coyote would have known to stay out of. All manner of nastiness takes place. The End. Yet despite the fact that it’s an (ugh) found-footage film, we actually kinda liked this spunky little no-budget film-festival favorite, in no small part due to the introduction of Kim Kleeminchen as “Rosie Delgado”, who largely carries the film – and wrote the upcoming sequel. Check it out.

SUPERMENSCH: THE LEGEND OF SHEP GORDON

Mike “Austin Powers” Myers brings us this lively look at Gorden, the penultimate Hollywood insider and creator of such fun cinematic crap as “They Live” (1988), “The People Under the Stairs” (1991) and “Prince of Darkness” (1987). An “accidental” music arranger who befriended everyone from Janis to Jimi and managed acts from Alice Cooper to Pink Floyd – and most recently a list of celebrity chefs – Gordon has lived as interesting a private life as his very public persona. The best part is that Myers gives each of the people in Gordon’s life ample time to both praise and broil the man for his famously hedonistic lifestyle (recently tamed by a conversion to Buddhism). Very entertaining.

Students of Chinese history will tell you that the Feast at Hong Gate was a pivotal moment, unlike anything experienced anywhere else on the globe. Essentially ending the Qin dynasty, it lead to centuries of war, creating the China we know today. Filmed many times, this offers the famous tale of Liu Bang and Xiang Yu from the perspective of Liu’s deathbed, looking back on his choices repeatedly, each time from a slightly different perspective, arguing that what he did was inevitable – however painful – and that those in power have manipulated history for their own ends. Exciting historical martial-melodrama at its best.

Known as “Rejseholdet” in its native Denmark, this international Emmy-winning cop drama follows the exploits of a mobile task force dispatched to assist local cops with their toughest cases. Inspired by a real-world tech squad, the focus is on the men and women who dedicate their lives to wallowing in the foulest acts of human savagery to find the truth, knowing full well that they may be harmed by the experience. Charlotte “The Killing” Fich stars as the newly-assigned lead, desperate to forge a team out of fiery Mads “Casino Royale” Mikkelsen, Lars “Borgen” Brygmann and Jens Peter Sørensen. Has a very 70’s vibe: gritty, realistic, willing to take chances, and filled with real people with real baggage. One of the very best TV series’ we’ve ever stumbled across.

The long-suffering Colorado mining community of Naturita is chosen, once again, for a major new uranium processing mill, despite the town’s decades of health problems and poisoned land, the result of past mill owners who abused the locals’ trust, made millions, then split. Before the mill can proceed, however, a nearby resort-town environmental group raises alarms about the potential for further damage and – it must be said – their own loss of tony resort business. While this interesting doc looks at both sides of the issue fairly, it’s hard to side with an international conglomerate that seems all too ready to promise riches, despite a long history of dirty deals.