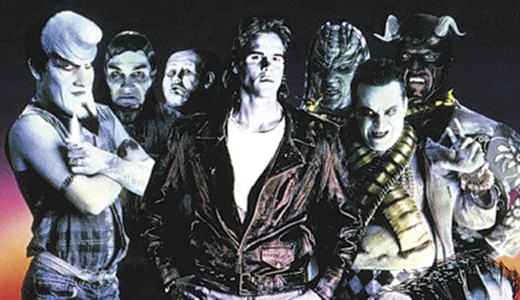 After the runaway success of “Hellraiser,” horror author and film director Clive Barker fought for control of this flick, leading to one very entertaining mess of a movie, a staple of ‘90s cable TV. It stars Craig “One Tree Hill” Sheffer and, oddly, director David Cronenberg: Sheffer is wanted for murder, all the while turning into a monster, while serial killer/shrink Cronenberg follows, determined to destroy him and his destination, the fabled city of monsters called Midian. Finally available in an extended Director’s Cut that is substantially different in both tone and plot from the original. We liked it.

Look up “Drive-In Crap” in the dictionary and you’ll find this wonderfully icky icon of the ‘70s. A downed power line sends millions of slimy man-eating earthworms slithering after a group of hapless humans. Stars Don Scardino, who now directs “Two Broke Girls,” and soap star Patricia Pearcy, who takes a worm bath (not a great date flick). Now available in a Blu-Ray Collector’s Edition with fun new bonus goodies.

A STAR FOR CHRISTMAS

Blistering Briana Evigan (“Step Up 2: The Streets”) is a very busy small-town girl with a successful cupcake business. In walks hunky Corey “Immortals” Sevier and it’s PG-rated love at first sight. But the man has a dark, disturbing secret: He’s really a movie star in town to shoot a picture. Oh! The trials and tribulations of small-town love! A squeaky clean Christmas romcom with an extremely attractive cast that includes Baywatch Babe Brooke Burns, made for the ultraconservative ION Channel.

Courtroom dramas normally put us to sleep, which is why this one was such a surprise. Rather than focus on the churlish tirades of asshole lawyers (or is that redundant?), this uses the impending court proceedings as scaffolding to replay the crime from different points of view. Brilliantly written and starring a host of Britain’s most popular actors, we can’t imagine a more addictive show. Watch for Sean “Game of Thrones” Bean in a dress(!), “Doctor Who”s Christopher Eccleston and Peter Capaldi, and Andy “Gollum” Serkis, among others.

We could watch Keira Knightley read the phone book, so it’s no surprise that we liked this little indie treat starring KK and scruffy Mark Ruffalo. They are lovelorn souls in NYC (yeah, like she couldn’t have any man she wanted): she a songwriter and he a down-on-his-luck record promoter. They, of course, find each other and have a wonderful love affair. Eventually. What’s really surprising here is that KK does all her own singing – and she’s not bad. The supporting cast includes CeeLo Green and Adam Levine, who both sing, plus Mos Def, Catherine Keener, and Hailee Steinfeld. The “R” rating is asinine.

Another dark, wretched Cormac McCarthy novel, turned to film by writer/director/co-star James Franco. Lonely Appalachian psycho Scott “As I Lay Dying” Haze slowly degenerates into a ruthless, starving cave dweller, circa 1960. The End. What? You want a happy ending? Go watch a Transformers movie! This is a torturous sojourn into the heart of depravity — a movie for adults who want their entertainment to take them to dismal and dangerous places, to leave them depressed and emotionally spent. Not our cuppa tea, but very effecting.

James Franco and Kate Hudson are blissfully renovating their place in London when the guy downstairs gets murdered. Then they learn he stuffed a fortune in cash into his ceiling! “Uh, honey, hand me a crowbar, will ya please?” You think this is gonna end well? A pedantic little “killer on the loose” crime thriller with a strong, likable cast.

“Ex-Lesbian” Jill (Jen McPherson, in a breakout role) decides to prove to former girlfriend Michelle Ehlen (“Co-Ed Confidential”) that she is now committed to driving stick. But is she really? Meanwhile, their hetero friends, David and Lola, are having their own problems – resisting the charms of sexy bi-Brazilian Jose’ — which McPherson recognizes as a possible solution to her own dilemma. Love never listens to our brains, does it?

WKRP IN CINCINNATI: THE COMPLETE SERIES

AM radio was in decline by the late ‘70s, relegating once-proud stations and DJs to the backwaters of the radio dial. This anarchic, upbeat sitcom celebrated AM’s last gasp and the many losers who sat alone, playing records, wondering if anyone was listening. Gary Sandy leads the charge as the new program director who tosses out book readings and mortuary ads in favor of rock ’n’ roll, reinventing drug-addled Howard Hesseman as “Dr. Johnny Fever.” Tim Reid’s career began as soul-brother “Venus Flytrap,” and bombshell Loni Anderson became a decade’s blonde fantasy. Long delayed by squabbles over music rights, this is the most welcome video release in recent memory. Can you dig it, fellow babies?

Yes, this is the same Miss Marple series we’ve been crowing about for the last year, so why are we bringing up Volume One again? Because they’ve finally got their Limey act together and are releasing them on Blu-Ray! A very welcome return for AC’s signature tweet-clad spinster-sleuth, circa 1950, as portrayed by Joan Hickson in her most popular role. Our favorite in this set is “The Body in the Library”, with an enlightened look at long-ago lesbian love, and a clever plot twist during the reveal. Simply wonderful storytelling.

The best film about authoritarianism and media-driven public overreaction we’ve ever seen. Conner “Falling Skies” Jessup is a shy, likeable teen, dealing with all the usual highschool drama, including being smitten by Alexia “Jack Reacher” Fast. Unfortunately, that wins him a beating by her jock boyfriend. Angry, he goes online and posts an enraged rant. Moments later, the cops kick in his door, find his dad’s stash of guns, and toss him in prison. The ensuing media storm brands the boy a would-be mass-murderer. Scary, real and very disturbing on every level, yet never falling into cliché’. Highly recommended.

While the Complete Series was originally released to Blu-Ray back in November of 2013, this special Blu-Ray gift set deliciously expands on it, adding a Los Pollos Hermanos chef’s apron, a matchbook-shaped “Better Call Saul” flash drive, a new 2-hour behind-the-scenes doc, 55 HOURS of special features, and several other kitschy little goodies, all packed in a plastic oil-drum shaped “money barrel” just for grins. Pressed for cash? Series-only sets run about $130 for Blu-Ray or $95 DVD. If you need any further information, you are clearly on drugs.

Our latest long-haired infatuation, Alexia Fast (“Jack Reacher”), plays an innocent college student whose smokin’ dormmate (Alexis Knapp) keeps dragging her to wild frat parties, while the camera records it all from Fast’s POV. Somewhere in all this she becomes possessed by something supernatural, and only the church and her crazed grandma, Lin Shaye (“A Nightmare on Elm Street”), can save her. Problem is: The girl’s got the hots for her priest, and Grandma is about two fries short of a Happy Meal, making any cure far scarier than the demon inside. We’ve seen worse.

Ian “Pillars Of The Earth” McShane returns as the titular antique dealer/antihero in this rakish BBC series that we can’t get enough of. His only two talents are (1) getting into trouble, and (2) outfoxing those who con the innocent, so it’s a nice switch to see him saved by Lady Jane (“Downton Abbey”s Phyllis Logan) after he, himsef, is swindled by a sweet, old codger. Series regulars Dudley Sutton and Chris Jury are as hilarious as ever as Tink and Eric, while the great Joanna “AbFab” Lumley guest stars as a provocative widow. Too much fun.

Ed “Downton Abbey” Speleers and Will “Son of Rambow” Poulter are likeable nogoodnicks who lead a gang of friends into trouble in this crime caper inspired by real events. They run a credt-card scam that sets them afoul of a sadistic gangster, and only a multi-million dollar diamond heist will get him off their backs. Part caper, part teen party flick, it is made infinitely watchable by the presence of stunning blonde hottie Emma Rigby from TV’s “Once Upon a Time in Wonderland”, who shines throughout.

This flick is a mixed bag: On one hand the plot device is very original, but on the other the filmmakers don’t really take advantage of all it has to offer. It seems that centuries ago a Chinese emperor invented a poison that kills by overloading the victim with pleasure. It disappears for centuries, finally popping up in Hong Kong, destroying the mind of a young woman who becomes a crazed dominatrix-murderer while evil baddies close in. The attractive cast includes statuesque French star Frédérique Bel, Carrie Ng from 1994’s underrated “The Lovers”, and Carole “On/Off” Brana.

Brenda “Pride & Prejudice” Blethyn plays a somewhat distracted force of nature as the titular English Inspector of this classy BBC detective series . Her disordered life keeps getting in the way of solving all those pesky – and often extremely gory – murders and whatnot, and her abrasive manner doesn’t endear her to anyone (been there). But she gets results, and that’s what matters. This set starts with a puzzler about the connection between a saintly woman knifed on a train, and an alcoholic prostitute murdered at the hostel where the woman worked. Ever so entertaining.