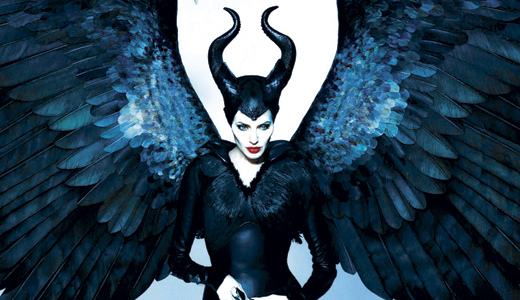 (Dear Readers: Dave here. I’m filling in for editor Bill this week while he winds his way through the legal system, accused of abusing a popular men’s magazine. Enjoy.)

At first glance, Dwayne “The Former Rock” Johnson may seem a bit old for the title role, but this takes place after Herc’s legendary 12 Labors and the loss of his family. Now a mere mercenary, he bands with six other lost souls in a pointless existence until roused by king John Hurt, who hires them to forge an army, lest the world fall to a butcherous warlord. No mythical beasties, sadly (save in an opening sequence), this is a more introspective demigod, learning that legends have the power to change the world in ways that mere men cannot. With Ian McShane, Rufus Sewell, Ingrid Bolso Berdal and Joseph Fiennes.

Walt Disney wanted the dark queen/sorceress who doomed Snow White to be the embodiment of all that was cold and unholy: she was simply Evil. But his heirs, always panning for new profit from his legacy, reinvent her here as a fierce warrior, turned dark by war, anger and loss: What she does is wrong, but justifiable. Sorry, Mouse, that morality just doesn’t fly, but Angelina Jolie gives it her all in a very entertaining, if misguided, task that might have found a better audience among adults with a PG-13 or even R-rated plot. Elle Fanning is great as Aurora/Sleeping Beauty, with help from Sharlto Copley, Lesley Manville, Juno Temple, et al.

This immortal David Suchet series, arguably the longest-running, most popular literary adaptation in entertainment history, finally comes to a lavish end after 24 years on the telly. And what better way to close than with “Curtains,” in which the fussy Belgian sleuth, now deathly ill and grieving the loss of wife Bella, asks old friend Captain Hastings (Hugh Fraser) to help him trap a serial killer — who has Poirot on his list — in the country manor house of Styles Court, where they first met some 30 years prior. Exceptional TV.

A unique lights-on Chinese horror from New Zealand. That’s where a young Chinese immigrant (Yoson An), who loves a beautiful native girl (Rebekah Palmer), is forced by his possessive mother to accept a traditional silent Chinese “spirit bride” (Fiona Feng) selected by scary matchmaker Geeling Ng (from the old David Bowie “China Girl” music video). But when her “marriage” is threatened, the silent bride reveals her unholy true nature. And the price for his betrayal? She will have his soul for all eternity.

If you seek a modern, exploitive anime experience — huge-breasted warrior women, lots of tight white panties and sexually insatiable lesbian zombie-killers — then this is the Holy Grail. After “the outbreak,” a group of high-school girls and their massively mammaried school nurse must battle lawless gangs of classmates and megalomaniacal teachers to reach the supposed safety of an elementary school. Bloody, comic, stupid, lively, exciting and heavy with co-ed showers, thongs, tank tops and all manner of female nudity — though never a hint of pubic hair. (I had Bill check closely before his arrest.)

We find it embarrassing that there exists an entire generation of Americans who don’t know the name Phil Silvers. One of our most legendary comic performers, his character of Sgt. Ernie Bilko, the con-man leader of a dedicated squad of goombas, saps and partners-in-crime spawned countless imitations, including “McHale’s Navy” and “Top Cat.” Here we proudly announce this set of all 143 drop-dead funny episodes featuring Borscht Belt greats Harvey Lembeck, Allan Melvin, Billy Sands and Joe E. Ross, with Paul Ford as his hapless colonel, plus outstanding bonus goodies including cast commercials, commentaries, interviews and the once-lost “audition show.” The very definition of classic TV and three-time consecutive winner of the Primetime Emmy, finally available for just pennies an episode.

THE ONE I LOVE

There’s absolutely no reason that this unique adult conversation should work, but it does — and brilliantly so. Mark “The League” Duplass and Elisabeth “Mad Men” Moss are a married couple who ask therapist Ted “Cheers” Danson for help. He prescribes a visit to a secluded vacation spot — but what awaits them there is too good to spoil here. Let’s just say that they finally get a chance to really know each other — and themselves — in all their petty, wart-covered, childish glory. One of those movies you’ll watch a second and third time, then talk about for weeks. Highly recommended.

THE TAKING OF DEBORAH LOGAN

A.k.a. “The Taking,” this lights-on supernatural horror first succeeded in giving us the willies before running us completely out of the room. Anne “Hart of Dixie” Ramsay is a Ph.D. candidate studying an Alzheimer’s patient (soap star Jill Larson) and her daughter/caregiver, lovely New Zealand native Michelle Ang (“Xena: Warrior Princess”). But it soon becomes clear that it is not a mere disease that torments her. A grotesque look at both a real-world horror and one dreamed up by truly sick movie-writers Gavin Heffernan and Adam Robitel.

Shauna “Hemlock Grove” MacDonald and Christine “Lost Girl” Horne are polar opposites — one a serial lesbian with a history of bad relationships, the other a lawyer with no time for love — who share a complicated past. Then Shauna meets Christine’s beautiful, young-at-heart widowed mother, played by Kate Trotter (“Covert Affairs”), and Christine can only watch in horror as the relationship between the two becomes intimate. A wildly popular, award-winning look at love, written and directed by the two stars. Exceptionally good.

This trio of tales tackles a dark subject – the physical and emotional abuse of girls and young women – with even darker ghostly retribution. An on-the-cheap anthology starring no one you ever heard of, it succeeds by sticking to modern literary inspirations including Edgar Allan Poe and “Tales From The Crypt.” In the best segment, “Theta Pi’s Never Die”, a quiet student is prodded to join her mother’s old sorority. But the bitchy sisters betray her, not counting on a mystical object’s potential for retribution. Good, solid fright tales from writers/directors Neal Fischer and Del Harvey that needed only a bit more humor to make them great.

This star-heavy modern-day oater, set on the Mexico-US border, pits illegal alien Michael Pena against Ed Harris, Aden “I, Frankenstein” Young, and a host of redneck assholes when Harris’ wife, Amy Madigan, is assaulted and killed during Pena’s border crossing. Eva Longoria stands out, as always, but this is Harris’ movie from beginning to end; a surprising, moving and very intelligent flick, ripped from today’s headlines, with an ending that will leave you breathless. Highly recommended.

You read that right! The entire 8-season run of Nickelodeon’s finest creation on 16 discs for a steal of a price! Arnold, of course, is the big-city 4th-grader with an inexplicably football-shaped head who lives the good life, surrounded by loving friends and family. And dogs. And bullies. And girls. And all the other things that an average kid must learn to navigate thru, surviving as much on his good attitude, friendliness, and simple ideals as his nascent intelligence. Infinitely likeable, we truly believe that this show has helped shape a generation for the better. Makes a great gift.

If you haven’t already heard of this Kickstarter festival favorite, have we gotta film for you! The premise: A TV reality show needs a rating boost, so it invites a bunch of loser not-so-superheroes into the studio. The “heroes” – which include a crime-fighting single mom with a bitchy teen daughter, a spoiled rich girl whose daddy buys her lots of neat gun-toys, and a pair of no-longer-cute former teen-boy crimefighters – are desperate for good press and a much-needed career boost. Pee-yourself funny at times (the rapid-fire alliterative narration is almost a movie unto itself), with nasty jabs at reality TV and celebrity culture, gay in-jokes, and the ever-present terrors of Spandex. Don’t miss this!

This wonderful old stop-motion Christmas chestnut just keeps getting better with age. Originally created, at least in part, to promote General Electric’s new line of long-lasting one-burns-out-the- rest-stay-lit Christmas lights, it quickly rose above such consumerist roots to become the de-facto symbol of the American holiday season. Now available with a slick foil case, nicely cleaned up visuals, and the best bonus goodies we’ve ever seen, including singlalongs with Sam the Snowman, a kid-friendly behind-the-scenes look with 50 little-known facts about the show, and our favorite: A fun tutorial on how to draw Rudolph and all his friends! Stars the voice of first- time actress Billie Mae Richards (who later voiced Billy Connor in 1967’s “Spiderman” animated series), as Rudolph, plus Burl Ives and a host of voiceover greats. A must-own.