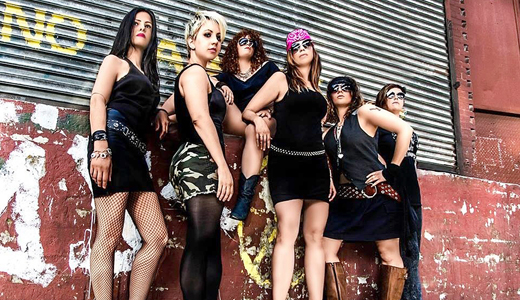 Guns N’ Roses were the last of a breed. You know, the narcissistic, unapologetic party animals that couldn’t play enough self-indulgent guitar solos or have any more broken give-a-shits. Man, those were the days. On Friday night, NYC’s The Rocket Queens — an all-female Guns N’ Roses cover band — will keep the spirit alive at The New Vintage, but before they do, we asked Lily Maase, the band’s founder and guitarist/Slash, to break down her five favorite GnR songs.

“A bit of an obvious choice, but important because it’s what got me into Guns N’ Roses in the first place, and is also a really big part of what got me excited about the guitar. Why? Crossover radio. Even my soft-rock-loving, scrunchie-wearing, circa-1980s mom loved this song, which meant it had a sort of ‘sanctioned’ place in my early childhood. The moment I heard that intro I was hooked for life — I’ve never wanted to do anything but play the guitar ever since. I owe this song — and Slash — a great debt of gratitude for turning me on to the instrument when I was 7 years old, and playing the solo at the end is always a little bit like going to church.”

“To some, this song represents the extremes of Axl Rose’s excess and ego at the peak of the band’s success. I mean, who else would film an epic music video apparently just prove that they have ready access to supermodels, aquatic mammals, houses in Beverly Hills and a private aircraft carrier? The video begins with a lofty definition of the word ‘Estranged’ and ends with Axl snuggling a dolphin, which is about as obscure as you can get when it comes to music videos. But all that aside, this song is a rare glimpse into Axl’s introspective side, and the lead guitar work is just spectacular. The build into the solo at the end still just kills me every time I hear it.”

“One thing a lot of casual Guns N’ Roses fans might not know is that Izzy Stradlin, the band’s most mysterious and unheralded member, actually wrote or co-wrote a majority of their early material. Lyrically, Dust N’ Bones is probably his finest moment — it’s a true anthem for anyone who’s had to leave everything behind and strike out on their own. This one resonates personally for me at a lot of levels, and Izzy really hits the nail on the head with the closing lyric: ‘Time’s short, your life’s your own/And in the end we are just dust n’ bones.’ The Rocket Queens have some stories about this song and our early time together on the road, which you’ll hear if you make it out to the show. We really do this one up, and it’s a moment in the set that feels like something we’ve made our own.”

“For me, this song is all about the riff.  From beginning to end, everything about ‘Nightrain’ is a lesson in badass, and the guitar solo and vocals at the end are nothing short of epic. It’s also an amazing snapshot into the early lives of the band: When they were in their early days in Los Angeles, the fellas in GnR all lived together in their rehearsal space. They shared a bunk bed in shifts when they weren’t practicing, and were too broke to drink anything fancier than drugstore booze. ‘Nightrain’ was apparently their preferred cheap cocktail of choice, and writing a song about what amounts to a late-’80s version of Four Loko is exactly what Guns N’ Roses does best — they make being a homeless, broke, scraggly, devil-may-care street urchin seem impossibly, achingly freaking cool.”

“I’m sorry, you just have to put this one at the top. This song is probably the best introduction into mainstream media that a rock band has ever had. The video captures the band and the spirit of the times perfectly, and the song captures the spirit of the video so perfectly that the video feels almost superfluous. The introduction is like a thesis statement for sleaze rock — by the time Axl’s vocals come in, you know exactly what this band is about, and everything they’ve done since then is just an expansion on those first 30 seconds of ‘Appetite for Destruction.’ If you grew up playing the electric guitar and didn’t learn the opening riff at one point or another, then I’m sorry — you didn’t grow up playing the electric guitar. Or you hate fun. Because this song just flat-out