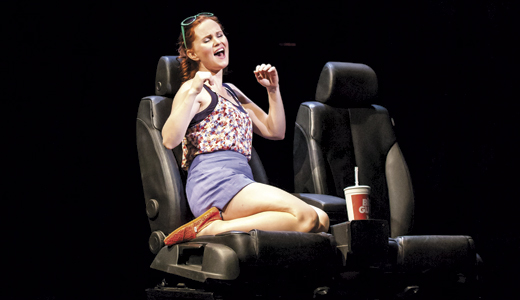 “The Last Five Years,” which premiered last week at Actors Theatre of Louisville as part of the Brown-Forman Series, is a breakup narrative with a twist. As a promotional blurb sums it up, the narratives move in opposite directions. The guy in this doomed relationship is a brilliant novelist named Jamie (Jed Resnick) who tells his tale from beginning to end. The gal, a struggling actress named Cathy (Autumn Hurlbert), tells her story from end to beginning.

The concept sounds like one of those empty formal experiments that’s more interesting on the page than on the stage. But this production, directed with a very sure hand by Meredith McDonough, has enough wily wit and emotional depth to make for a moving, thought-provoking night of theater. And though playwright Jason Robert Brown uses the most economical of forces (there are only two characters), Resnick and Hurlbert are compelling performers who easily commanded the audience’s attention on opening night.

“The Last Five Years” is a musical (Brown won Tony Awards for the Broadway musicals “Parade” and “The Bridges of Madison County”). The story is told via alternating songs that run the stylistic gamut from confessional pop to Catskills-style klezmer (Jamie is a decidedly Jewish character who frequently mugs and jokes like a resort comedian). The lyrics are smart, funny, moving and sometimes darkly candid.

A clever, efficient turntable set (Dane Laffrey), entertaining costumes (Paloma Young), evocative lighting (Paul Toben) and very effective media work (Philip Allgeier) complement the action. But of course, it’s the music and action that carry the production. A crackerjack ensemble (Felix Borges, Yoonie Choi, Darren Lucas, Chris Rayis, Paul Reich and Ray Weaver) under the direction of Brian J. Nash does a superb job of accompanying the principals — and the principals do a spectacular job with these songs. Hurlbert starts the proceedings with a brokenhearted, end-of-the-relationship lament, then has the formidable task of moving back in time through the phases of the breakup and through the sometimes hopeful, sometimes crumbling phases of her acting career (her audition sequence and her account of working summer stock in Ohio are brilliant highlights of the evening).  She tackles her material with a big, brassy theatrical voice and intensity of purpose.

And the acting is excellent. Resnick has a boyish facial mobility and a chameleon-like ability to morph from a romantic idealist to a sleazy, narcissistic lounge lizard in a matter of moments (his performance of “The Schmuel Song,” a moving tale of love, is another highlight of the evening).

It must be said that the story itself is rooted in conventional stereotypes. Jamie is a narcissistic, highly successful man, whose need to be “in love” has little or nothing to do with his partner. And Cathy is a less successful woman whose sense of self hardly exists outside her relationship with a man. But this time-twisting narrative brings new life to the convention. Except for a marriage scene in the middle, these two characters never directly interact — they’re just props in each other’s lives. And the jarring juxtapositions of joy and sorrow as we move back and forth in time are stunningly effective.

“The Last Five Years” runs through October 26 at Actors Theatre of Louisville, 316 W. Main St. For information, call 584-1205 or connect to www.actorstheatre.org.