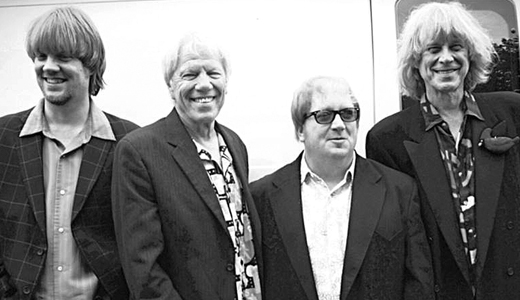 This Friday, NRBQ returns to Louisville, the hometown of founding members Terry Adams and the late Steve Ferguson. For newcomers, NRBQ stands for New Rhythm & Blues Quartet (originally Quintet). Adams was in grand form during a recent telephone interview, covering topics ranging from the formation of the band in 1967 to its current lineup and album, “Brass Tacks,” with side trips to the world of Thelonious Monk and more. The new record features current members Adams (keyboards, vocals), Scott Ligon (guitar, vocals), Casey McDonough (bass, vocals) and Conrad Choucroun (drums). “Brass Tacks” captures the wide-ranging spirit of classic NRBQ, with the music showing influences from country to early rock ‘n’ roll to jazz, all part of what makes NRBQ what many call “the world’s greatest bar band.” In a way, the interview was akin to a concert, with subject matter changing on a dime, but eventually coming back around after fascinating side trips.

In 2007, Adams temporarily changed the name NRBQ to The Terry Adams Rock & Roll Quartet. “I thought it would take some pressure off the new guys. That was a temporary name so we could get some experience behind us, but I always knew what I was doing with NRBQ,” he said. “The drummer’s gotta understand what it means to play with your whole body, not from your head, but below the belt — too. So it’s important for NRBQ’s drummers to be able to swing and think in those kinds of terms. It’s really about playing together. We have a way of feeling rhythm that might be different from other bands. Being able to shift gears many times isn’t that big of a shift to us, but to be able to play different types of rhythms. I’m a rhythm player myself. I’m sort of like the rhythm guitarist in NRBQ, even though I play clavinet, but it’s a stringed instrument — I’ve always been a part of the rhythm section. And the guitarist is one of the best musicians I’ve ever met — he can sing and play anything from our catalog, from the beginning to things we’ve never done, and on into the future.”

Adams then briefly became the interviewer: “Did you get the new record?” I responded, “What grabbed me was that ­­— and this may be old news on your side — it sounded like NRBQ, I wasn’t sure what to expect, not having heard the new lineup before, and I was charmed.” Adams replied, “I can’t help but sound like NRBQ. I don’t ask these guys to sound like anyone else. If they did, I’d run from it. I’m glad that you felt it.”

A question regarding finding musicians who could play the wide range of influences, from the jazz of Thelonious Monk and Sun Ra to the rockabilly of Eddie Cochran and Carl Perkins, led to a brief history of the band. “Starting off, there was a gradual process,” Adams said. “I had a wider view of music than anybody I’d met. Steve Ferguson came the closest. When he joined me, we took the band on the road. It’s about getting it into [the musicians’] heads as a way of thinking and living, being open-minded about music. I think that categories, being narrow-minded about what kind of place you want music to be in, is a waste of time, a waste of life for me. I was born in Louisville, but I’m from everywhere. It’s going to be a lot of fun to play in Louisville again.”

LEO asked if the live show will be as widely eclectic as the record, to which Adams responded, “More so, that’s for sure. It’s just the way I’ve always listened to music. As a teenager, driving in my car, we’d flip the radio back and forth from WLOU [R&B] to WTMT [country]. I can remember Steve, in particular with me, we would hear something, stop the car and turn around, and if they didn’t identify something, we’d drive right up to the station and demand that the DJ come out and tell us what it was. The live performance — anything goes.”

Adams still feels a home connection with Louisville, and he spoke of how he studied composition with Don Murray, whom he cited as a great teacher. “There’s a special thing about Louisville, great piano players such as Meade Lux Lewis; [singer] Helen Humes, [vibraphonist] Lionel Hampton, [saxophonist] Marshall Allen, Jimmy Logsdon — that’s a story to itself, about ‘Rocket in My Pocket’ coming out of Louisville.”

He spoke of having to leave Louisville as an 18-year-old, feeling his music wasn’t appreciated, and how he went to New York and sought out fabled artists like Moondog and Monk. “But my heart has changed now,” he said. “There’s something special about the place, and this time in particular.”