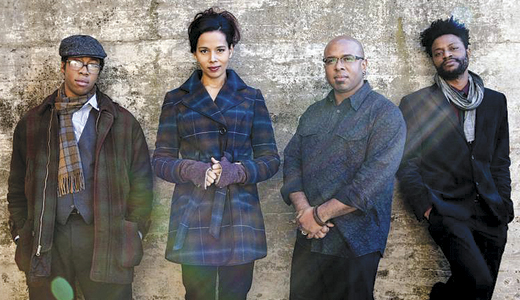 <music>
Wednesday, Oct. 22
‘GMO OMG’
Dreamland
810 Market St.
rainbowblossom.com
$5; 6 p.m. doors; 7 p.m. screening
Get your ticket for this powerful documentary at non-GMO sponsor Rainbow Blossom, free for Rainbow Reward members, only $5 for non-members. I can guarantee there’ll be no Frankenfoods served up during the snack and social hour starting at 6 p.m. The award-winning documentary — which questions whether we can escape our genetically modified food system — screens at 7 p.m. Eighty percent of all processed foods we consume contain GMOs, so it’s an issue that not only touches us all, but … well,  if you believe you are what you eat, you’re going to want to see this film. Director Jeremy Seifert travels from his family’s table to Haiti, Paris, Norway and Monsanto’s headquarters to answer the film’s driving question. —Laura Snyder

<film>
Thursday, OCT. 23
Agent Orange
Zanzabar
2100 S. Preston St., 635-9227
zanzabarlouisville.com
$12; 9 p.m.
Even at its most aggressive, there is something inherently California-esque about classic West Coast punk, a pop sensitivity that imbues every song regardless of how aggressive or hardcore the number. Agent Orange is certainly no exception to this, playing a music that’s equally informed by punk and hardcore tropes as surfer rock for a vibe right at home there with the best of the Dead Kennedys — a chugging, riff-heavy form that doesn’t skip on the angst so part and parcel to the genre. That the trio has scored everything from skate films to video games is no accident, given the frantic energy found in their music. Joining them this Thursday are Midwestern punk rockers The Architects, who serve as a bit of a contrast if not in their liveliness than in their sonic intensity. —Syd Bishop

<music>
OCTOBER 22 – 23
Carolina Chocolate Drops
Clifton Center
2117 Payne St.
$29; 7:30 p.m.
There’s talk — and maybe a certain amount of truth — about a lot of today’s bands being dedicated students of old-timey American roots music, but few can really pull it off without sounding pretentious. (See: Mumford & Sons.) The Carolina Chocolate Drops, on the other hand, nail it. Their music radiates authenticity and a refreshing attitude at the same time. The thing is, they explore the depths of traditional music so intricately that it sounds scattered and genre-free — and I mean that in the best way possible — while still being familiar, organic and seemingly from a different world. You know, a simpler place — before we had to categorize everything.  —Scott Recker

<art>
Friday, Oct. 24
The Future is Unwritten
Revelry Boutique Gallery
742 E. Market St.
Free; 7:00 p.m.
It has been said that the boundaries between this world and the spirit world are “thin” during this time of the year — making it an ideal time for a tarot card-inspired group art show featuring work by a broad spectrum of unique local artists, including Adrian Wright, Ben Barnhart, Robby Davis, Dennis Pase, Sean McGlone, Lyndi Lou, Vinnie Kochert, Karl Otto, Bernhart Geyer, Bobby Hinkel, Rich Merwarth, Greg Mosier, Damon Thompson, Harrison Fogle, William Ragland, Megan Tierney, Petersen Thomas, Mark Parris, Meredith Cunnigham, Alex Kennedy and Phoebe Digges-Elliott. Join in and interact with this group as they amalgamate for one mysterious evening.  While you are indulging, the opportunity may arise to discover more about your own destiny with a tarot card reading from clairvoyant Anna Rae Foster.  —J. Cobb

<art>
OCTOBER 24 – 26
Oldham Arts on Quality Place
Arts Associations of Oldham County
20 Quality Pl., Buckner
222-9358
aaooc.org/arts-on-quality-place
Autumn is truly the time for great outdoor fairs; the kicker is they are usually accompanied by unpredictable weather. (Remember last year’s St. James Court Art Fair?) Oldham Arts on Quality Place doesn’t have to worry about that because it’s an indoor art show featuring quality regional artists — plus, it has the added benefit of supporting the Arts Association of Oldham County and the YMCA. The preview party, with dinner, an auction and artist booths, is on Friday, Oct. 24 from 6 – 9:30 p.m., and during the evening, Bill Samuels of Maker’s Mark will be presented with the Oldham Award of Excellence. Tickets are $75 for YMCA or AAOC members, $85 for non-members. The free public art show is on Saturday, Oct. 25 from 10 a.m. – 5 p.m. and Sunday, Oct. 26 from 11 a.m. – 5 p.m. —Jo Anne Triplett

<literature>
Saturday, Oct. 25
Poetry & Partying
VAULT 1031
1031 S. Sixth St., 500-1131
94creations.com
Free; 7:00 p.m.
The publication 94 Creations is throwing itself a Saturday night bash, including an open mic in the warm-up slot and then several readings from those who have found a home in the pages of the literary-alternative journal. There you’ll find Karen George, who is in the midst of a triptych of releases of her poetry (including the full-length collection “Swim Your Way Back” and next year’s chapbook, “The Seed of Me”). She’ll be reading along with Sheri L. Wright and three others who’ve found their work published in the journal as part of its mission to bring out “gritty, offbeat, marvelous works.”  —T.E. Lyons

<art>
Saturday, Oct. 25
‘Lucete en Textiles’ by Vida Nueva
FAF Gallery
602 S. Third St., 212-5108
fineartfirm.com
6 – 9 p.m.
Vida Nueva (“New Life”) is a cooperative of Mexican women textile artists founded in 1996. These Zapotec women from Teotitlan Del Valle are descendants of weavers, with patterns and techniques passed down through the generations. Some of the members of the group are coming to Louisville to be present at a special exhibition and sale of their work. “Lucete en Textiles” (“Brilliance in Textiles”) will feature more than 60 wool weavings created specifically for the Louisville audience. Proceeds from the sale will go to support Vida Nueva. If you wish to learn more about the artists and their culture before seeing the show, Vida Nueva members will be at Marketplace Restaurant, 651 S. Fourth St. at Theater Square, from 7 – 11 p.m. on Friday, Oct. 24; a $10 donation is requested. —Jo Anne Triplett

<film>
Sunday, Oct. 26
‘Valentine Road’
Village 8 Theatres
4014 Dutchmans Ln.
louisvillelgbtfilmfest.com
Free; 7 – 10 p.m.
“Valentine Road” was a favorite of the Louisville LGBT Film Festival screening committee, who wanted to show the documentary at last year’s festival. While scheduling conflicts made that impossible, and although the 2014 festival concluded last week, forces have finally aligned to make this screening possible and, even better, followed by a Q&A with director and producer Marta Cunningham. “Valentine Road” probes the social and economic forces behind the 2008 shooting of eighth-grader Larry King by his classmate, Brandon McInerney, in their California classroom. LGBT Film Festival chair Travis Myles says it’s a “touching, inspiring and maddening film” that “really touched” the screening committee. While the screening is free, you must register, as space is limited. Donations will be collected for Louisville Youth Group. — Laura Snyder

<story>
TUESDAY, OCT. 28
The Moth StorySLAM
Headliners
1386 Lexington Rd.
headlinerslouisville.com
$8; 8 p.m.
It’s a straight-up great concept: The StorySLAM is The Moth’s wildcard series, which means if you’re interested in the theme — published beforehand (this one is hunger) — you can put your name in a hat, and may be one of the 10 speakers who are chosen at random to speak for five minutes. No notes, no computers, just natural stories from your neighbors and maybe you. We all have a great story to tell and share more triumphs and struggles with the random people that we pass every day than we’ll ever know. So, if you’re into this sort of thing — and have the courage — throw your name into the mix and see what happens. You’ll probably surprise yourself. If not, drink a bit of booze and do it anyway. —Scott Recker

<music>
TUESDAY, OCT. 28
Paul McCartney
KFC Yum! Center
1 Arena Plaza
$29.50 and up; 8 p.m.
Every time I hear or see the name Paul McCartney, I think of the hyperbolic statement, “The guy can write a two-minute pop love song in his sleep.” Then I actually wonder if there’s any weird truth to that, because the former Beatles singer/bassist has written dozens upon dozens of them. Anyway, at 72, with his voice still incredibly intact — unlike some of his contemporaries — the guy is still worth the ticket price. And, if anything, in my opinion, the bit of added grit in his vocals more than makes up for his range being slightly shrunken. On top of that, he’s somehow a highly underrated instrumentalist. All of this coming from someone who thinks the Beatles are overrated. —Scott Recker

<art>
Through NOVEMBER 1
‘Train’ by Caren Cunningham
McGrath Gallery, Bellarmine University
2001 Newburg Rd., 272-2988
bellarmine.edu
Have you ever watched a train go by and think of it as a moving art gallery? The debate on graffiti continues, but we shouldn’t deny that some of it shows artistic talent and technique. If you haven’t thought it, don’t worry; artist Caren Cunningham has done the heavy lifting for us in her exhibition, “Train.” “Living next to a freight train for the past 25 years has been a love-hate relationship,” says Cunningham. “I have been dutifully photographing it for the past two years, and 1,500 trains later, I am still astounded by its size, speed and cargo capacity. With this exhibition, [I’m sharing] what I find appealing and interesting about the train so that the next time your journey is interrupted by one, it will be a more entertaining experience.”  —Jo Anne Triplett

<art>
Through NOVEMBER 8
Ray Kleinhelter and Rich Griendling
Galerie Hertz
1253. S. Preston St., 581-8277
galeriehertz.com
Gallery co-owner/artist Billy Hertz considers Ray Kleinhelter to be a “painter’s painter, by far the best painter in the region and this region is blessed with more than its fair share of exceptional painters!” Now, no one who knows Hertz describes him as unassuming, for he lives in a world of exclamation points. But he knows art, especially painting, so it’s a safe bet that Kleinhelter’s latest body of work, “Sycamore Shores/Modern Paintings and Drawings from the River,” is something to see. Actually, the gallery has a two-fer on display. Rich Griendling’s “Light Sculptures” is running concurrently with the Kleinhelter show (it ends November 15). The functional works are something different for Griendling. What started as an experiment now consists of 22 works that range in size from 12 inches to 6 feet. —Jo Anne Triplett