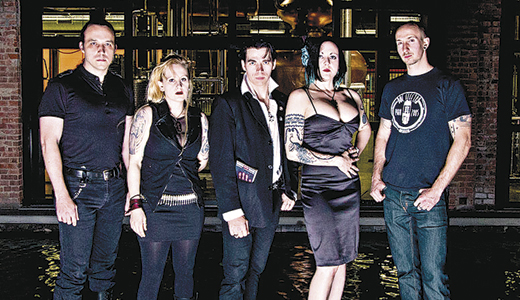 For the last decade or so, Nick Zammuto has been making some of the freshest, most lively indie music out there. First and foremost, Zammuto was one of the primary composers in the grievously underrated duo The Books, which composed strikingly coherent and accessible music built primarily around found and sampled voices and sound fragments. Striking out solo, or at least as the namesake for his most current project, Zammuto’s most recent compositions often defy easy comparison, with the only through line between his past and present work a measured restraint that, more often than not, results in works of profound beauty. Also playing is singer-songwriter duo Barnaby Bright, who seems to share that same sense of awe and wonder in the sublime found in much of Zammuto’s music. —Syd Bishop

Leo Kottke is among today’s foremost acoustic guitarists. His career dates back to the late 1960s. He released his first album (long out of print) in 1969, followed by “6- And 12-String Guitar” later that year on Takoma, the label founded by his influence, John Fahey. While primarily known for his instrumental music, Kottke also sings on occasion, including his well-known cover of Tom T. Hall’s “Pamela Brown.” His live performances are not planned out in advance, and he has noted that he goes with the feel of the moment. Kottke’s concerts invariably include his often dryly humorous tales, ostensibly as introductions for his songs. While most of his music is self-composed, he also has been known to pull out beautifully spellbinding versions of “Eight Miles High” and “Little Martha.” —Martin Z. Kasdan, Jr.

With an alt-country heart, a soulful twist and a Nick Cave-like dark presence, Caroline Rose has found a little space in contemporary music that is completely her own. She swirls melancholy, dreary indie with gentle folk and Americana sensibilities. She has this grit that comes off as cold and badass. But, even with those icy vocals, she’s easy to like. Her latest album, “I Will Not Be Afraid,” is a confident, powerful record that looks past honky-tonk, slips beyond R&B and doesn’t get too caught up in the present; it just kind of picks up bits and pieces along the way. It seems to simultaneously give a nod to and flip off a handful of genres. It’s not like she’s trying to reinvent the wheel, but I still can’t get a read on her — which is the balance I prefer.—Scott Recker

The Filson Historical Society on Third Street is located in the Ferguson Mansion, one of the city’s most historic and imposing structures. Its library, museum and collections are a tremendous resource throughout the year. On Halloween Eve, you have the chance to explore the Filson’s darker side at its Fright Night! You don’t have to be a history buff to enjoy the macabre artifacts and images from the Filson’s collections, but history buffs will especially enjoy this part of the evening. Dane Waters and Jonathan Wood will haunt the evening with spooky musical performances, and a psychic will read tarot cards for guests. The price of admission includes a “devilishly delicious punch concocted by the mixologist from Limestone Branch distillery” and a buffet. —Laura Snyder

“Crimes of passion” … “Corpse Revivers” … Nick Cave … Butchertown — Halloween for grown-ups, hosted at the Copper & Kings Distillery in Butchertown (and is there a better-named location for a Halloween event than Butchertown?). Nick Cave’s classic album “Murder Ballads” performed in its entirety by members of psycho-rock band Vice Tricks and gothic punks The Revenants performing as a single band. Sexy, sultry, dangerous American brandy cocktails inspired by songs from the album, developed by Louisville’s unique “Band of Bartenders,” the Black Irish Elvis, will be on sale, as well as their personal interpretations of the classic brandy cocktail, the Corpse Reviver (developed in 1796, no less). Atlantic No. 5/RYE will provide delicious food.  —J. Cobb

LEO readers, you voted Va Va Vixens as one of the city’s best performing arts groups this year (third place after Actors Theatre and the Louisville Ballet!), so you probably don’t need me to tell you that these modern-day vaudeville-style burlesque dancers put on an extraordinary show. Many fans find their just-naughty-enough style far more enjoyable and titillating than the full monty or the standard adult club performances. The Vixens are in an entirely different class. Onstage, these women (and a few men), who are of all body types, just flat-out own “it” — and your attention too! The Vixens will perform their new Va Va Variety! show Halloween weekend at the Art Sanctuary, home of the nonprofit arts collective that supports local arts. —Laura Snyder

Is there a $5 bill in your wallet right now? Save it. No cash? Pickpocket a friend. Because it’s not every night a ticket this good costs so little. This Saturday, comedians JT Habersaat, Junior Stopka and Jay Whitecotton deliver the laughs. Creator and curator of the Altercation Punk Comedy tours, Habersaat sticks to his roots with punk-influenced bits and a conversational flow. Junior Stopka’s mug regularly performs in comedy basements across Chicago, but don’t mistake his long locks for those of a metalhead. His off-the-wall humor and sincerity make for an endearing, hilarious act. Those easily offended probably shouldn’t stay for Jay Whitecotton’s set. But if you do, consider this Saturday a success. —Lara Kinne

Hitting the admirable but brittle ground that exists between emo and pop-punk, Tokyo Police Club has enough grit to fall outside the bubblegum realm — but, at the same time, they can produce hook-driven, straightforward music that catches the ear. Closing in on a decade as a band, the Canadian four-piece has the sort of quirky, almost whiny sound that dominated the mid ‘00s, but they can bring an energy and ambient quality that has been ahead of their time. Really, looking back, they are one of those bridge bands that connected where indie music was then and where it is now. —Scott Recker

“I wanted to have a three-dimensional exhibit since that isn’t something I usually get to do,” says Daniel Pfalzgraf, The Green Building’s gallery director, “so I asked three artists who I love and thought would be interesting complements to each other without fear of repeating styles or approach.” He needn’t have worried. Choosing Amy Chase, Patrick Donley and Brad White was a sure bet. Chase is a ceramicist whose larva-like forms have a built-in energy, making them seem ready to scurry from their resting places. Donley is well known around town for his mixed-media constructions; the pieces in this show feature telephone parts. White, who Pfalzgraf says “was a sculptor whose work was largely influenced by his family background in automotive work,” is now a custom motorcycle builder. —Jo Anne Triplett

There are many excellent ballet companies in the world, such as the Bolshoi Ballet and the Paris Opera Ballet. But Louisville is fortunate because it’s not necessary to travel outside the city to see dance, plus we have the added bonus of other ballet troupes coming here occasionally. The Dance Theatre of Harlem makes a point of traveling the world so that audiences can see diversity in classical ballet. Co-founder Arthur Mitchell was the first African-American principal dancer at the New York City Ballet, one of those excellent ballet companies I referred to earlier. They will be dancing “New Bach” by Robert Garland, “Dancing on the Front Porch of Heaven” by Ulysses Dove, “Vessels” by Darrell Grand Moultrie and, of special note, Balanchine’s “Tchaikovsky Pas de Deux.”  —Jo Anne Triplett

Winner of eight Tony Awards, “Sweeney Todd, the Demon Barber of Fleet Street” is worth seeing any time of year, but Halloween season is particularly fitting for this tale of a murderous London barber and a gruesome baker. The barber’s clients and the baker’s customers may come looking for a treat, but instead they’ll get a gory trick. “How about a shave? Welcome to the grave!” goes the libretto by Hugh Wheeler, set to the music of Stephen Sondheim. Artistic director John Leffert describes as the show as “a dark comedy and a satirical social commentary. While the show is for an adult audience, it won’t be gory.” By that, Leffert means, no blood onstage; what’s hidden in the pie is another story. —Laura Snyder

If the title of this exhibition made you think of Monty Python, printmaker Brian Jones would be okay with that. This “Life of Brian” refers to the retrospective of his long career that has led him to be the current president of the American Print Alliance. He’s one busy guy; besides teaching at IUS, he’s one of the founding members of Zephyr Gallery and co-founder of the Mary Anderson Center for the Arts. Another interesting fact about Jones: he’s colorblind. Explaining his process in IU’s Research and Creative Activity magazine, he states, “My prints tend to be painterly. I’ve spent a lot of time developing the monotype process because it involves layering color. I have to work with one color at a time. … Yellow’s the color that I’m always sure about.” —Jo Anne Triplett