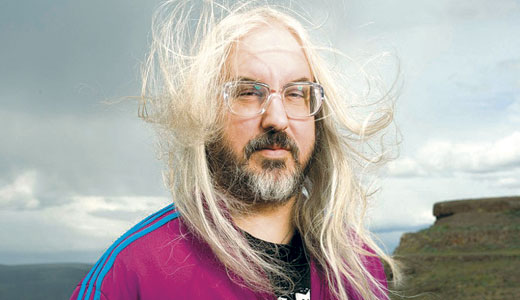 Interviewing J Mascis was exactly everything that I imagined it would be. Mascis took to my questions like a man more than well acquainted with speaking to the press: seemingly bored, like a sloth on lithium in a La-Z-Boy. For my money, a strong sense of presence was never Mascis’ strong suit to start, with a long history of music imbued with a sublime melancholy that fortunately comes across as light and relaxing as Mascis’ lethargic responses. Suffice it to say, Mascis is a man with plenty of guitar and songwriting chops but few words.

What makes Mascis worthy of press is his long and storied career, primarily as the head of the long-running Dinosaur Jr., which has risen from fuzzed-out college slackers to alt-indie icons. Starting in the early ‘80s with proto-hardcore act Deep Wound, Mascis, alongside Lou Barlow, formed Dinosaur Jr.; the band has worked with legendary labels like Homestead, SST and now Sub Pop. Touring solo for his newest album, “Tied to a Star,” Mascis maintains a very matter-of-fact approach to music that is zen in its simplicity.

It’s hard to say if he’s merely humble or shy. Mascis seemed borderline self-effacing regarding his progression as a musician, giving the rather reserved response that “I’m not really sure about that. It’s just kind of a fine-tuning over the years of everything. I don’t know if it’s better or worse. I hear things more, tiny details as it goes on. … It’s just like … I’m not sure.” Continuing, he added, “People just do it because they feel some sort of need to. That’s all I mean. So I don’t know what to tell them. … Just do what you feel like doing, what you wanna hear.”

His process is beautiful in its austerity. Mascis explains of his writing, “I just sit around, usually watching TV, and just wait for something to happen playing the guitar. I’m not much of a collaborative writer, I guess. I can help people with their stuff, but I’ve never really sat around and tried to write songs with people. I do usually hear the drums part, but not the bass, so I have a drum part, but not a bass part.”

Given his role as the through line in Dinosaur Jr., the only member to remain throughout every album, Mascis has plenty of experience with collaboration. He believes, “It’s hard, because you don’t really want music to be too democratic, because you don’t want it to suck in the name of democracy, so sometimes you have to hurt people’s feelings, because you’re trying to make good music as the first priority.”

It’s that dedication to craft that informs his music. With his newest effort, Mascis set some simple rules — limitations that were ultimately ignored to service the material — that dictate that above his laid-back melancholy, the most important thing is making a great song. He gave a subtle laugh, noting of his self-imposed constraints, “Yeah, I mean, I tried not to have drums, but then I failed a few times. It definitely helps to focus on doing something because … especially these days you could just do anything with all the technology, so it’s good to have some limitations to work within.”

So what is the difference between his solo efforts and Dinosaur Jr.? Mascis offers the simple truth that it is “acoustic versus electric. When I’m writing songs, I have that in mind, just ‘Is this something Murph [Dino drummer Emmett Murphy] could play?’ ‘Does this sound good live?’ And solo, I just try to keep it as acoustic as possible.”

Of his newest album and subsequent tour he adds, “[‘Tied To A Star’] is kind of a follow to ‘Several Shades of Why,’ just doing an acoustic thing. It’s just a break from Dino.”

Even still, he manages to at least have a little tension pre-show. Playing alone on this tour, Mascis admits, “It’s definitely more stressful and stuff.”

For Mascis there is no objective truth to his music; the music should be able to stand alone. Regarding his lyrical content, he gave the rather pragmatic explanation that “you know people get out of it whatever they want. It’s hard for me to say. I usually do the music first, and then might have a few lyrics first … so the words have to fit into the music.”

Continuing this thought, when asked about the meaning of the album’s title, he simply stated, “Nothing.”

Mascis believes that a good show is “a feeling you have. If you liked it, then it was a good show. If you didn’t like it … well, it could still be a good show to some people. I’m not sure.” Continuing, he reminisced about his earliest concert memories both as an observer and as a performer. “My first rock show … I say Ian Hunter opening for J. Geils. I remember liking it, but I don’t remember too much about it. Playing, I don’t really remember.”

See what Mascis is all about in person this Saturday at Zanzabar, and stay for the relaxed vibe of his solo work. Opening are fellow Sub Poppers Luluc, who offer a kind of mellow Simon & Garfunkel element to the show, replete with melodious femalefronted vocals and delicate guitar/piano work. Tickets are $20 and the show starts promptly at 9 p.m.